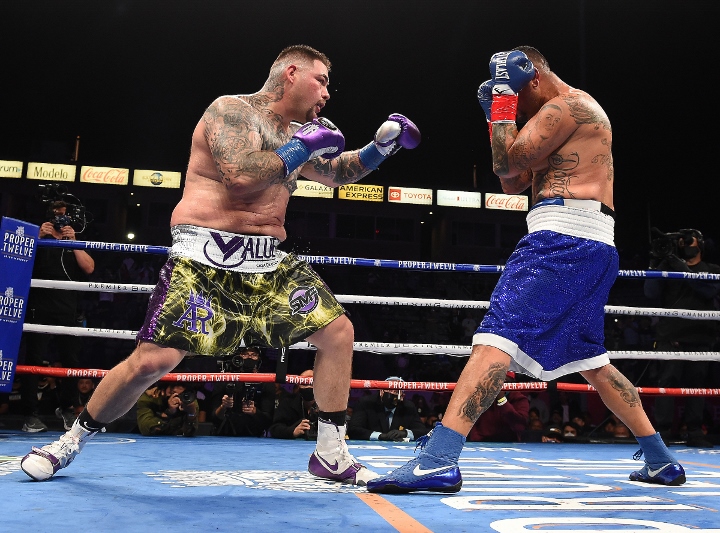 Chris Arreola was impressed by the version of Andy Ruiz Jr. that survived serious trouble early in their fight Saturday night and came back to beat him.

The veteran heavyweight believes the reason Ruiz experienced so much difficulty early in their 12-round fight, though, was that Arreola was better than Ruiz and his team anticipated. Arreola dropped Ruiz to one knee with a right hand early in the second round and nearly sent him to the canvas again with a left hook early in the third round.

Ruiz recovered, regained control of their fight in the fourth round and comfortably beat Arreola in their FOX Sports Pay-Per-View main event at Dignity Health Sports Park in Carson, California. Arreola ripped the judges for scoring Ruiz such a wide winner, but the 40-year-old contender took some solace from his strong showing.

The 31-year-old Ruiz (34-2, 22 KOs) wasn’t better than Arreola anticipated, despite that the former heavyweight champion came in 27½ pounds lighter than he was when he lost his 12-round rematch to Anthony Joshua by unanimous decision 16 months ago in Diriyah, Saudi Arabia.

“No, I was better,” Arreola said during their post-fight press conference. “That’s the key. I was a better fighter. They didn’t expect this Chris Arreola. You know, no disrespect to him. You know, he came out in great shape and he was in great shape. This fighter would beat AJ, would easily knock out AJ. But he couldn’t do that sh!t to me because I am a better fighter. I came in great condition. I was ready for everything. Everything they had to offer, I was ready for it, man. And f—— judges, suck my d!ck!”

Judge Zachary Young gave Arreola only the second and third rounds and scored their fight 117-110 for Ruiz. Judges Lou Moret (118-109) and Pat Russell (118-109) credited Arreola with winning just one round apiece, the second.

Nevertheless, Arreola (38-7-1, 33 KOs, 2 NC) was much more dangerous than the odds suggested. Ruiz entered the ring a 25-1 favorite, according to most Internet sports books.

Arreola acknowledged that Ruiz deserved to win, but the Riverside, California, native was outraged by the official scoring.

“They honestly need to have some accountability,” Arreola said. “They need to show me how, why they judged the rounds like that. Like honestly, how? How, dude? A lot of punches, he was hitting my gloves, like this. And yeah, did my glove hit my face? F—, my own glove hit my face. Sorry. But dude, his glove never touched me in my face, in order for them to give him that f——- round, man.”