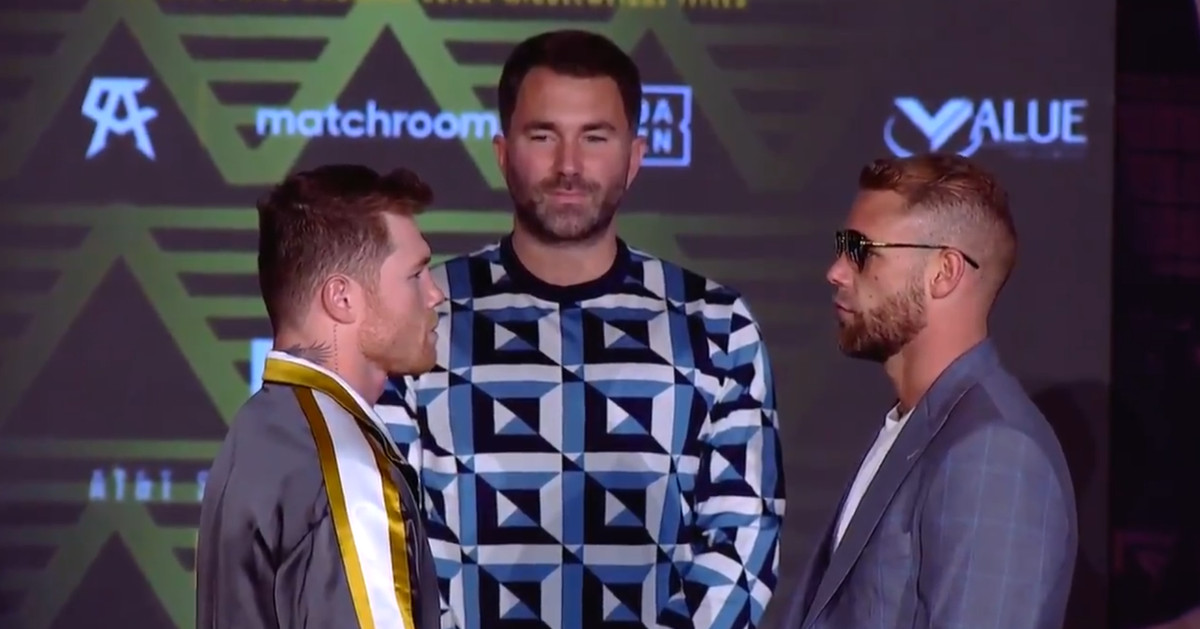 Canelo Alvarez and Billy Joe Saunders had something of a tense photo shoot faceoff on Wednesday, but at today’s press conference, you could feel the seriousness from the fighters, but everyone was on their best behavior for the most part, excepting possibly Tyson Fury and the Saunders supporters in the back of the room.

Canelo (55-1-2, 37 KO) brings the WBC and WBA super middleweight titles to the fight, with Saunders (30-0, 14 KO) toting the WBO on the way in, with the winner leaving with all three and just one piece — Caleb Plant’s IBF belt — away from an undisputed championship.

Alvarez continued to balk at the idea that past fights against slick southpaw opponents could indicate trouble for him in Texas.

“Saunders is a great fighter. He has a lot of abilities and he’s also a southpaw, but I’m not the same fighter of six or seven years ago, and Saturday I will show that,” Canelo said through an interpreter. “I’ve been involved in a lot of big fights, and this is just another day at the office. I come to win.”

How to Watch Canelo vs Saunders

Saunders, too, says he’s coming to win, and specifically pointed out that he doesn’t think many opponents have against the Mexican superstar recently.

“I’ve been boxing since I was five years old. We can all have the rough, tough talk growing up as kids, but I’m here for a reason, and that’s to win. It’s not about fame, not about anything else, not about publicity — win,” Saunders said.

“I don’t think we’ve had somebody come to win (against Canelo) for a very, very long time. We’ve had a lot of people turn up, fly in, collect checks, and fly out. But we haven’t had the heart and soul and the IQ that I bring into the ring on Saturday night to win.”

But Saunders also didn’t try to tear down what his opponent has achieved, saying he respects him as a fighter.

“He’s done brilliant things for boxing. He’s a good champion, but there’s a time in life where you get tested,” he said. “And sometimes when you forget where you come from and forget all them hard things that’s brought you to where you are, sometimes that can make it difficult on yourself. I just think he’s going to be bumping into the wrong man on Saturday night. As long as I get treated fairly, we’re very happy with the judges, I’m sure it’s all going to be fair — I’m looking forward to a very, very good fight, but most definitely the win.”

Rocha Knocks Out Ahsie In Seventh
AWKWARD! Artur Beterbiev BITES BACK at question ‘YOU WANT TO BE ANGRY WITH US?!’ | #shorts
Fernando Martinez-Jade Bornea: IBF Title Fight Purse Bid Rescheduled For February 14
Photos: David Benavidez, Caleb Plant – Trade Words at Heated Press Conference
Editor’s Letter: Yarde’s performance against Beterbiev demonstrated not only his quality but the importance of experience