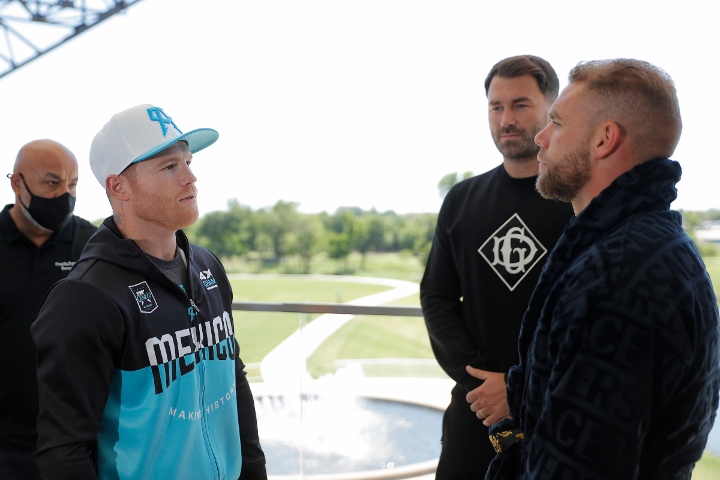 The WBA, WBC, WBO world titles will be at stake.

Saunders has been spending a lot of time out in Las Vegas with WBC heavyweight champion Tyson Fury and his head trainer, SugarHill Steward.

SugarHill, who is one of the world’s most respected trainers, gave his take on this weekend’s fight and believes Saunders needs to knock Canelo out – as opposed to trying to last the duration for what he feels is an unlikely points victory.

“There is nothing else to do. He can outbox someone for ten or 12 rounds and the decision goes the other way still because it’s somebody else’s opinion and decision.  So why can’t Billy be the deciding factor?  But it takes a lot more than just saying it, you have got to know how to put it together. You can think about the knockout all you want, but you’ve got to know how to actually do it.

“This is the only way. Shoot for the stars and if you fall short you’ll at least land on the moon – is that how the saying it goes? Why would you have a plan or a thought to say that ‘I’m going to go in there and outbox a guy for ten rounds’?  Why the hell would I think something like that? I’m selling myself short. Why would Billy not go in there and try and knock this mother—— out? That’s my mentality.

“At least if you do that and come up short, you’ve tried every round. You have tried to dominate Canelo by throwing hard shots – and yes, maybe you don’t get the knockout, maybe he was too tough.  But if you settle to outbox Canelo for 12 rounds – you don’t pass. If you’re reaching for something higher and fall short, you still pass. That’s what I love doing and that is what I teach. I love putting that plan together. That’s the only thing I know.”