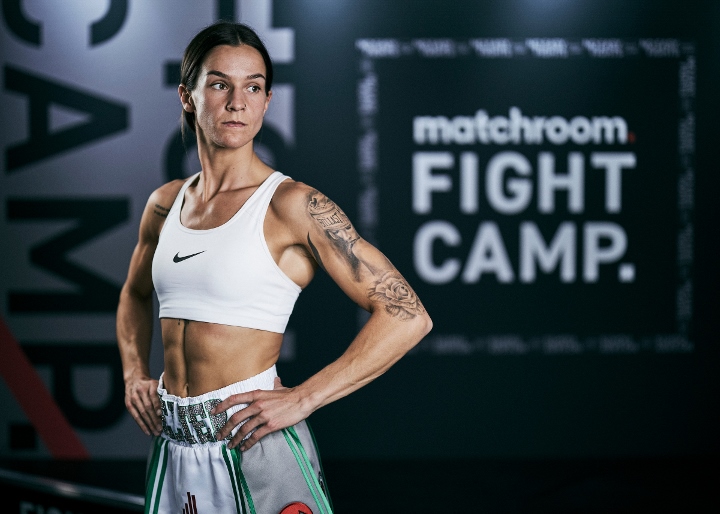 Terri Harper is unable to move forward with a scheduled WBC, WBA, IBO super featherweight unification against Hyun Mi Choi. The fight was taking place next Saturday night in Manchester.

The unbeaten Harper suffered a hand injury during a sparring session.

Harper, 24-years-old, injured her right hand several months back when he stopped Katharina Thanderz in a mandatory defense back in November.

“Devastated to hear from [trainer and manager] Stefy Bull that Terri Harper damaged her hand in her final spar,” promoter Eddie Hearn stated.

“She will undergo an operation next week and will return later this Year. Keep your head up Terri – back stronger!”

Harper is hoping the contest can be rescheduled to a later date in the year.

“Absolutely devastated to announce that in my last spar of camp I have damaged my hand again. Heartbroken is not the word,” Harper said.

“Myself and my team have worked so hard in the last five months to ensure I had the best recovery and had a full training camp with no problems with my hand.

“I’m only 24-years-old with many big nights ahead. This is just a small setback and I will be back stronger than ever. Hopefully this unification can happen before the end of the year, it’s still my dream to unify and be on the road to undisputed.”

“I walk it like I talk it” Dennis McCann had full confidence he would become the new champion
Photos: Fabio Wardley Blasts Out Nathan Gorman in Three Rounds
Pascal vs Eifert eliminator set for Feb. 9 in Laval
Tyson Fury On Derek Chisora Fight: “If You Want To Tune In, Watch It. If You Don’t, F–k Off”
Dave Allen: Why Deontay Wilder GETS KOd by Dominic Breazeale (Quick Take)