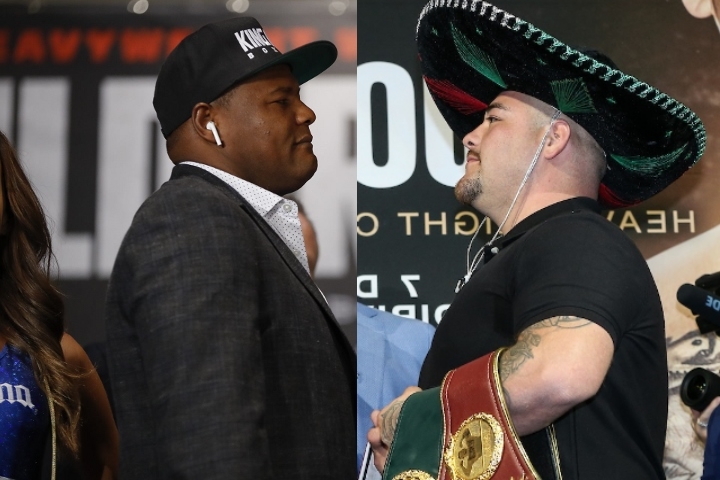 Luis Ortiz appreciates the fact that Andy Ruiz is at least looking in his direction.

The next step—actually securing such a fight—has always been the hard part for the two-time time challenger.

California’s Ruiz (34-2, 22 KOs) openly discussed options for his next fight almost immediately after returning to the ring this past weekend. The former unified heavyweight titlist soundly outpointed Chris Arreola (38-7-1, 33 KOs), recovering from a 2nd round knockdown to soundly outpoint the three-time heavyweight titlist this past Saturday at Dignity Health Sports Park in Carson, California.

Ortiz was among the interested observers in attendance for their Fox Sports Pay-Per-View main event, with designs of next facing the winner since so few in the division are willing to call out the top-rated contender by name.

“Congratulations to Andy Ruiz on overcoming the early (knockdown) to win the fight,” Ortiz told BoxingScene.com. “But he didn’t really accomplish anything other than getting back in the ring. He chose Arreola for his comeback fight, while in my case nobody chooses me. I’m not even left with an Arreola, and that continues to frustrate me.

“I would love nothing more than to face Andy and prove that I am the best Latino heavyweight in the business.”

Miami’s Ortiz (32-2, 27 KOs; 2 NC) has not fought since a 1st round knockout of overmatched Alexander Flores last November atop a Fox-televised main event from Microsoft Theater in Los Angeles.

The bout was the first for Ortiz since a repeat knockout loss to then-unbeaten WBC heavyweight titlist Deontay Wilder (42-1-1, 41KOs) one year prior at MGM Grand Garden Arena in Las Vegas. The Cuban southpaw was well ahead on the scorecards before running into a laser right hand from Tuscaloosa, Alabama’s Wilder to end their Fox Sports PPV headliner in an instant, less than 20 months after suffering a 10th round knockout in their first fight.

The repeat loss to Wilder came just two weeks prior to Ruiz conceding his collection of heavyweight titles to Anthony Joshua in Dec. 2019.

Ruiz dropped a lopsided decision to Joshua just six months after knocking out the previously unbeaten Brit in the 7th round of their June 2019 heavyweight title clash at Madison Square Garden in New York City. The feat saw Ruiz become the first Mexican boxer ever to win a piece of the heavyweight crown, which also represented his last win prior to this past Saturday. Ruiz ballooned up to 310 pounds after the Joshua rematch, before joining forces with 2019 Trainer of the Year Eddy Reynoso and coming in at a much slimmer 256 pounds for his fight with Arreola.

“Andy showed grit and signs of a champion,” German Caicedo, Ortiz’s trainer told BoxingScene.com of Ruiz’s most recent win. “Congratulations to him.”

After the fight, Ruiz noted that there remains work to be done before once again pursuing the heavyweight titles. The 31-year-old California native also noted that a fight with Ortiz would make a perfect next step.

“We’ve just gotta talk to [adviser] Al Haymon,” Ruiz said during the post-fight press conference. “I think that would be an exciting fight as well… me and Luis Ortiz.

Having long sought to add another notable name in the win column, Ortiz and his team are content with entering such a fight straightaway.

“Wilder aside, Luis hasn’t been involved in the really interesting matches in the division that could have provided excitement,” notes Caicedo. “Tyson Fury, Dillian Whyte, Alexander Povetkin, Derek Chisora, Joseph Parker, Charles Martin, Adam Kownacki—all of these guys have fought each other and some have fought each other twice. But they can’t face my guy once, they have all ducked when offered the challenge to fight him.

“We’re not here to waste time. Andy said he wants the fight. Like Wilder, we do believe he will take the challenge, he’s willing to take that step up in order to become champion once again.”

Meanwhile, Ortiz is seeking the best way to inch closer towards a third shot at becoming Cuba’s first-ever heavyweight champion.

“I hope Andy does accept the people’s choice and the obvious choice,” notes Ortiz. “This is the real fight for best Latino heavyweight!”

Dillian Whyte: I Won Clearly, So Why Would I Consider A Rematch With Jermaine Franklin?
Weekend takeaways: Prograis is back, Whyte, more
Jermall Charlo Approaches Dmitry Bivol For Catchweight Fight
This Weekend’s Biggest Fight Doesn’t Involve Heavyweights
Canelo Alvarez On Soccer Star Lionel Messi: “He Better Pray To God That I Don’t Find Him”