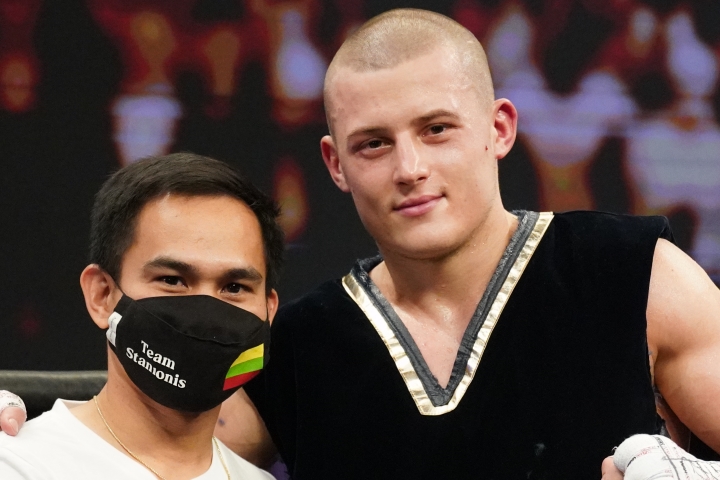 The unbeaten Lithuanian went 12 rounds for the first time while winning a unanimous decision against Thomas Dulorme, the most proven opponent he has faced. Dulorme boxed well in his first fight with respected Cuban trainer Ismael Salas in his corner, but a relentless Stanionis’ pressure wore him down during the championship rounds.

“I think I showed I can compete with top guys,” Stanionis told BoxingScene.com. “It’s the main thing that I wanted to prove, that I can compete with top guys. It was a good experience to go 12 rounds, because I didn’t have confidence because I never went 12 rounds. I wanted to know about myself, how I can dig deep. Dulorme in the press conference said he will see how I will swim, how he will take me to the deep waters in the eighth, ninth round, 10, 11, and see how I will do. So, I think I did very good. I’m proud of myself.”

The 26-year-old Stanionis, a 2016 Olympian, had not competed past the ninth round in a fight prior to Saturday night. Puerto Rico’s Dulorme (25-5-1, 16 KOs) has gone the distance in 10-round fights six times and 12-round bouts twice.

“I felt good,” Stanionis said. “I had a lot of stamina, but I still need to improve, you know? But now I have experience. With hard fights comes experience. I’m just learning in this process.”

Stanionis opened a cut over Dulorme’s left eye in the 10th round and felt he hurt the veteran contender several times in the later rounds.

“He was almost out, so I hit him with good shots,” Stanionis said. “He was this close [to being knocked out], but I didn’t finish him. I think in the 10th, 11th and 12th rounds I was almost close to knocking him out. But he’s a warrior and I can’t take anything away from him. He’s a tough guy. He has experience and he came into this fight with nothing to lose, but everything to gain because he lost his last fight [to Jamal James]. He had a good opportunity. But the good fights happen when two guys have a lot of tools.”

The developing Stanionis didn’t mention a specific opponent, though he is ready to take another step up in class in his next fight.