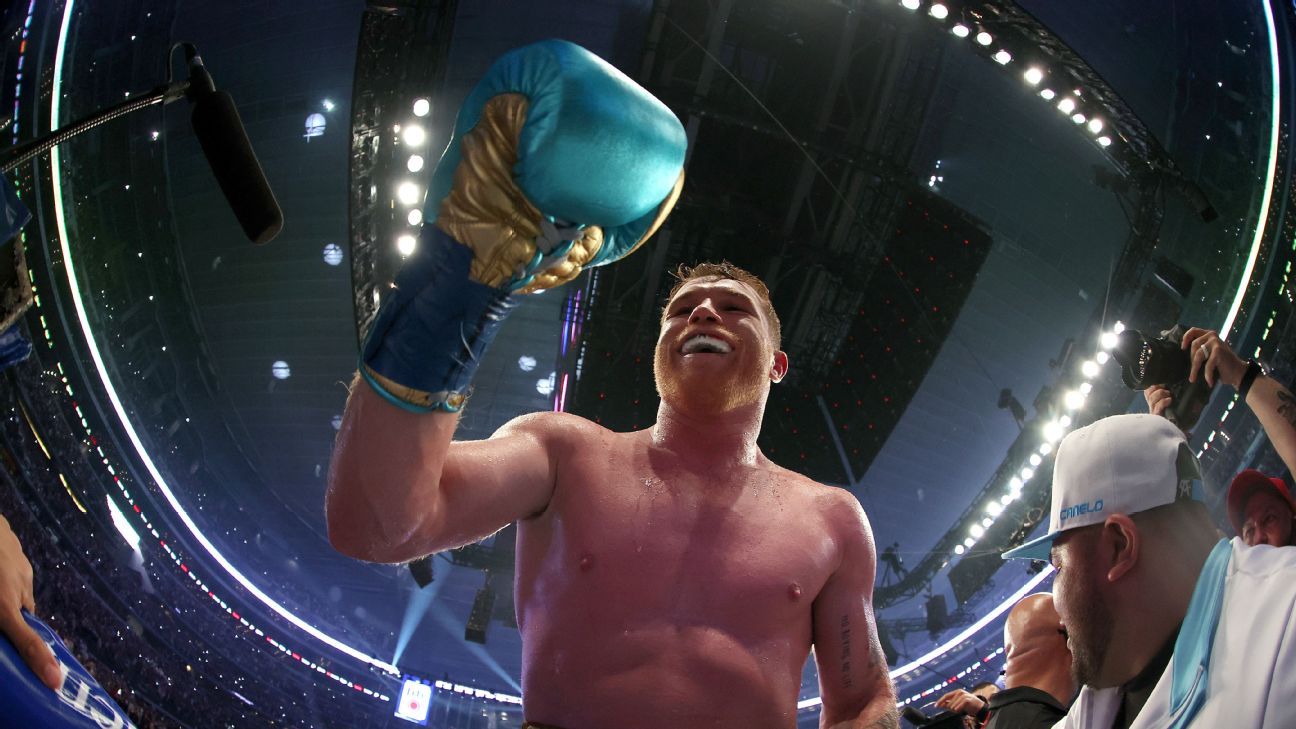 Canelo Alvarez once again showed why he’s almost unbeatable by making Billy Joe Saunders quit in his corner after eight rounds. Is Alvarez the current best fighter in the world? There’s a good argument to be made for the super middleweight unified champion.

A former great, Floyd Mayweather, killed two birds with one stone during the press conference to announce his exhibition match against YouTube sensation Logan Paul. Previous to that event, Mayweather got into an altercation with Logan Paul’s younger brother Jake, also a YouTuber turned boxer, and it looks like a boxing match between them could be in the works for later this year. Mayweather could cash in on those two fights without taking much of a risk.

In a real fight with real stakes, Jose Ramirez and Josh Taylor will unify all four major belts in the junior welterweight division, and the rumor is that the winner will vacate the belts and move up to the welterweight division to look for bigger challenges — namely titleholder Terence Crawford. That could be a megafight in the making.

That also opens a door for junior lightweight undisputed champion Teofimo Lopez to go up in weight and collect some silverware at 140 — that is, as long as he defeats mandatory challenger George Kambosos Jr. on June 19.

Real or Not: Canelo Alvarez is currently the best fighter in the world

Bradley: Real. Canelo Alvarez without question is the No. 1 pound-for-pound fighter in the world. His performances inside the ring have been unprecedented. Canelo is a master chess player. Physically, he has always been strong, but finally, he now believes he is the best fighter in the world. Furthermore, no one should even think he is cheating the sport as he is enrolled in the most extensive year round anti-doping agency, VADA.

Canelo Alvarez will become the undisputed super middleweight champion of the world with three title victories in a time span of nine months — which is mind-blowing, if you ask me.

Real or Not: The crowd for Canelo Alvarez-Billy Joe Saunders means big-time boxing is back

Baby: Real. I’ll be quite honest — it felt surreal to be around more than 73,000 fans to watch Alvarez bust up Saunders’ right eye in a TKO victory. It was the biggest crowd to ever watch a boxing event in the United States, and more importantly, one of the largest gatherings since COVID-19 became a pandemic.

The scenes during Canelo’s ring walk said it all. As Grammy-winner Pepe Aguilar and the rest of his mariachi band performed on the stage inside AT&T Stadium, you could feel the buzz boxing was missing in the absence of fans. Former four-division champion Jorge “El Travieso” Arce, who was working a Spanish-language broadcast ringside, stood on his chair to record the scenes on his phone.

The crowd’s magnitude indicated that large-scale boxing and sports in the United States could be on the way back to “normal.” Several officials across multiple sports around the country have indicated other sporting events could be at full capacity soon, too.

Real or Not: The winner of Jose Ramirez-Josh Taylor will move up to 147 to face Terence Crawford

Parkinson: Real. After unifying the belts in the biggest fight of their careers, the only option will be for the winner of the May 22 clash in Las Vegas to move up in weight and look for bigger challenges. There are limited options at junior welterweight for either Ramirez and Taylor after their clash to decide the undisputed champion. Between them, they have beaten the next three contenders in ESPN’s latest divisional rankings: Regis Prograis, Jose Zepeda and Viktor Postol. Taylor has beaten Prograis, and Ramirez has beaten Zepeda (both by majority decisions) and fights against either of them would lack major interest while carrying outsized risk.

Both Ramirez and Taylor, have beaten Postol, and rematches against the 37-year-old would not be met with widespread excitement. Also, most of the top fighters at lightweight who have the potential to move up are likely to stick around there for the time being, as there are multiple big fights to be made at 135 pounds.

Moving up a weight class offers a fresh challenge of becoming a two-weight world champion, and perhaps more importantly, a much bigger fight at 147 pounds than what they could make at 140 pounds — against Crawford who, like Ramirez and Taylor, is promoted by Top Rank.

If Crawford loses patience over a unification fight with Errol Spence Jr., or a proposed title fight against Manny Pacquiao doesn’t materialize, then facing the winner of Ramirez-Taylor comes into play and is an easy fight to make. The chance to beat Crawford, who started his career at lightweight and is two inches shorter than both Ramirez and Taylor, would be appealing, as a win would elevate Ramirez or Taylor in the pound-for-pound lists as well as boosting their bank balance in a major way.

Real or Not: Floyd Mayweather will defeat Logan Paul and face Jake Paul next

Parkinson: As long as Mayweather, retired as a serious boxer but still taking money in exhibition bouts when he can, is in shape he still, at 44, has enough talent and boxing intelligence left to defeat novices like brothers Logan and Jake Paul — on the same night, if he wishes.

The International Boxing Hall of Famer will face YouTube star Logan Paul in a pay-per-view event on June 6 at Hard Rock Stadium in Miami. After Mayweather clashed with Jake at a press conference to publicize the event with Logan, there is a narrative ready and waiting to be fulfilled for a second instalment against the 24-year-old YouTuber Jake (3-0). Jake, who grabbed Mayweather’s cap in a scuffle at the press conference, will whip up interest in a lucrative fight against the former pound-for-pound No. 1 via his social media channels. Mayweather won’t be able to resist another massive cash-grab.

Real or Not: Teofimo Lopez will vacate his 135-pound championship and fight for a 140 pound title after his fight with George Kambosos Jr.

Baby: Not real. It wouldn’t make much sense for Lopez to vacate his belts at lightweight when he’s one title away from becoming the undisputed champion (yes, Devin Haney still holds the WBC strap in the 135-pound division). Also, Lopez is facing Kambosos in a mandatory defense, which seems like a large waste of time if he’s not planning on staying at lightweight.

When Lopez decided to take on Vasiliy Lomachenko, Teo was at the front of the trend of young fighters in the division increasing their competition level. It showed he wanted to accomplish big things at a young age.

I can’t think of a better run than being the undisputed champion in two different divisions in the span of 12 months. And Lopez has an opportunity to make that happen.

Real or Not: Vasiliy Lomachenko and Gervonta Davis will face each other after their fights on June 26

Rothstein: Real, because why not? At this point, the entire matchup situation at 130 and 135 seems to be in flux, but should Lomachenko and Davis both win their June 26 fights, then why not try to get them in the ring? Of course, promoter issues could always come into play, and at least one of the two — if not both — may have more interest in trying to fight Teofimo Lopez (provided he beats George Kambosos Jr. next month), but it would be a fun matchup where the winner would have a clear claim to a title shot.

With Ryan Garcia taking some time away to deal with personal issues (which, by the way, he should be commended for being open about doing), the options for big fights are Devin Haney, Lopez or…each other. The wrinkle could be if either Oscar Valdez or Jamel Herring wants to fight Davis at 130, which could be more interesting to Davis as well.

A lot of permutations, but if the fight is available, promoters should do what they can to make it happen.