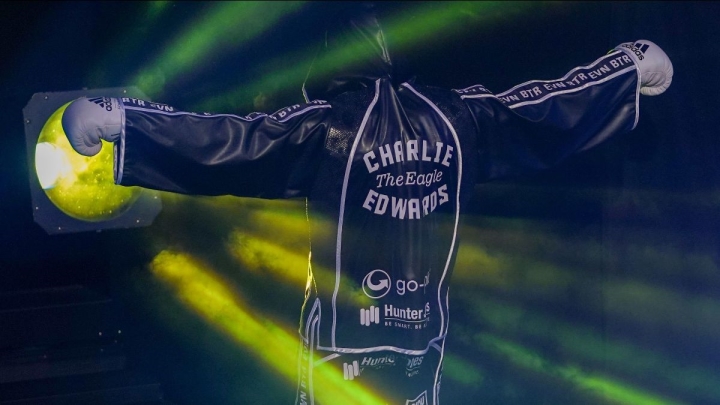 ‘THE EAGLE’ Charlie Edwards has migrated to Portugal and believes his new nest in the Algarve is the ideal base as he plots his flight to the top of the super-flyweight division.

Charlie jumped two weights to Bantamweight for his Queensberry debut last September when he outpointed Kyle Williams but is planning an attack on the 115lb Super-flyweight division when he returns to action.

Charlie said: “This is the first time in 17 years that I have taken two months off completely. It has given me a new drive, new hunger and new ambition.

“I am training now and going to start more boxing training so I can get my flow back.

“This journey is going to excite me even more. Right now, I am in a very good place and I’m looking forward to getting back in.

“My plan is to have a tough ten or twelve rounder for an International title when I return and then kick on.

“I have been back punching, doing little bits, strength work and feel revitalized. I have lost nothing.

“It has been nice to reset myself and move to a country where I feel happy and confident in myself again.

“The plan is to stay here in Portugal. My Missus and I have decided to move the family here. We want our daughter to grow up in a nice environment.

“Becoming a Dad has been challenging. Being locked down in England wasn’t the best thing for us so coming out here has me happy and thriving.

“Once our house has been sorted, which will be sooner rather than later, I can push on with my career.”

Edwards revealed he has left the Steel City gym in Sheffield where he was trained by Grant Smith and will do most of his training in Portugal.

He will either base himself in England or the United States for the final eight weeks of camp.

He explained: “I have a number of ideas and thoughts in my head and I am not going to rush. I have a friend who trains coming out here to get me fight fit.

“I have achieved all that I have set out to achieve on my career bucket list in the UK so I would like to train here, set up my own gym and eight weeks before a fight I may go to America.

“I also have another British coach in mind who I do want to try out in the UK but I don’t want to go into details yet.”

Edwards (16-1, 6KOs) admits he suffered mentally with the stresses of getting down to Flyweight and the Croydon man relinquished his World title shortly after a no-contest against Julio Cesar Martinez in August 2019.

He said: “I have left the dark days behind me. I suffered a little bit especially around the Martinez fight – making Flyweight and putting my health on the line.

“I wasn’t enjoying it and fell into a bit of depression with the boxing side of things through having to make that light weight.

“I came out of the other side and it was still a challenge getting through to my next fight which was my Frank Warren debut.

“I got through that, won every round, jumping two weights to bantamweight and now I’m in Portugal I feel happy, revitalized and like the old Charlie Edwards where I can dedicate myself.

“When I do get back I will go away, focus and reach the top levels again.”

Whyte outpoints Franklin in later rounds for win
Shakur Stevenson Blasts Isaac Cruz: ‘I Turn Pits Into Poodles’
Dillian Whyte: I Won Clearly, So Why Would I Consider A Rematch With Jermaine Franklin?
Canelo Alvarez On Soccer Star Lionel Messi: “He Better Pray To God That I Don’t Find Him”
‘WHY LAWRENCE OKOLIE LEFT 258’ – Will Harvey on EDDIE HEARN BATTLE, social posts