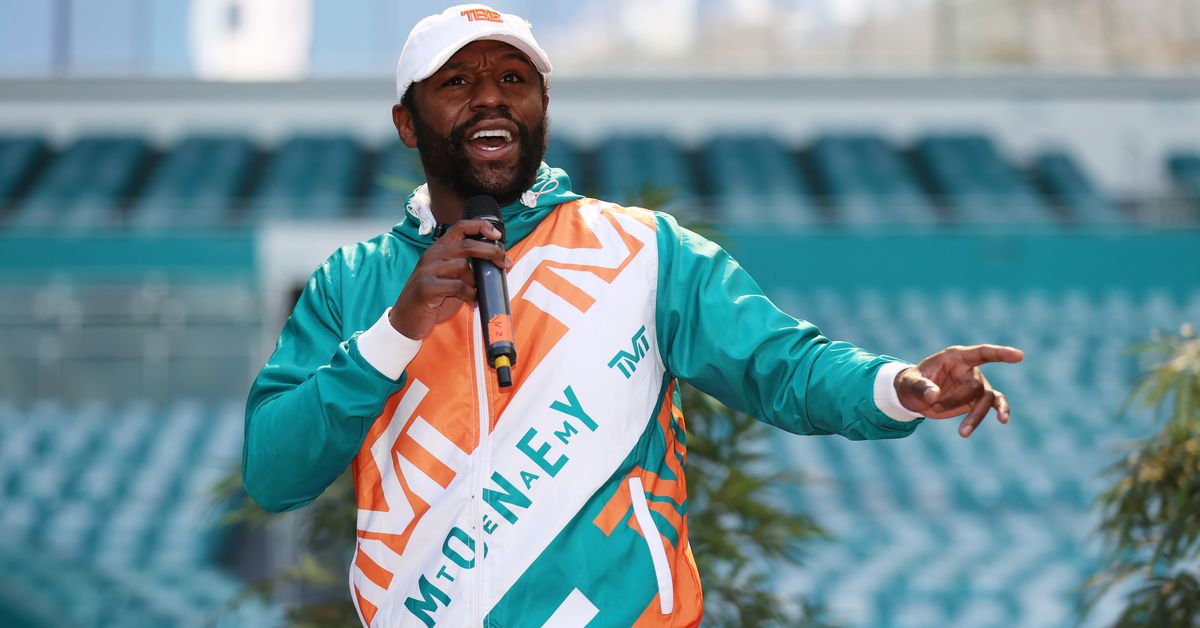 A new venture connected to Floyd Mayweather’s upcoming exhibition fight may put the fighter at risk of violating a settlement agreement with the US government. Earlier this week, a team including Mayweather announced a non-fungible token (NFT) offering connected to his June 6th exhibition against Logan Paul.

Bad Left Hook recently covered the announcement and results of a similar Canelo Alvarez vs. Billy Joe Saunders NFT offering from DAZN. But in this case, there’s an additional wrinkle: Mayweather is currently bound by a settlement agreement with the United States Securities and Exchange Commission (SEC) that prevents him from promoting financial securities.

Back in Nov. 2018, Mayweather and the SEC settled a case alleging the boxer illegally promoted three securities connected to Initial Coin Offerings (ICOs), a category of cryptographic asset different from NFTs. The terms of the settlement required Mayweather to pay the government $614,775.67 in restitution, penalties, and interest. Mayweather was also prohibited from promoting any security, “digital or otherwise,” for a period of three years.

There are no present rulings or guidelines determining whether NFTs are legally “securities” in the eyes of the SEC. But that was once true of ICOs as well, until Mayweather and DJ Khaled became targets of the first ICO case ever pursued by the SEC.

Vincent Molinari is a member of the Digital Assets Board of the US Chamber of Commerce and the founder of FINTECH.TV, a digital media platform dedicated to finance, technology, and blockchain. He spoke with Bad Left Hook about the current state of the industry from a perspective based on 30 years in finance and technology, with a particular recent emphasis on crypto and digital assets. He sees similarities between ICOs in 2017 and NFTs today.

“You had great technology, and great promotion of assets that people purported not to be securities.” Molinari said. “And yes, you can say that, but when you look at what it’s doing, all of a sudden the game changes.

“There is tremendous opportunity for investors and new products driven by technological advances. But unfortunately for many people, they learn it doesn’t negate the Securities Acts of 1933 and 1934.”

Molinari pointed to signs of future NFT regulation from the SEC. Among them, communications known as Section 21(a) reports — a system the SEC uses to indicate areas of interest where enforcement is likely to follow.

“I think no question. Through 21(a) reports, through speeches of the commissioners, there’s great messaging in those about what they’re thinking. Doesn’t always turn into securities law, but it has been part of a process in the past,” Molinari said. “I think there’s going to be an increase in enforcement, and I think you’ll see a similar track around NFTs that will fall into the bucket of being deemed as securities.”

If Mayweather has broken his settlement agreement through this promotion, the consequences could be severe. On top of the money he’s already paid and any additional new fines, violations of SEC regulations can carry penalties of up to five years in federal prison.

Mr. Molinari did not comment on Mayweather’s specific situation, but did share a general opinion about the risks of engaging in not-yet-regulated areas while part of an ongoing SEC settlement.

“In the absence of clarity, one should exercise caution. I would say any time an entity is under a microscope, or heightened supervision, asking forgiveness or pleading naivete are not hallmarks of a defensible position when it comes to securities regulation. So, an abundance of caution would be the typical guidance.”

So, what makes something legally qualify as a “security”? That is an area of expertise for Dr. David Yermack, Chairman of the Finance Department at NYU’s Stern School of Business, and a Director for the NYU Pollack Center for Law and Business.

Dr. Yermack was kind enough to spend over half an hour on the phone with Bad Left Hook, patiently explaining relevant legal concepts and essential details on securities and cryptographic assets.

The test that the SEC uses to determine if something can be classified as a security comes from a 1946 Supreme Court decision in a case about orange groves in Florida. It’s called the “Howey test”, and it has four components:

First, the investment of money. Given that they are being sold for money, both ICOs and NFTs clearly qualify.

Second, the effort of a promoter central to the enterprise. In the Howey case, it was the farmer. Here, Dr. Yermack says the equivalent could be “Mayweather, or the media company and other promoters involved.”

Third, the expectation of profit. Are the buyers getting a product or service? Or are they motivated to make money instead?

Yermack explains that the intent of the buyers is more relevant than the essential nature of the items themselves. “Someone who buys a Yankees ticket probably isn’t buying it to flip it. It’s just that they’re a baseball fan, they want to go to the game, and they need a ticket. With these boxing highlights, you’re probably buying these not to watch the highlights, but to get a rate of return from flipping them in the market, like with NBA Top Shot.”

Molinari went on to say, “If you’re buying it to achieve a profit based on visibility, promotion, or other conditions outside of inflation for example, it could be viewed as a security.”

Finally, the concept of “common enterprise”, meaning a group of multiple investors.

Dr. Yermack suggests that this may be the biggest difference between the new offering and the ICOs that got Mayweather in trouble a few years ago.

“What actually makes NFTs valuable is their uniqueness. With ICOs, you sell them to many thousands of investors. But with NFTs, you have often built-in scarcity. If I’m Floyd Mayweather putting out NFTs of boxing highlights, having a very limited run and creating scarcity may be sufficient to avoid being covered by the statute.”

But what happens if the Mayweather offering mirrors the DAZN NFTs, with not just unique tokens, but also groups of 50-100 categorical tokens like DAZN’s recent “Bronze” and “Silver” releases? Would that qualify as a “common enterprise”?

“The issue you’re raising is not one that I’ve seen litigated or analyzed by the SEC or anyone else,” Dr. Yermack said. “I will only say that it’s a very interesting question, and I’m not sure how the relevant lawyers would think about answering it.”

Will Floyd Mayweather face new legal problems because of this NFT offering? Much of it comes down to legislation that dates back to 1933, and a 75-year-old Supreme Court case about oranges. Ultimately, it depends on if and how the SEC chooses to interpret the purpose and uniqueness of non-fungible tokens.

“The motivations of people in the collectibles market are a little murky.” Dr. Yermack says. “Some people see it as an asset class with a rate of return. But others just enjoy the actual process of collecting. Others do it for prestige. I think it’s enough of a gray area that regulators have kept their distance.

“But the SEC has been so aggressive in the area of the ICOs that I could see them potentially wanting to crack down on NFTs in a similar way. I don’t know that Floyd Mayweather wants to be the test case again for another category of digital assets. But it’s possible that could happen.”