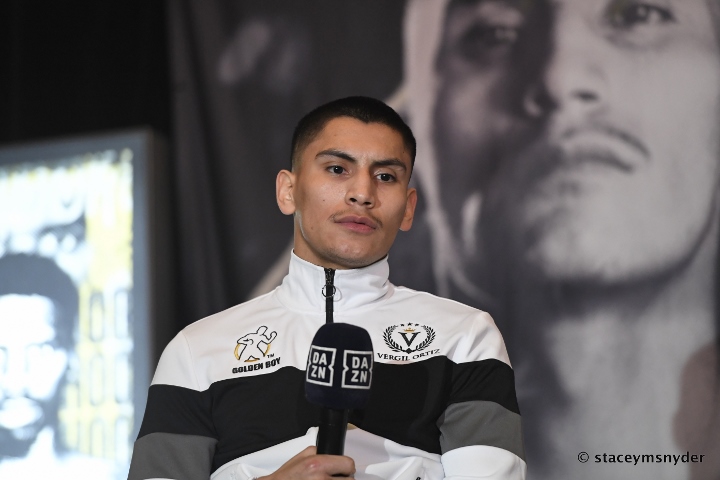 Vergil Ortiz Jr. is coming into his own as a welterweight contender and a box office draw.

The unbeaten knockout artist enjoyed the best of both worlds in his most recent contest, a 7th round stoppage of Maurice Hooker (27-2-3, 18KOs). Their March 20th all-Dallas shootout played to a sold-out crowd at Dickies Arena in Fort Worth, Texas. The event—which streamed live on DAZN—produced a live gate of $391.040 from 4,558 tickets sold according to the final tax invoice provided by Golden Boy Promotions to the Texas Department of Licensing and Regulation (TDLR), a copy of which has been obtained by BoxingScene.com.

Tickets were sold at four price points from $40 to $200 for the DAZN-televised show. Another 430 complimentary tickets were issued to the broadcasters, production team, media and personnel deemed essential to the promotion.

“Vergil Ortiz Jr. proved that he can draw a legitimate crowd in his hometown,” Eric Gomez, president of Golden Boy told BoxingScene.com.

The venue—which is mere miles from Ortiz’s hometown of Grand Prairie, Texas—normally holds 14,000 at full capacity. Social distancing measures limited the number of tickets made available to the public, with Golden Boy enjoying its second straight event in Texas to run through its entire inventory.

The previous occasion came less than three months prior, when Ryan Garcia knocked out England’s Luke Campbell in the 7th round of a DAZN-streamed main event at American Airlines Center in Dallas, Texas. That show produced a live gate of $353,835 from 4,218 tickets sold, with Golden Boy working with the venue to make more tickets available to the public after selling out its initial batch.

Ortiz (17-0, 17KOs) enjoyed his second hometown headliner in the win over Hooker. The previous occasion came in his true hometown of Grand Prairie, where he stopped Antonio Orozco in the 6th round of their Aug. 2019 clash. A larger crowd was on hand for that show, which wasn’t restricted by social distancing and COVID protocol.

“It was a little different (this time), only because of the venue,” Ortiz told BoxingScene.com. “It’s a smaller venue, not as spread out so it felt like they were right next to the ring.

“It was intense. I could really feel the love.”

In addition to enhancing his box office appeal, Ortiz further proved his worth in the talent-rich welterweight division. It came on a night when the division’s two best fighters, Errol Spence Jr. (27-0, 21KOs) and Terence Crawford (37-0, 29KOs) were both on hand to witness the event.

“He also showed that he’s a real player at 147 pounds,” insists Gomez. “That’s a real tough division, so if he makes it out on top, we will have a fighter who not only can sell tickets, but who also can be recognized as a top pound-for-pound fighter.

“I look forward to how the next few years will play out.”