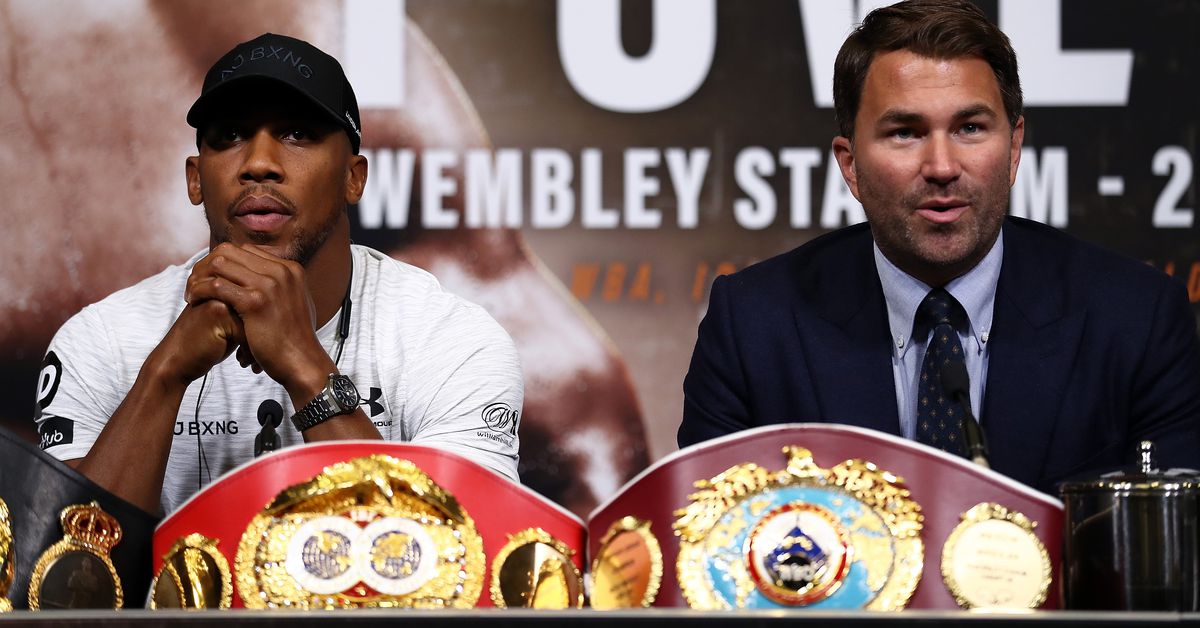 Matchroom promoter Eddie Hearn has clearly been floored by recent news of an arbitration judge ordering Tyson Fury to face Deontay Wilder next, especially after spending so much time and effort over the past few months to put together a deal for the undisputed heavyweight title with Anthony Joshua.

Not to be, it would appear. So while Fury is going to figure out exactly how he intends to make his next move, Hearn is being forced to look elsewhere for opponents for Joshua.

“It was a shock to the system. This negotiation’s been going on for three or four months now, and we were always assured this wouldn’t be a problem,” Hearn said in a video for Matchroom. “It was a very strange decision from the arbitrator, to say the least, but that’s their business, that’s their responsibility, and we have to see now where they go with it.”

As for his conversations with Top Rank’s Bob Arum, Fury’s co-promoter, Hearn said, “I think he was in complete and utter shock. I’ve never really heard him speechless, but he’s been very bullish throughout this whole process that this wouldn’t be a problem, this wouldn’t stand in the way of an Anthony Joshua-Tyson Fury fight, and that’s quite frustrating. He was almost shell-shocked, I think.”

Arum has said he won’t do step-aside money for Wilder, and it does look like Fury-Wilder 3 is probably going to happen.

As for other possible opponents for Joshua, Hearn won’t have to look very far as Oleksandr Usyk remains Anthony Joshua’s WBO mandatory challenger and has seized on this moment to reassert his position, looking for his title opportunity.

“The one that springs to mind immediately is the (WBO) mandatory of Oleksandr Usyk. They’ve been quite patient and I think, really, we’re in a situation now where if Team Fury don’t get their act together by the end of this week, we will have no option but to look for an alternative fight. AJ wants to fight this summer, Oleksandr Usyk is the mandatory, we have two or three other options, as well.”

For now Hearn says that he has to remain agile in this situation to see how things may work themselves out, otherwise make plans accordingly. And as far as Hearn and Joshua are concerned, fighting for the undisputed heavyweight title is still the priority, but this particular situation with is out of their hands.