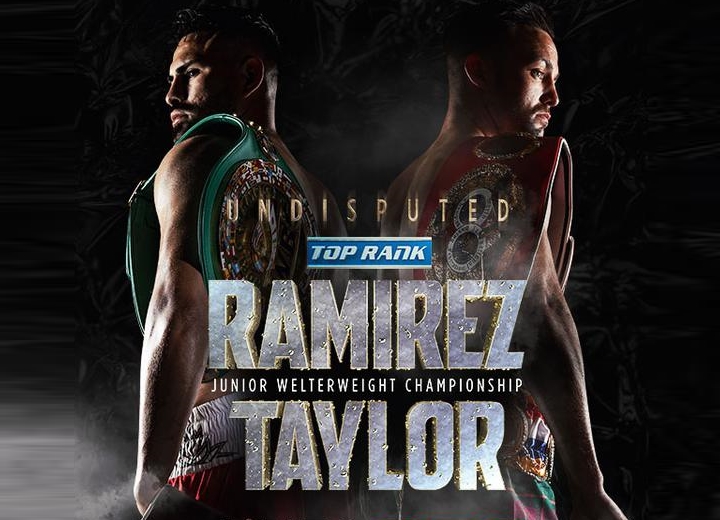 The biggest news in boxing this week, centering on contract battles at heavyweight, is ultimately about what isn’t happening and what might happen next.

What’s happening for sure, in the now, could be that good.

The best reason to watch and follow boxing is to see compelling, hopefully violent clashes played out three minutes at a time. There’s nothing better. Heavyweight will inevitably get to that later this year and will be much more interesting when it does.

This weekend, the best available match in what has been one of the more reliable weight classes of the last sixty years will unfold within those parameters.

30-year old Josh Taylor (17-0, 13 KO) has a pair of alphabet belts and a win over Regis Prograis to cap a victorious run through the World Boxing Super Series. 28-year old Jose Ramirez (26-0, 17 KO) was methodically developed after the 2012 Olympics and has his own pair of belts, a unification victory over Maurice Hooker still his crowning achievement.

This might not be Pryor-Arguello or Chavez-Taylor on paper, but it’s a worthy extension of the legacy of the Jr. welterweight division. It’s at least the most fascinating elite clash at 140 pounds since Danny Garcia-Lucas Matthysse and when it’s over we will have the second fighter to unify four belts in the class, after Terence Crawford did it a few years ago.

The best thing about what’s coming this weekend? It’s an actual fight.

How will Taylor handle the physicality of Ramirez? Is Ramirez rounded enough to tackle the more rounded game of Taylor? Whose chin and will is sturdier if the fight boils down to the intangibles?

Those are questions we can all ask with genuine anticipation because sometime Saturday evening on ESPN (8 PM EST), some answers will start to gather.

The build for this fight has been criticized, including by the management of Ramirez, but serious fight fans have had this weekend circled since it was announced. The worldwide leader will turn up the volume, with preview programming throughout the week in the lead toward the fight, including a prime time lineup devoted to the fight on Thursday and Friday’s weigh-in broadcast.

At the closing stretch, Taylor-Ramirez will get its shine as a sporting event. That should almost always trump a sport’s event.

While it’s fine to be disappointed about big fights falling through, this week is a good reminder that breathless discussion of what might be and then what probably won’t be is always a poor substitute for what is.

Taylor-Ramirez is the latest in what has been a strong slate of fights in 2021, including an outstanding card on Showtime last week headlined by Brandon Figueroa winning the WBC belt at Jr. featherweight versus Luis Nery. There is no real end in sight.

Before this fight even begins this weekend, the build has already commenced for another four-belt showdown at Jr. middleweight (Jermell Charlo-Brian Castano) and Saul Alvarez-Caleb Plant feels probable at super middleweight. Those are just the four-belt fights.

We also have other unification clashes, compelling rubber matches, and fresh clashes all around the scale locked into the schedule. It’s a little comical that while exhibitions and sideshows are decried as signs of boxing’s ill health, the in-ring product is as good as it’s been in years.  In almost every major main event signed so far through September, barring an injury postponement or some other bad bit of luck, fight fans will have outstanding actual fights to anticipate.

Those are yet to come.

This weekend, we have Taylor-Ramirez.

There’s nothing to complain about except that we aren’t at the opening bell yet.

A contract is a contract and Deontay Wilder isn’t preventing anything. Tyson’s Fury’s signature is. If Fury and Anthony Joshua win their next fights, there’s no reason they can’t turn back to each other next. No matter when it happens, Fury-Joshua is going to be a monster under any circumstance…If Joshua-Oleksandr Usyk is the other side of the coin from Wilder-Fury III, that’s a pretty good outcome for fight fans…Superman and Lois is back and fans of the fountainhead of superheroes should be happy about it. It might be the best live action version of Superman since Christopher Reeve…The card for Tank Davis-Mario Barrios is pretty solid…Paul Mooney had genius and genius lost is ever a human sorrow…Kazuto Ioka is cleared and Jr. bantamweight keeps one of the pieces that makes it vibrant…Jake Paul to Showtime? There’s going to be a lot of ‘well, Butterbean once had prime real estate on the Trinidad-De La Hoya card’ type of conversations to have with the new generation…Is Lebron-Curry the Magic-Bird of this era?