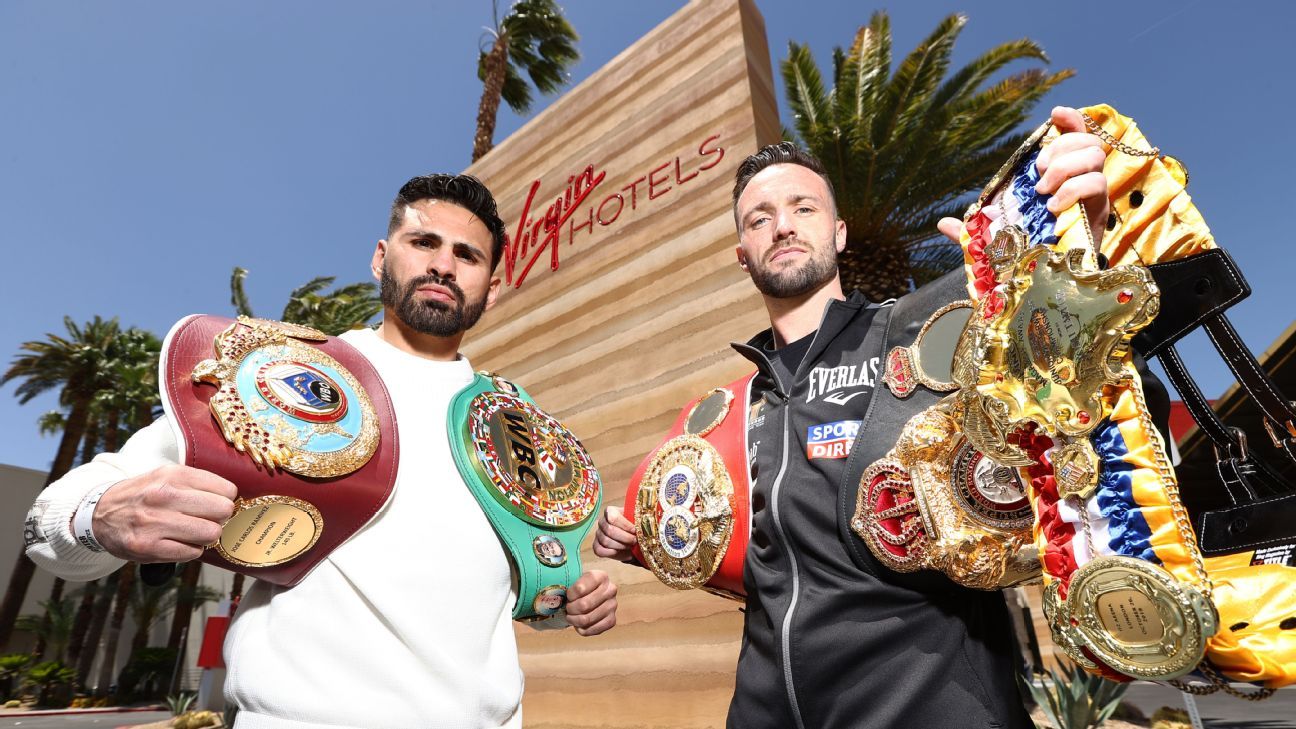 A couple of weeks ago, a once-great champion and a YouTuber held a news conference to announce their “fight” in Miami.

The YouTuber’s brother, also a YouTuber, confronted the retired fighter and snatched his baseball cap.

“Gotcha hat!” he said, before running away.

This was widely interpreted as the work of a master provocateur.

Then the retired fighter took off after the brother of the YouTuber.

This sent hordes of videographers scurrying, and the moment was likewise interpreted as the inauguration of a death feud.

Meanwhile, Jose Ramirez and Josh Taylor — each of them an undefeated former Olympian, each in possession of two championship belts — meet this Saturday to decide who is the sport’s undisputed 140-pound champion, but had no news conference to announce their bout. You can chalk that up to COVID, I guess. But one of these men, at the very height of their powers, stands to become only the sixth four-belt champion in boxing history. And still, if you’re like most American sports fans, you have no idea who these noble warriors are.

And that’s a damn shame.

I hear this all the time: I was a big fan, but it’s not like it used to be.

Well, I’m not sure there actually were good old days in boxing. But I do know Ramirez-Taylor is how it ought to be. I’m not shilling for the promotion here. But I am shilling for the fighters. In a world that confuses the publicity stunt with a story well-told, Ramirez and Taylor have a wonderfully apparent antiquated notion of merit. What they’re doing, and what they’re risking, deserves some recognition.

“This fight represents not just business, not just entertainment, but it represents glory,” Ramirez says. “It represents everything we’ve gone through since we were kids.”

“After this fight, when I win, I could happily retire tomorrow and say ‘Thank you very much,'” Taylor says. “I’d be able to live the rest of my life so proud of what I’ve done.”

Ramirez — who has long been outspoken on immigration and agricultural issues — represents farm workers in California’s Central Valley. Taylor seeks to become Scotland’s first undisputed champion since the great Ken Buchanan, whom he met as a teenager at the Lochend Boxing Club in Edinburgh. “I was just an amateur,” Taylor recalls. “He must’ve watched me spar and … he was saying, ‘Oh, you’ve got the moves, son. … You can be a world champion one day, son. I hope you prove me right.’

“To come back with all four belts and be just like him almost 15 years later, that’s just unbelievable. I’d love to do that.”

If they’re each after glory, they’re diametric opposites in terms of temperament. Taylor was a slight if churlish boy, a target for bullies as he recalls: “I always found myself in scraps. It’s probably part of the reasons why I’m a world champion today. … I may have been getting beat up by a couple of bigger guys, but I would just keep going back and back until I won, until they didn’t want to fight.

“I’ve just always had that determination and little bit of wickedness about, a little terror inside me that I don’t think I can switch off and will never leave me, even after I finish boxing.”

Ramirez is more of a stoic, consumed with a sense of duty and virtue: “I didn’t grow up on the streets. … What makes me tough is the appreciation that I have for all the good things my family gave me. All that love, all the respect that they gave me.”

At 14, he started picking peppers, as his parents had before him. Those hot, dusty days informed not only Ramirez’s sensibilities and identity, but his tenure as a champion too.

“He’s very skillful. He’s still very talented. He’s got great power,” says Robert Garcia, a former trainer of the year, who, like his fighter, grew up the son of fieldworkers. “But I truly believe that’s what made him the champion he is now, growing up and picking peppers and working the fields.”

Not that it will help him, according to Taylor. Ramirez “overwhelms his opponents, gets up close, gets on their chest and, and works the body and head well. Stylistically, I’m all wrong for him. I can box in the center of the ring. I can box on the back foot. I can stand up close and fight and tough it out when I have to as well. I believe I’m just as hard of a puncher as him.”

Says Taylor’s trainer, Ben Davison: “Everybody knows what type of fighter Ramirez is. It’s our job to turn his strengths into his weaknesses and use them against him. The more aggressive he is, the more vulnerable he will be.”

“I do my talking with my fists,” responds Ramirez, acknowledging that he’s less than glib. “Josh Taylor only has 17 fights … he’s never been really tested … I will not let him be working more than I am. I’m gonna be too much for Josh Taylor. He’s never faced a Mexican fighter like myself. He’s never faced a fighter who fights for so much more than just winning that simple fight.

“I fight for my people,” Taylor says. “My people of Scotland.”

For all the talk of their differences, it’s Garcia who sees them as kindred spirits. Taylor, he says, “comes from a country that wants to see wars [in the ring] — just like Mexicans. Mexicans want to see people get cut, get dropped, get up and then still win fights you know? I think he comes from the same kind of blood, so that’s what’s going to make a great fighter. Honestly, I think we could end up with a trilogy with these two guys.”

Imagine that: a trilogy. Like the good old days. Perhaps, you’ll even remember their names. Maybe one day you’ll find yourself telling your kids: The fighters today couldn’t touch guys like Ramirez and Taylor.

And no one had to steal anyone’s baseball cap.