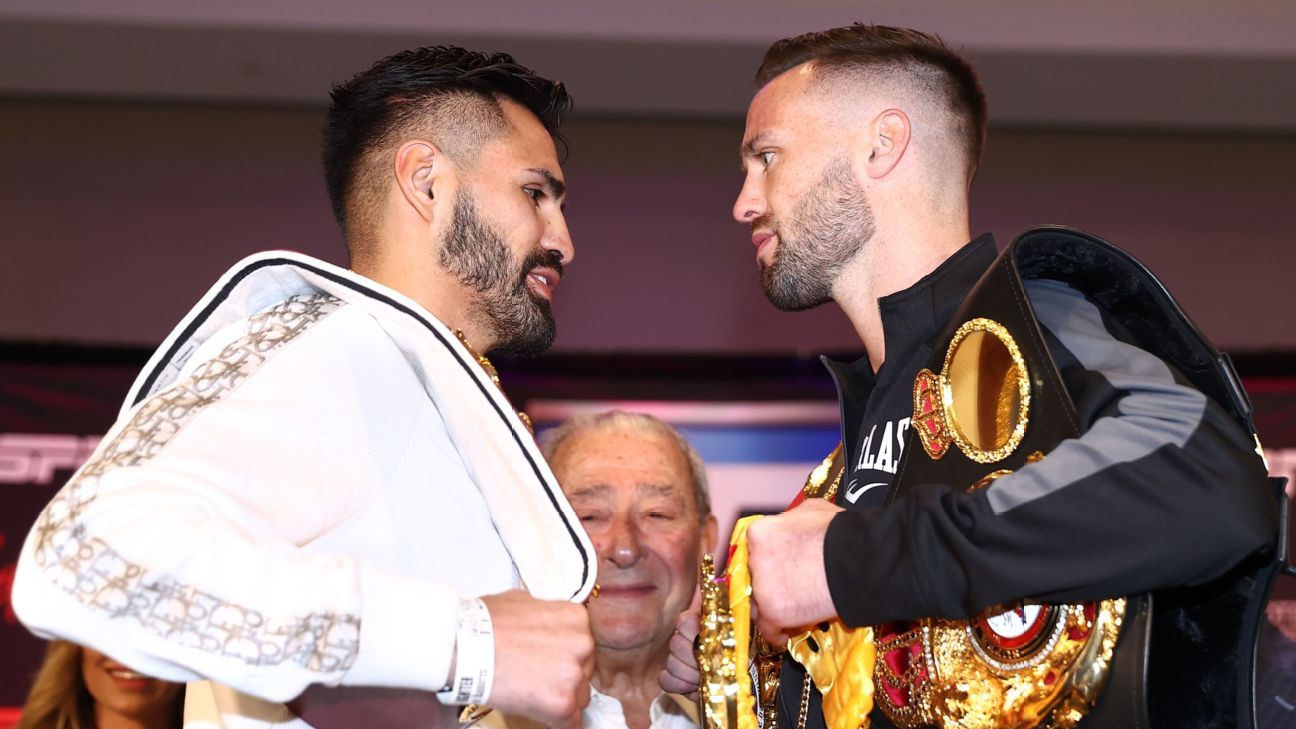 LAS VEGAS — Not all championships are created equally.

Even in boxing, with the most legitimate belts swimming in an ocean of trinket titles, this is true. A fighter can sometimes stumble into becoming a champion if the matchmaking is good enough or the circumstances are favorable.

That’s not the case with Jose Ramirez and Josh Taylor. Each is a growing rarity in the sport — two fighters with undefeated records, with victories over quality opponents, who will put it all on the line in what should be one of the best fights of 2021.

The winner of the bout at the Virgin Hotels in Las Vegas (ESPN and ESPN+, 8 p.m. ET, with prelims starting at 4:45 p.m. ET) will be crowned the undisputed junior welterweight champion of the world, and hold all four major belts in the division. But perhaps more importantly, the quality of that undisputed status is something that is rarely attained.

Over the past couple of years, Ramirez and Taylor have plowed through the division to win titles. With each victory they eradicated doubt about their status among the world’s best 140-pounders.

Ramirez (26-0, 17 KOs) started his title run in 2018 when the Mexican American out of Avenal, California, battered Amir Imam to win the WBC title. He became a unified champion in 2019 when he stopped Maurice Hooker in Hooker’s home turf of north Texas to win the WBO belt.

Taylor (17-0, 13 KOs) earned his titles through the World Boxing Super Series, a tournament that has turned out compelling fighters such as bantamweight champion Naoya Inoue and Oleksandr Usyk, the former undisputed cruiserweight champion now making noise as a heavyweight.

Taylor, a 30-year-old Scotland native, beat Ivan Baranchyk to win the IBF title in May 2019 before beating Regis Prograis to claim the WBA strap as well and the WBSS trophy.

In a common theme between both Ramirez and Taylor, their title bouts weren’t one-sided affairs against glorified opponents. Taylor-Prograis was considered by many to be one of the best fights of 2019 and was a majority decision victory, much like Ramirez’s defense in 2020 over the tough Viktor Postol.

Taylor is the No. 1 fighter in ESPN’s divisional rankings and a betting favorite over Ramirez, who is ranked No. 2. Taylor is known for a tight, speedy attack, while Ramirez has a knack for relentlessness and carries good power. The fact this fight is even happening is noteworthy in an era when boxing’s best fighters find excuses for not fighting each other.

Whoever wins deserves all the glory that comes with a victory of this caliber. Many fighters are champions, but few will ever do what Ramirez or Taylor will accomplish on Saturday night.

Ramirez and Taylor reflect on their paths to undisputed title fight

Ramirez and Taylor have worked for decades to reach this moment. Both fighters are 2012 Olympians who turned their failure to win gold into professional careers in which they now own gold of a different kind, in the form of two belts apiece wrapped around their waists.

A prophecy by an all-time great

Taylor was a teenager in the Lochend Boxing club in Edinburgh. He was training, just another amateur hopeful in Scotland trying to become something more in life through boxing.

Taylor had talent — there was little question about that. Then came a conversation, one that sparked a friendship and inspired a goal to become a unified world champion.

Ken Buchanan, likely the greatest Scottish boxer ever at the time, stepped into Taylor’s gym that day.

Buchanan would come back often and tell Taylor his stories of fighting overseas and sharing a room with Muhammad Ali, offering all the advice he could. Taylor believed in himself. However, he needed a little convincing when it came to the legend’s prediction for his career.

On Saturday night, Taylor’s going to attempt to accomplish that goal of becoming an undisputed boxing world champion — something not done by a Scot since Buchanan at lightweight (unifying the WBA, WBC and the lineal championships). If he beats Ramirez in their junior welterweight unification bout, Taylor will become Scotland’s first unified champion in the four-belt era.

Taylor fought a long time, and came a long way to get to Saturday’s fight in Las Vegas. He won a silver medal at the Commonwealth Games in 2010, and then gold four years later. He qualified for the London 2012 Olympics, and represented Great Britain in front of the eyes of the world.

The competition and encouragement gave Taylor a belief in himself. He hit the ground running in his pro career, rattling off 15 wins in less than four years and winning a world title in that 15th fight. Buchanan and Taylor got together after Taylor beat Regis Prograis in October 2019, adding the WBA title to his IBF junior welterweight belt.

“We had a cup of tea and a bite to eat and he says, ‘Told ya, son. Told ya you were going to be world champion and you proved me right. Well done, son. I’m proud of you,'” Taylor said. “He gave me a scarf, his Buchanan Tartan, his family Tartan scarf, so I’ve got that wrapped around my trophy at home and my belts and stuff like that.”

If Taylor is successful in beating Ramirez on Saturday, he said he’s going to take all four belts — and the Tartan scarf — to visit Buchanan.

Even at 30 years old, Taylor is already a cornerstone in Scottish boxing. Yes, there’s Buchanan. Yes, there have been other Scottish fighters reaching modicums of success. But Taylor is the biggest name in the sport from that country in over a generation.

And since Scottish fans are unlikely to make it to the United States for the fight — COVID-19 protocols continue to limit travel — Craig McEvoy, the Scottish boxing national team coach, said he’s trying to set up giant watch parties to cheer Taylor on from an ocean away.

McEvoy said a win by Taylor on Saturday would be on par with Andy Murray winning Wimbledon in 2013 and football team Celtic winning the European Cup in 1967. It’d be such a big deal that McEvoy described a potential Taylor win as “Scotland’s biggest sporting moment.”

Win or lose, Taylor will have a mural up in the national team’s new performance center as a lasting image of his impact on the sport in Scotland. There will be a ribbon-cutting ceremony and a replica of it will be in every boxing club in Scotland, McEvoy said.

As the next generation of potential stars tries to chase Taylor’s footsteps, as Taylor chased Buchanan’s, Saturday’s fight in and of itself is both proof of everything Taylor has worked for and a moment to celebrate what it’ll mean to everyone who’s been a part of his story along the way.

“It is just about a fairytale to be honest with ya, from a program point of view,” said McEvoy. — Michael Rothstein

And the winner is …

Who has the advantage? Will Ramirez’s relentless attack be the key to victory, or can Taylor’s boxing abilities be enough to frustrate Ramirez and claim the win? We asked a panel of boxing experts for their take on the fight, as well as their predictions.

For a deep dive into how Ramirez and Taylor match up in the ring, as well as the key factors that could determine the fight’s outcome and a prediction of his own, check out Timothy Bradley Jr.’s fight breakdown.