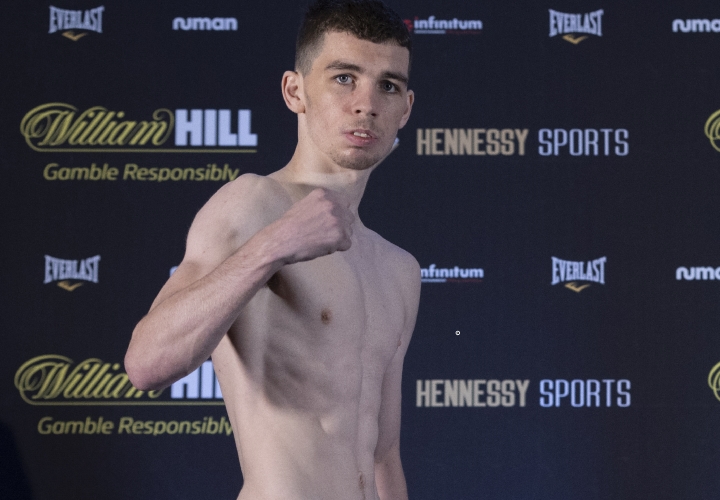 So far, so good for Stevie McKenna, who brings a record of seven knockouts in seven fights into his latest contest this weekend. But while McKenna hasn’t been getting many rounds in the ring, his father and trainer, Fergal, is making sure he is not shy of work in the gym.

The McKennas, Stevie and brother Aaron, have a real ‘have gloves will travel’ attitude to sparring. While Stevie looks to be facing a straightforward task for his first fight of 2021 on Saturday, his quest for sparring has taken him from his home in County Monaghan, Ireland, to Dublin, to Tijuana to Las Vegas.

Stevie goes for win number eight as a pro when he faces Damian Haus, from Poland, who has a 3-5 record, at the Skydome in Coventry. It is a low-key start to what McKenna hopes will be a big year.

“I’m looking forward to bringing another exciting, explosive performance,” he said. “I’ve had a great training camp, I have been all over the world.”

“Our training camp starts straight after Christmas and it runs through to the next Christmas,” Fergal said. “We don’t train for 8-12 weeks, we train all year round.

“We had this mentality down the years, even when the boys were amateurs. We used to go to any club, anywhere in Ireland or the UK, and we could walk in the door and spar with anyone. It has been the same since turning professional.

“So, we have the attitude of if there is someone in the gym at the same weight as the boys or within reason, we will even give away a few pounds. We have no problem sparring world champions or any hot prospect.

“When we went to Mexico, it was the same mentality. Once we heard Jaime Munguia was in town, we touched base and said we were looking for sparring. We went to the gym and Arron spent a week and a half sparring him.”

Mexico had never been the intended destination, but the pandemic meant getting from Ireland to the United States was difficult.

“Aaron got the chance to spar in America and to get there we had to go via Mexico,” Fergal said. “We had to quarantine for two weeks before we could get into the US, so we phoned around and Aaron got a lot of rounds with Jaime Munguia and Stephen got a lot of quality work with some really tough Mexican fighters.

“We spent 16 days in Mexico before we got into the US. Then we got a message from Josh Taylor that he was looking for sparring ahead of his fight with Jose Ramirez and we ended up going down to Vegas for two weeks and Stephen was one of the chief sparring partners.

“Then we finished the camp off in England. This is preparation for them stepping up throughout their careers.”

For Stevie, sharing the ring with a world champion like Taylor is nothing new.

“I have a similar style to Jose Ramirez and I have done a lot of work with Jose, so it was good for him and good for me,” Stevie said. “I can only learn from sparring like that.

“Every day we go into the gym we are learning something new and the sparring we both get is top quality. Even the sparring with each other. We don’t hold back. We will do anything to be world champions and go down as Ireland’s greatest fighters.”

Dillian Whyte Gets Past A Determined Jermain Franklin
The Beltline: Is boxing the easiest sport in the world?
Ryder eyes Alvarez after win via injury stoppage
Adam Azim destroys Rylan Charlton in breathtaking fashion
4,000 punches and counting: How we got to Chocolatito-Estrada 3