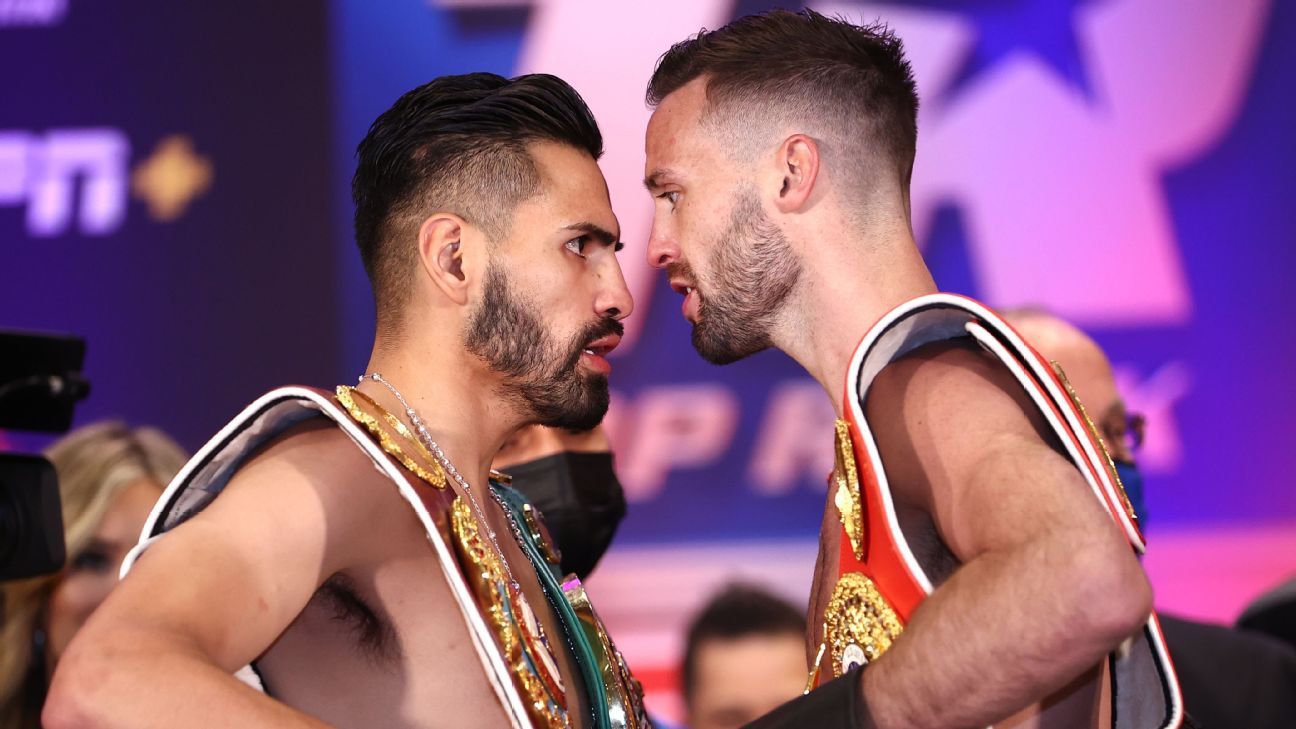 Jose Ramirez, the WBC and WBO junior welterweight titlist, and Josh Taylor, the WBA and IBF titleholder, will meet on Saturday to crown the undisputed champion in the division.

Ramirez (26-0, 17 KOs), 28, of Avenal, California, last fought in August when he defended his titles with a majority decision victory against Viktor Postol — a fight that was postponed twice due to the coronavirus pandemic. And while he’s a slight underdog against Taylor, Ramirez believes this is the right time for the fight, and a big opportunity to show he’s the best fighter in the division.

“In my mind, I’m supposed to win this fight,” Ramirez said. “I don’t let the outside noise get to me. No matter what you do, or who you beat, there’s always going to be somebody else out there. At this moment, that person is Josh Taylor.

“We both wanted the fight, and I respect him for taking on the challenge. Josh and I are out to make history, and I know I will be the better man on [Saturday].”

Taylor (17-0, 13 KOs), 30, of Edinburgh, Scotland, won the World Boxing Super Series junior welterweight tournament by defeating Ryan Martin, Ivan Baranchyk and Regis Prograis and took home the Muhammad Ali Trophy. With a win against Ramirez, he can become the first four-belt undisputed champion from Scotland in the country’s history.

“Undisputed world title fights in Las Vegas are rare, special,” Taylor told ESPN’s Nick Parkinson. “I’m really lucky and privileged to be in this position, to land a fight of this magnitude. But I have worked my backside off to get to this position, I didn’t get here by luck, and I will do my hardest to make sure I make the most of the opportunity.”

Richardson Hitchins Believes He Should Be Headlining His Own Shows
‘YOU WEREN’T MEANT TO COME!’ Michael Conlan MOCKS ‘BEST TRAINER IN WORLD’ Ben Davison
BENAVIDEZ vs PLANT Kickoff Press Conference | #BenavidezPlant
Beterbiev Stops Yarde In Eight
George Warren reacts to an incredible Fight of the Year between Artur Beterbiev and Anthony Yarde 🥊