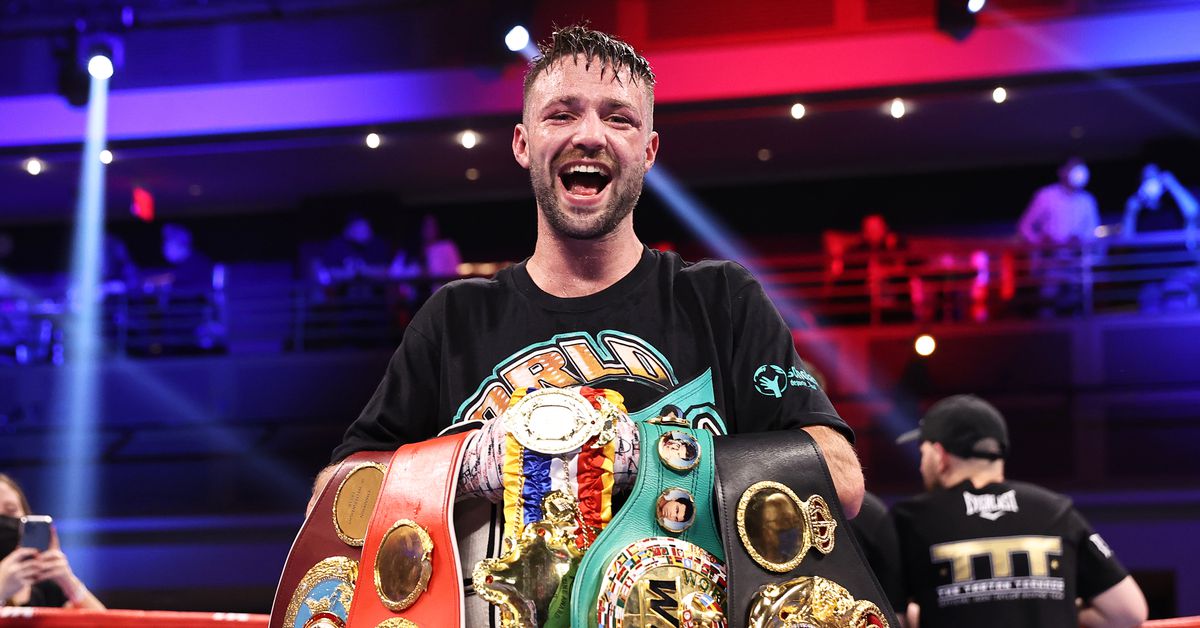 Josh Taylor is now one of five or six men — depending on your interpretation of the Teofimo Lopez situation — to become undisputed champion of a division in the four-belt era, beating Jose Ramirez by decision on Saturday night to become the one true king at 140 lbs.

Even with small sample size, undisputed reigns in the four-belt (WBC, WBA, IBF, WBO) era are not just uncommon, but they’re almost never long-lasting, either because fighters have done all they are going to do in that division, or sanctioning body politics get in the way sooner than later.

Look at the reigns:

Still, none of this is meant to degrade Taylor’s achievement, and in all reality, that’s how boxing fans should always look at someone going after an undisputed claim in modern times: Achievement. Because of the several ridiculous ways the sport operates, there’s not much can be done about what comes after someone unifies all four belts, but the doing it is still impressive and worthy of note.

Taylor has choices, of course. He may not be some huge money superstar, but he’s a legitimate top fighter in the sport and has earned his recognition. Let’s look at the two key options and what goes around them.

Let’s say Taylor stays at 140 for the time being. There is then another quick set of two options:

There is an immediate, looming mandatory that has to be dealt with: Jack Catterall, who has been sitting on a WBO mandatory for some time now — he was named mandatory back when Maurice Hooker still held the belt, and Hooker lost it to Ramirez in 2019. He would have been forced in against Ramirez last year (or Ramirez would have had to vacate), but Ramirez also had a WBC mandatory (Viktor Postol) who took precedence, and then everyone agreed to allow Ramirez-Taylor to happen.

But the 27-year-old Catterall (26-0, 13 KO) will be getting the order for a fight with Taylor now. If Taylor vacates all four belts, Catterall will fight someone else for that vacant title. If Taylor just vacates the one belt, his undisputed claim ends anyway.

There is some appeal in Taylor-Catterall. While Catterall would not be seen as a truly dangerous threat to Taylor, it could be a chance for Taylor to take a “victory lap” sort of fight at home in Scotland against an English opponent. If the UK can get crowds into venues this summer or fall, they could do a great homecoming style show for Taylor in Glasgow or Edinburgh.

But if Taylor is looking for another actually big fight immediately, Catterall probably doesn’t scratch that itch.

Otherwise for current 140 fighters, the top options would be rematches with Ramirez or Regis Prograis, whom Taylor beat in 2019 to win the World Boxing Super Series. Both were really good fights, but I don’t know that there’s any overwhelming demand to see either of them again, and neither Ramirez nor Prograis are exactly big stars who truly move the needle. Taylor may see both of them as “been there, done that” territory, at least for the time being.

The most intriguing potential option at 140 would be lightweight top dog Teofimo Lopez moving up in weight.

We’ll have to see how the situation between Lopez (16-0, 12 KO) and Top Rank plays out — it got icy a while back when Triller over-bid for Lopez’s fight with Kambosos and won the rights to that event, but that could thaw depending on how Lopez is feeling about Triller handling his fight. Publicly, it’s all roses, but it’s not been the smoothest deal.

Triller got run off of their original June 5 date when Floyd Mayweather and Logan Paul took June 6, sort of a bully move, and have thrown themselves into a ridiculously crowded night on June 19, where not only will their PPV compete against another actual PPV (the Chavez-Silva thing) but shows on ESPN, Showtime, and maybe DAZN, depending on the start time for DAZN’s Munguia-Sulecki card. The Lopez-Kambosos show might tank horribly, and Top Rank’s standard operating procedure might start to look a little better.

Teofimo is still signed to Top Rank, and of course Top Rank co-promote Taylor. In theory, it’s not really a hard fight to make if Lopez beats Kambosos and both he and Taylor wanted to do it. And there’s a lot of intrigue there.

The other big, obvious option is for Taylor to scatter all four 140 belts to the wind and make his way to 147 for a big fight, big payday, and big legacy chance against WBO welterweight titleholder Terence “Bud” Crawford.

This could be truly appealing to both sides and to Top Rank. Promoter Bob Arum has already sort of floated it out there, as he should, because it’s an obvious idea.

Not only is it a chance for Taylor to immediately jump to one of boxing’s “glory” divisions against one of the sport’s bigger names and most-decorated active fighters, but it gives Crawford something he desperately needs: A fight anyone actually wants to see.

Crawford (37-0, 28 KO) has won titles at 135, 140, and 147. But while he’s had good wins, he’s never had that truly standout, “that was the one” sort of matchup. His reign at 147 is being increasingly criticized every fight that goes by. He beat Jeff Horn for the WBO belt in 2018, and that was taking a title from a guy a majority of fans felt didn’t deserve to have it in the first place.

Since then, he’s defended against Jose Benavidez Jr, a former blue prospect whose career had stalled pretty hard, and now hasn’t fought since losing to Crawford in 2018; Amir Khan, whose best days were clearly behind him; Egidijus “Mean Machine” Kavaliauskas, a generally well-liked fighter who isn’t seen as a truly serious contender; and Kell Brook, who was kind of a repeat of the Khan situation.

Crawford and Errol Spence Jr are simply not going to fight each other no matter how much fans want it. Neither of them have expressed any legitimate interest, in all reality. In fact, it’s easier to say they’ve both expressed disinterest. If they wanted that fight to happen, it could. Neither of them seem to care, Crawford especially, and Spence is now fighting Manny Pacquiao in August, which not only gives Spence a big fight (Pacquiao is still clearly the biggest star in the division, even at 42), but takes away the one big option Crawford seemed to have.

Talks of Crawford fighting Shawn Porter or someone else from the PBC side should probably be disregarded. The Porter thing has been an “it could happen” twice now and hasn’t been signed or even seriously discussed, it seems. It’s certainly a good option, but Porter does not have the career momentum Taylor does now, and the Taylor fight is simply many times easier to actually get done since both are with Top Rank.

If Taylor wants to go right for that glory and Crawford sees it as a good option, it’s very doable. For Top Rank, not only do they put on a very good fight — one they’d probably try to sell on PPV, however foolish that might be — but they can at least then say they got Crawford a really good fight before his contract is supposed to end later this year.

There are, of course, other things Taylor could do. He could flat-out do none of this. Boxing is a brutally imperfect sporting system. Taylor could, for instance, choose to vacate at least the WBO belt at junior welterweight and move up to welterweight, but not against Crawford. He could fight, say, the aforementioned Kavaliauskas as sort of a toe-dip into that division.

That idea might not even require that he vacates any of his other 140 belts for the time being, depending on how lenient the sanctioning bodies want to be. The IBF do not have a mandatory challenger. The WBC have one (Jose Zepeda), but Catterall and the WBO would take priority this time around. The WBA doesn’t deserve to be figured out, but technically there is no mandatory challenger for Taylor there, either.

This would obviously be the least popular option, and at 30 it’s not like Taylor is some youngster trying to figure out his place in the sport or anything — he may only have 18 pro fights but he’s a boxing veteran, and obviously a top-shelf fighter.

The most popular hope probably figures to be Crawford, but I don’t think anyone would shake a stick at Taylor fighting Teofimo at 140, either. Catterall would be, on some level, an understandable idea for Taylor to get a big reception as a conquering hero at home in Scotland.

We’ll have to see how it shakes out. And while it’s very possible and may seem a bit of a shame that 140 is about to be totally splintered just as quickly as it was fully unified, as long as Taylor does something people want to see, it shouldn’t be a problem for much of anybody.

Emmanuel Navarrete Looking To Get Past Liam Wilson
Vargas vs Foster OFFICIAL WEIGH-IN | #VargasFoster
Editor’s Letter: Yarde’s performance against Beterbiev demonstrated not only his quality but the importance of experience
Savant Sundays: Ingemar Johansson
The Beltline: Tunde Ajayi, a white towel, and one of the finest corner stoppages in recent memory