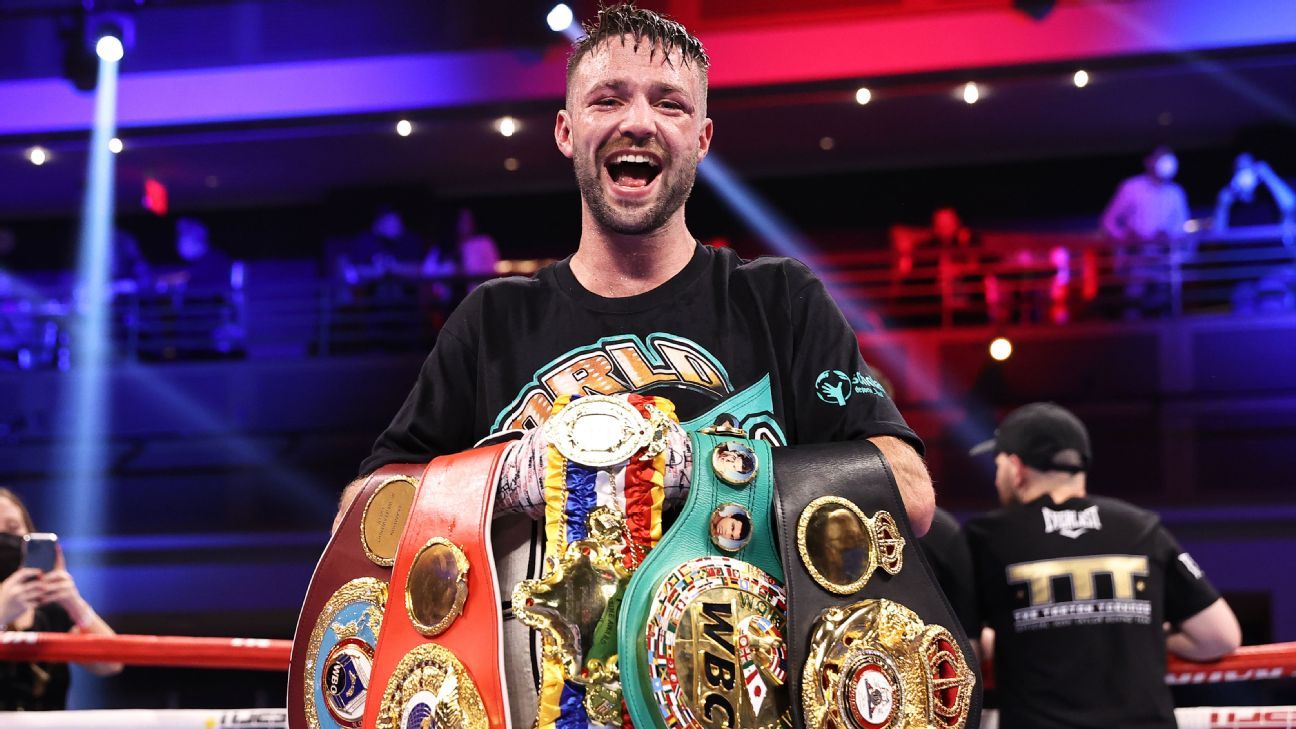 In a week in which one four-belt world title fight hit the canvas amid an interminable negotiating period, Josh Taylor vs. Jose Ramirez played out in thrilling fashion to produce that rare and sacred thing in boxing: an undisputed world champion.

When Taylor was announced as the undisputed junior welterweight world champion, it was a moment to savor. The fact that it was a breathtaking, back-and-forth encounter made it even more special as Taylor, who floored Ramirez in the sixth and seventh rounds, won by scores of 114-112 on all three judges’ scorecards.

It was just what boxing needed to improve its credibility after the disappointment and frustration resulting from the collapse earlier this week in confirming Tyson Fury vs. Anthony Joshua for all four world heavyweight titles.

Taylor wrote his name into the history books by becoming the first British boxer to win all four major world titles, in a high-quality clash that swung both ways at the Virgin Hotels in Las Vegas.

The sixth round was a belter and ultimately swung the fight, as Taylor sent Ramirez sprawling face-first into a corner when the Scot slipped a shot and landed a blistering left to Ramirez’s chin. Taylor (18-0, 13 KOs), 30, from Edinburgh, Scotland, who entered the ring as the WBA and IBF champion, made more progress in the seventh when he uncorked a stunning left uppercut to send Ramirez down for a second referee’s count.

Ramirez (26-1, 17 KOs), 28, from Avenal, California, who was the WBC and WBO champion, then came roaring back in the eighth, and finished strong by working his way back from the brink and grabbing rounds late in the fight.

At a time when YouTubers, novice boxers and retired legends in their fifties have become the major stories of the last year or so in boxing, at least from a mainstream perspective, occasions like Taylor-Ramirez are just the pick-me-up the sport needed. Two of boxing’s best operators, undefeated and competing for the highest stakes, and then living up to the pre-fight hype. Boxing needs more fights like this. — Nick Parkinson

What this victory means for Taylor

Taylor’s triumph is one the best performances by a British boxer ever on American soil, and will set up bigger, money-spinning fights for him. Taylor does not enjoy the same fame or wealth as the biggest boxing stars from the United Kingdom — the two rival heavyweight world champions, Fury and Joshua — but there should be no argument that by becoming undisputed champion, Taylor is also the U.K.’s best pound-for-pound boxer, ahead of Fury and Joshua. Fury was ringside, cheering on Taylor with a front-row seat to enjoy his accuracy and aggression.

This was only the seventh four-belt world title fight since 1988, and Taylor becomes the fifth man to hold four belts, following the achievements of Ukrainian Oleksandr Usyk [cruiserweight, 2018] and Americans Terence Crawford [junior welterweight, 2017], Jermain Taylor [middleweight, 2005] and Bernard Hopkins [middleweight, 2004-5] who all unified four versions of the world title in the ring. Some would also consider Teofimo Lopez falling into this category with his lightweight title unification win over Vasiliy Lomachenko last October, although the semantics of the “franchise” label from the WBC complicate matters.

Taylor also became Scotland’s first undisputed world champion since Ken Buchanan achieved the feat at lightweight in 1971, and the first Briton ever to hold all four world titles. Buchanan, 75, is reportedly living in a carehome currently, and Taylor told ESPN before the Ramirez fight that should he win he would seek to visit Buchanan and show him the belts.

Taylor might remain the only Briton to achieve the feat for a while yet, with the closest contenders setting their attention elsewhere; Fury is now set to fight Deontay Wilder a third time, while Joshua is seemingly on course to fight Usyk. — Parkinson

Jose Ramirez and Josh Taylor have to be separated in the hallway after coming face-to-face near the elevator.

Everything went according to plan for Taylor

There was a nice moment of sportsmanship in the post-fight news conference with Ramirez, which showed how good Taylor’s game plan was. Ramirez was asked about being smothered in clinches when he got too close to Taylor, and he looked past the small group of reporters and acknowledged Ben Davison, Taylor’s trainer.

All week, Davison and Taylor wanted to use Ramirez’s aggression against him and get inside his head. Taylor poked him with words and even sparked a mini-scuffle after Friday’s weigh-in. In the ring, Taylor looked for any advantage between punches to tweak Ramirez and it worked. Ramirez even admitted to being “too nice” at times, especially when he didn’t protect himself coming out of clinch in the seventh round, which led to the knockdown.

Taylor did a beautiful job of balancing distance and aggression and knowing when to push the limits, throughout fight week and in particular on fight night. It was an all-around masterful approach, and the results speak for themselves. — Ben Baby

What next for Taylor?

After unifying all four belts, if Taylor intends to hold onto all four belts for the foreseeable future, he must first deal with a mandatory defense against the WBO No. 1 contender Jack Catterall, of England, before he can contemplate a rematch with Ramirez, which will be in demand after the pair served up such a brilliant bout.

Catterall agreed to a step-aside deal for Taylor vs. Ramirez to happen, and a defense of the undisputed championship vs. Catterall back home in Scotland will be appealing for Taylor, but it will not be on the same scale as the Ramirez fight.

Taylor will have bigger options for a next fight than the English boxer, and he may decide to relinquish one or more of the belts for a bigger fight, which could conceivably include a Ramirez rematch. But the biggest fights are likely beyond 140 pounds.

Outside of a Ramirez rematch, there is nothing left for Taylor at junior welterweight, and he may instead decide to leave the division behind altogether for greener pastures.

There are bigger names and paydays at welterweight than junior welterweight, and now that WBC and IBF welterweight champion Errol Spence Jr. and Manny Pacquiao are set to meet in August, WBO champion Terence Crawford is still looking for that career-defining fight. Top Rank promoter Bob Arum has already floated the idea of a fight between current (Taylor) and former (Crawford) undisputed 140-pound champions in the fall.

Facing an undisputed champion is just the sort of name Crawford (37-0, 28 KOs), of Omaha, Nebraska has been yearning for on his record, and stepping up a division has always been on Taylor’s agenda. — Parkinson

What’s next for Ramirez?

Ramirez came close to winning the undisputed junior welterweight championship that he long dreamed of attaining. But a late flurry wasn’t enough to overcome a couple of knockdowns.

Despite suffering the first loss of his pro career, Ramirez should still be in the mix to regain at least one of the 140-pound belts by the end of the year. If Taylor vacates his belts and moves up to welterweight to face Crawford, there’s still a chance Ramirez gets a crack at a title.

In the post-fight news conference, Ramirez’s manager, Rick Mirigian, hinted at a future championship chance in the near future, as well as a potential rematch at welterweight between Taylor and Ramirez. Considering how good Saturday’s bout was, there should be an appetite for a second fight between them. — Baby