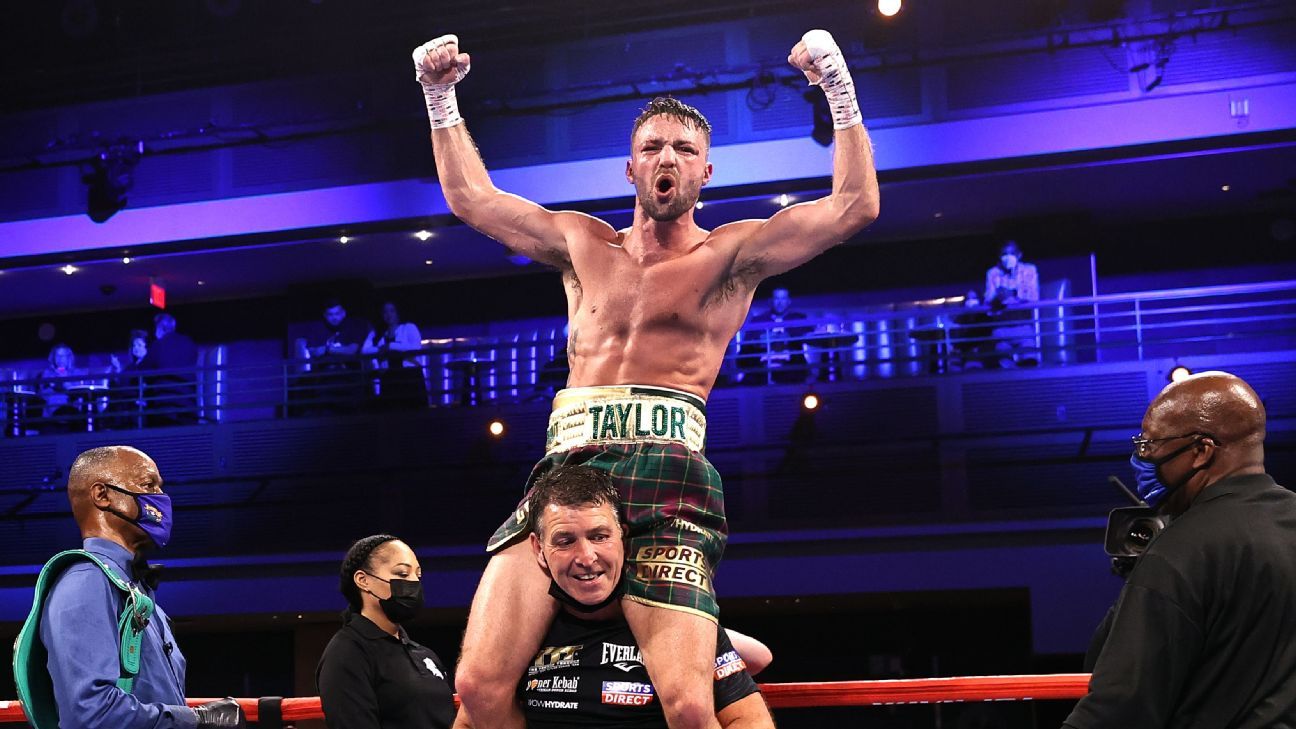 Josh Taylor made history on Saturday by becoming Great Britain’s first four-belt undisputed world champion with a performance that puts him in the same bracket as the best ever boxers from the United Kingdom.

The Scottish boxer became only the fifth male boxer to win a unification title fight with all four major belts (WBC, WBA, IBF and WBO) on the line when he floored Ramirez in the sixth and seventh rounds with a left hook and left uppercut, before weathering late pressure to win by scores of 114-112 on all three scorecards in Las Vegas.

Four-belt world title fights are rare — this was only the seventh in just over 30 years — and Taylor’s victory is likely to catapult him into the global pound-for-pound top 10 rankings.

It also marks him out as the best boxer from the U.K. today on form, ahead of rival world heavyweight champions Tyson Fury and Anthony Joshua whose clash for all four belts this summer fell through in the week leading up to Taylor vs. Ramirez.

Taylor beat the best there is at his division to unify all the belts in only his 18th fight; Fury and Joshua still have business to do if they want to match that achievement.

Taylor’s victory is among a long line of impressive performances by Brits in the U.S.

Englishman Randy Turpin’s points win over American Sugar Ray Robinson, the best ever boxer of all time, for the world middleweight title in London 1951 is the best ever win by a British boxer and will perhaps never be beaten.

But not many British boxers have pulled off a better win in the U.S. as Taylor did in Las Vegas, and it ensures he will be talked about for years to come along with the likes of others who pulled off outstanding wins in the U.S. such as Fury, Carl Frampton, Ricky Hatton, Carl Froch, Lennox Lewis, Joe Calzaghe, Naseem Hamed, Lloyd Honeyghan, Ken Buchanan, Ted ‘Kid’ Lewis and Bob Fitzsimmons.

It is up for debate whether Taylor trumps Fury’s stoppage win over Deontay Wilder to become a two-time heavyweight champion in Vegas in February last year. Fury’s stoppage win probably contained more drama and he also twice floored his opponent — but it was for one of the four belts, not all four.

Before Fury, heavyweight Lewis previously delivered the standout wins in the U.S. by a British boxer, knocking out Mike Tyson in Memphis in 2002 and unanimously outpointing Evander Holyfield in a rematch at the Thomas & Mack Center, Las Vegas in 1999. That win over Holyfield was significant as victory made Lewis Britain’s first undisputed world heavyweight champion since Bob Fitzsimmons, who reigned from 1897 to 1899.

Lewis’ Holyfield victory held greater significance than Taylor’s triumph and was a lot bigger fight in terms of viewers and revenue. Honeyghan’s victory over Donald Curry to become undisputed world welterweight champion in a massive shock in Atlantic City in 1986 is also bigger. Honeyghan dethroned boxing’s pound-for-pound king by forcing the American to retire after six rounds, whereas Ramirez does not figure in ESPN’s latest pound-for-pound top 10 rankings.

But Taylor’s win over Ramirez perhaps eclipses other big wins by Britons in Las Vegas like Hatton’s knockout of Mexican Jose Luis Castillo at welterweight in 2007, Calzaghe’s split decision points win over Bernard Hopkins at light-heavyweight a year later, and Minter’s split points win over Vito Antuofermo for the WBC and WBA world middleweight titles at Caesars Palace in 1980.

Frampton, who Taylor trained alongside at a London gym when he turned professional, became a two-weight world champion majority points win over Mexican Leo Santa Cruz to win the WBA world featherweight in Brooklyn in 2016. It was enough to make Frampton fighter of the year (2016), and Taylor’s win has to be considered at least as good or better.

For jaw-dropping drama, super-middleweight Froch’s last-gasp knockout of American Jermain Taylor to retain his WBC title in Connecticut in 2009 is hard to beat. But Taylor had lost two of his previous three fights, whereas Ramirez entered the ring an unbeaten two-belt champion.

Featherweight “Prince” Hamed also made a thrilling U.S. debut in 1997 when he got off the canvas three times before stopping home hero Kevin Kelley in the fourth round in New York.

Taylor will also inevitably draw comparisons with his fellow Edinburgh native Buchanan, now 75 and reportedly living in a care-home, who earned a 15-round points win over Ismael Laguna for the WBA lightweight title at Madison Square Garden, New York, in 1971, after battling for most of the fight with a closed left eye.

Whereever Taylor’s win over Ramirez sits in the list of British boxing wins overseas, what is certain is that it deserves to be among the best ten overseas in living memory.

A fistful of British boxers should still be considered ahead of Taylor, among them super-middleweight champion Calzaghe, heavyweight Lewis and even Taylor’s fellow Edinburgh resident Buchanan, who was the last Scottish boxer to become undisputed world champion before Taylor.

Taylor probably falls outside of this list of top ten British boxers for their achievements:

The Welshman had a brilliant unbeaten 46-fight career, making a record 21 world super-middleweight title defences with the highlights being wins over Mikkel Kessler, Jeff Lacy and Bernard Hopkins. Calzaghe’s 10-year reign as world champion is the longest in boxing behind heavyweight Joe Louis.

London-born heavyweight avenged both career defeats and beat all his rivals to become undisputed champion in 1999, with three reigns as world title-holder. He had big wins over Evander Holyfield and Mike Tyson, with most of his world title fights staged in the US.

The Welshman was known as the ‘The Mighty Atom’ and began boxing in fairground booths before later becoming world flyweight champion. He reigned from 1916 to 1923, and had 103 fights before his first loss.

The Scottish lightweight’s reign as world champion that began with a 15-round points win in searing heat in Puerto Rico in 1970. After unifying the two world title belts available at the time on points against Ruben Navarro in Los Angeles in 1971, Buchanan lost the title to a low blow from Roberto Duran Madison Square Garden, New York, in 1972.

The middleweight shocked the world when he beat the legendary Sugar Ray Robinson on points in 1951, then lost world title in a close rematch 68 days later.

The Nottingham-born super-middleweight fought in 12 consecutive world title fights, including classics against George Groves and Mikkel Kessler. Three-time world champion and unified the titles against Kessler in 2013.

The Londoner had two reigns as world welterweight champion in the 1980s after pulling off a shock win over pound-for-pound king Don Curry.

Manchester’s “Hitman” won world titles at light welterweight and welterweight and fought (and lost) to the best of his era in huge fights against Floyd Mayweather Jr. and Manny Pacquiao. Hatton defeated one of the best pound-for-pound fighters at the time in Kostya Tszyu for his first world title in 2005.