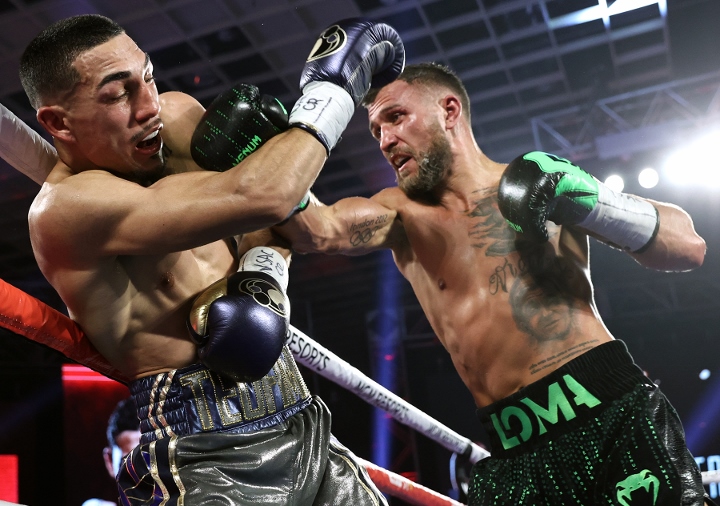 Vasiliy Lomachenko is ready to move on with his career—and away from wild conspiracy theories.

The former three-division titlist struggled to cope with his unanimous decision loss to Teofimo Lopez (16-0, 12KOs)  in their three-belt lightweight unification bout last October at MGM Grand Conference Center in Las Vegas. Lomachenko (14-2, 10KOs) went viral in the aftermath, though for all of the wrong reasons after alleging that the judges were dishonest and that the final punch statistics provided by Compubox were rigged against him.

Ukraine’s Lomachenko has since come down from that stance, though still not in a place where he feels his WBA/WBO lightweight title reign should have come to an end.

“My opinion now after watching (the fight) a lot of times, my opinion it was a draw,” Lomachenko told ESPN’s Mark Kriegel while in attendance at The Theater at Virgin Hotels Las Vegas.

Lomachenko was on hand to take in the latest installment of Top Rank Boxing on ESPN, which was topped by Josh Taylor’s 12-round unanimous decision win over Jose Ramirez to become undisputed junior welterweight champion. The same site will host Lomachenko’s next fight, when he faces Japan’s Masayoshi Nakatani on June 26.

The bout is just the second time that Lomachenko won’t have a major title at stake. The other occasion came in his pro debut in October 2013. The goal is to eventually return to that stage, though the intention for now is that is still among the best in the world.

Nakatani enters the fight on the heels of his biggest win to date, a come-from-behind 9th round knockout of Felix Verdejo last December in Las Vegas. The fight was first since a hard-fought 12-round loss to Lopez in their July 2019 title eliminator. Nakatani boasts a four-inch height advantage and more than five inches in reach over Lomachenko, who can’t think of a better opponent to next face.

“It’s the best choice for me,” Lomachenko said of the forthcoming matchup. “I want to compare myself with this guy (Lopez). He was close with (Lopez) in their fight. He’s a great opponent for me.”