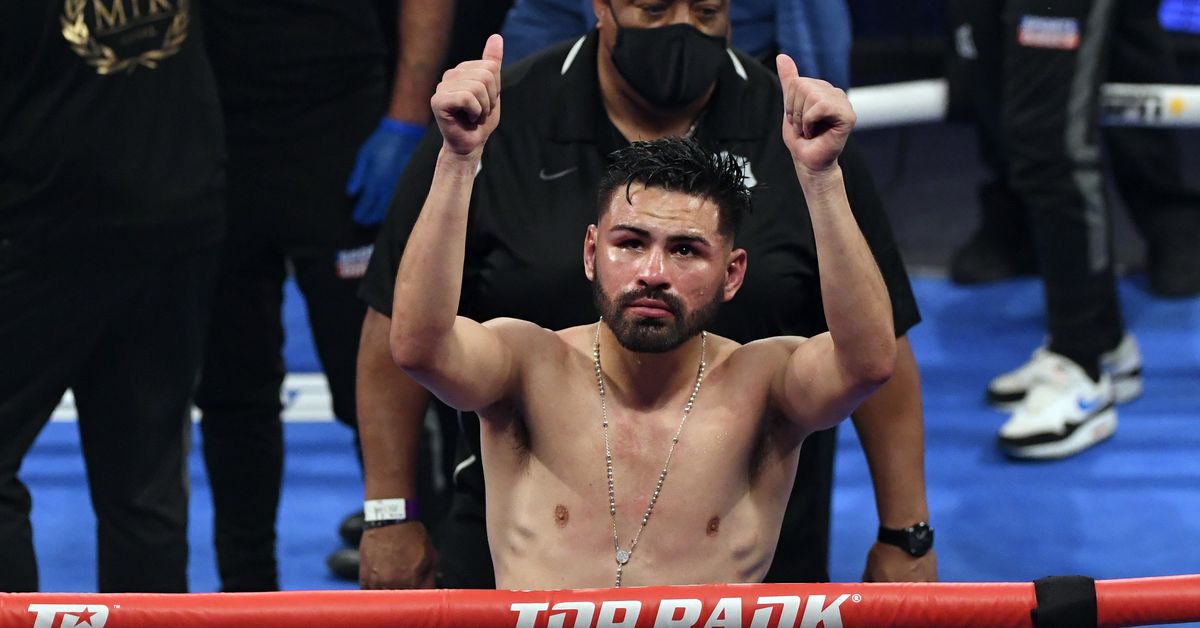 Jose Ramirez suffered the first loss of his pro career on Saturday night, dropping his two title belts to Josh Taylor, who is now the undisputed champion at 140 lbs, via decision in Las Vegas.

Ramirez (26-1, 17 KO) now looks forward with his career, and spoke about the fight at Top Rank’s press conference.

On the verbal exchange after the fight

“He showed respect, he showed that was him being a competitor throughout the week. He wanted to win so bad, he wanted to get into my mind. But he did apologize, because he came to find out my son was around. I’m thankful he did that, because — I told him on Friday, it doesn’t matter how far he gets, if he acts like that, he’s not really worth that much. But I’m glad I was able to see the real side of Josh Taylor after the fight. I’m ready to move on and I wish him the best and I congratulate him and his team. I wish them safe travels back to Scotland. His country should be very proud of him.”

On a possible rematch

“That’d be nice, of course, but I think Josh Taylor now has options, you know? But I would love to.”

On fighting back from the knockdowns

“In the fifth round I felt, like, ‘Man, I’m doing really well,’ again in the sixth round I felt like I was in it, too, until the knockdown came. Then I was like, shit, you know, I lost the round. It don’t matter how much more you do, once they score a knockdown against you, I gotta let that round go. But I wanted to show the next round that I was still in the fight, I was far away from giving up.”

On how hurt he felt Taylor was in the third round

“I wasn’t close to stopping him, I’m not gonna lie to you guys. I felt like I landed some good shots and I felt like I hurt him, but I knew Josh Taylor was well-prepared. I got him with a good body shot with an uppercut to the gut, and that started the whole thing. I landed some good shots on the temple. But I knew that fight wasn’t going to end in the third round. I knew I had to do a lot more. I felt like I was winning most of the rounds, to be honest. He got comfortable. Obviously his confidence grew after the flash knockdowns. It’s hard to beat a guy that has confidence and try to take control of the fight. That was my mistake, I had to try to take control of the fight multiple times because of my lack of discipline during the clinching.”

On whether he’ll watch the fight back

“I probably will. A fight like this, I can really see what I did wrong and also see what I did right. It can work both ways, to build confidence and build strategy and make me a better fighter.”

On what he felt he could have done better

“The fight’s over. I felt like I did what I could at the moment. When I put him on the ropes, I wish I would have done a little bit more. But he was well-prepared. Josh Taylor is a good fighter.”

On any “one thing” he underestimated with Taylor

“He was exactly the fighter — honestly, I thought he would be a little bit more aggressive, but he seemed like he was pacing himself. I think that worked pretty good for him, because boxing me, with a lot of punches — I can box, too, so I was able to pull back and also counter-punch. He changed his strategy a couple times to where he was being very, very patient, and I think that helped him. But other than that, he fought the way I expected him to fight.”

On criticism of referee Kenny Bayless

“We gotta learn how to lose and learn. I don’t want to take nothing away from the fight or the winners. It wasn’t my night tonight. I’m very blessed I made it this far.”

On how he’s feeling after a first loss

“Wishing I could go back and do it again! A little differently. But overall, I feel like I have a great family, a good family — not a team, but a good family. They’re gonna ride with me no matter what.”

On the seventh round knockdown

“I felt like (Bayless’) job was to break us. I stepped back, but he threw an uppercut. You guys saw it. When I’m in there it’s a whole different view than what you guys are seeing from the outside in. You guys make the decision on that. For me, the way I look at it, those are things I gotta work on, maybe, to be a little more careful and sometimes, be a little dirty! But those are things I gotta learn and move forward.”

On how Josh Taylor might do against Terence Crawford

On whether Taylor’s clinching bothered him

“He did what he had to do. He had a good coach out there.”