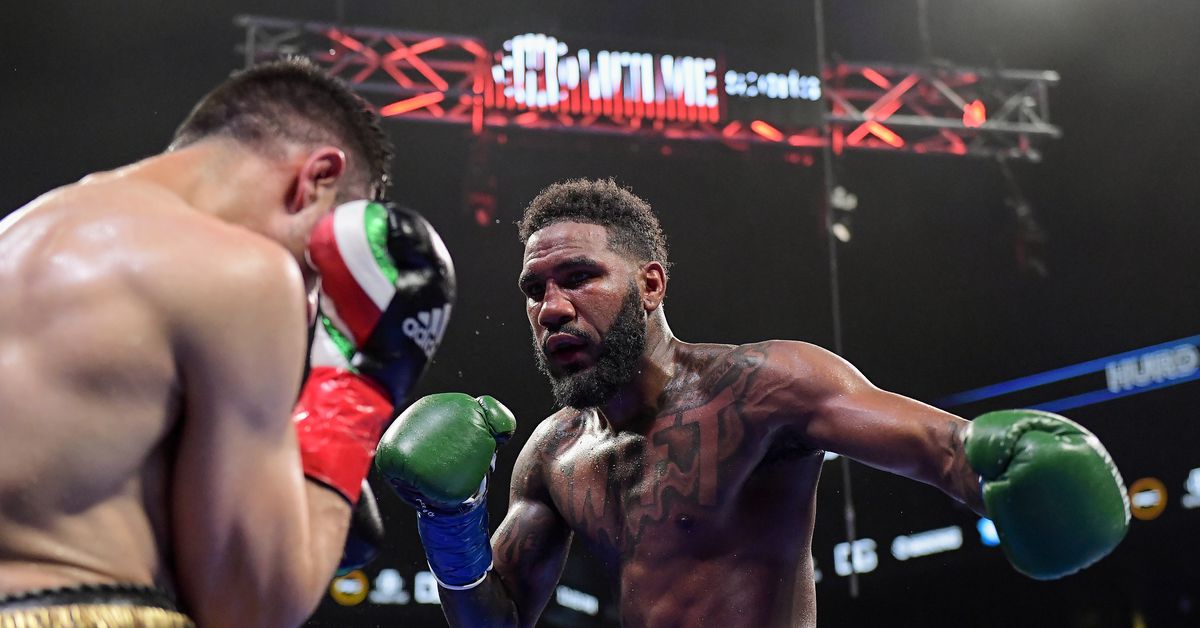 Former 154 lb titleholder Jarrett Hurd still plans to campaign at that weight, but will take a fight at 160 on June 6, when he faces Luis Arias on the Mayweather-Paul undercard in Miami.

Hurd (24-1, 16 KO) was last seen by most when he lost to Julian Williams in an upset in 2019, and made a quiet, rather uninspired return in Jan. 2020, where he gave up on his old full frontal assault style, boxing more en route to a 10-round decision win.

This time, he’s not talking up a commitment to any particular approach.

“He might think he’s catching me at the right time, but it’s not going to be a good time for him on June 6,” Hurd said. “I can box and I can bang, it doesn’t matter. We’ll decide on fight night which style I’m going to use. I know that I can beat him either way.”

Hurd, 30, has talked up a possible fight with Jermell Charlo — which, for the time being, Charlo has all but laughed off. But if Charlo beats Brian Castano for the full undisputed championship at 154 lbs in July, Hurd could be one of his better options unless he plans to move up in weight.

“I tried to work on my bad habits after my loss. I was a straight-forward guy who just came at you,” Hurd said. “I wanted to show in my last fight against Francisco Santana that I can use my height and range if I need to. I wanted to box all 10 rounds and I did that.

“I still have too much unfinished business at 154 lbs. I have a lot of fights, including my rematch against Julian Williams, that I still want to get. I want to regain my titles. Me and Jermell Charlo is probably the biggest fight at 154 right now. I want to handle that before I move up in weight.”

And Hurd wants to impress this time, adding, “I just need a dominant win on June 6. Luis Arias can make it ugly, but I have to go win convincingly and let everyone know I’m back. I don’t want to win in a sloppy way, I want to look good doing it.”

The 30-year-old Arias (18-2-1, 9 KO) hasn’t won a fight since 2017, and is 0-2-1 in his last three, losing clear decisions to Daniel Jacobs and Luke Keeler, and getting a draw against Gabriel Rosado between those fights. But despite coming up short in his biggest chances, Arias still has the belief that he can be a top fighter.

“I’m still young and I’m still fighting my way through. I just needed to make the proper adjustments,” he said. “I’m not going to be a desperate fighter. I’m going to go in there and fight the way I fight. I’ve always had championship-level fighting in me, but I just haven’t shown it. This is a perfect opportunity for me to show it.

“I’m coming after him. I have to win. He’s not going to have to find me. I’m going to be right there. If I have to box him in the middle of the ring or if I have to put my head in his chest and dog him out, then that’s what I got to do. From the opening bell to the final bell, if we make it to the final bell, I’m going to be on him. We’ll see what type of adjustments he makes, but I don’t feel he’s a better inside fighter than me and I don’t feel like he’s a better boxer than me.”

And while Hurd called Arias a “great fighter,” and notes that his opponent has never been stopped, he’s also skeptical that Arias really has the goods at this level.

“We’ve seen this story before from Arias. He talks a big game but look at his fights against top fighters,” Hurd said. “It doesn’t matter what weight I’m at, Arias knows what’s coming. I suffered a loss, but I got the win in my last fight and I’m on my way back.

‘CONOR BENN CAN’T HIDE FOREVER, HE NEEDS TO ANSWER!’ – Chris Eubank Jr on Benn silence
Chisora: Fury bout to deliver ‘best 1st round ever’
TYSON FURY WANTS ‘FIGHT TO THE DEATH’ vs Joshua & Big John vs Jake Paul BARE KNUCKLE!
Chocolatito: I Have Maybe Another Couple Of Years Left In Me
Ramirez vs Avelar FULL FIGHT: May 1, 2021 | PBC on FOX