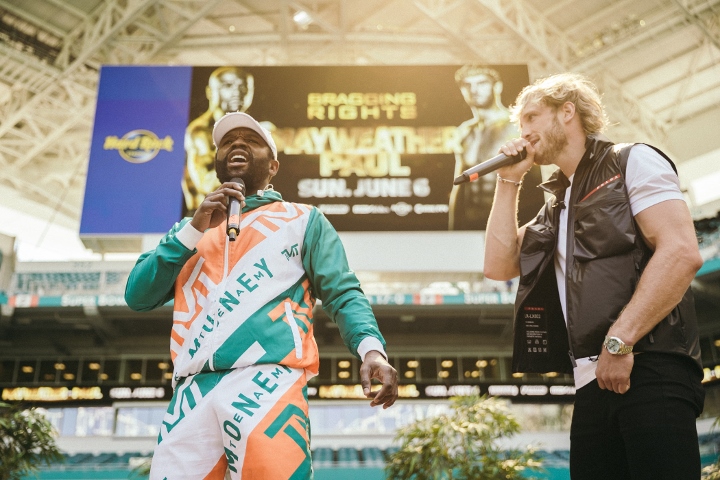 SHOWTIME has set its announce team for the event headlined by boxing great Floyd Mayweather and social media star Logan Paul with a mix of International Boxing Hall of Fame talent, sportscasting veterans and entertainers.

MAYWEATHER vs. PAUL: BRAGGING RIGHTS is being produced and distributed by Showtime PPV and will take place Sunday, June 6, live at 8 p.m. ET/5 p.m. PT at Hard Rock Stadium in Miami Gardens, Fla.

In advance of the event, the network will premiere an immersive 30-minute special titled INSIDE MAYWEATHER VS. PAUL on Saturday, May 29 at 9:30 p.m. ET/6:30 p.m. PT on SHOWTIME.

Showtime the longest-tenured network covering the sport of boxing, has tapped veteran sportscaster Brian Custer to host the unique event. He will be joined by the award-winning comedic duo Desus Nice and The Kid Mero, the hosts of the SHOWTIME hit late-night program DESUS & MERO, who will provide their unique and entertaining commentary throughout the event.

Calling the action at ringside will be the most versatile voice in combat sports, Mauro Ranallo, alongside Hall of Fame analyst Al Bernstein and three-division world champion Abner Mares. Also joining the robust team will be former MMA fighter and comedian Brendan Schaub of Showtime Sports’ digital series Below The Belt, serving as roving reporter. The in-ring announcer will be world-renowned Boxing Hall of Famer Jimmy Lennon Jr.

INSIDE MAYWEATHER VS. PAUL takes viewers inside the training camps of both superstars from two different worlds as they prepare for their fight. The Showtime cameras embed with the 44-year-old Mayweather, a 2020 International Boxing Hall of Fame inductee, in Las Vegas as he readies himself for the exhibition bout.

The cameras also follow the hugely popular Paul, who stands six inches taller than Mayweather and owns an 18-year age advantage, as he goes through a rigorous training camp in Puerto Rico and attempts to shock the world on June 6. INSIDE MAYWEATHER VS. PAUL also captures the moment when Mayweather and the Paul brothers met face-to-face for the first time and exchanged verbal jabs in Miami on May 6 during their kickoff press conference.

Showtime Sports will also provide extensive coverage of fight week events with commentary from a wide array of the network’s top digital combat sports and entertainment personalities including contributions from Schaub, Luke Thomas and Brian Campbell of MORNING KOMBAT and Matt Barnes and Stephen Jackson of ALL THE SMOKE to cover every angle.

Live coverage of fight-week events including Mayweather and Logan Paul media availabilities, the undercard press conference and the main event ceremonial weigh-in will stream live on the Showtime Sports YouTube Channel. In addition, Showtime Sports, in collaboration with Bleacher Report, will take fans inside the training camp of undercard fighter Chad Johnson, providing unique access to the highly entertaining NFL star as he prepares to enter the world of prizefighting on June 6.

The premiere of INSIDE MAYWEATHER VS. PAUL will immediately precede the Saturday, May 29 Showtime tripleheader headlined by WBC Bantamweight World Champion Nordine Oubaali and future Hall of Famer Nonito Donaire meeting in a long-awaited championship showdown.

Tyson Fury On Demetrius Andrade: “He’s The Most Avoided Man In All Of Boxing Today”
Hearn: Ngannou should go straight into big boxing fight, sells AJ bout on “the unknown”
Highlights and results: Navarrete wins war with Wilson to claim third world title
Rey Vargas & Subriel Matias | The PBC Podcast
Panel: Who should Artur Beterbiev and Anthony Yarde fight next?