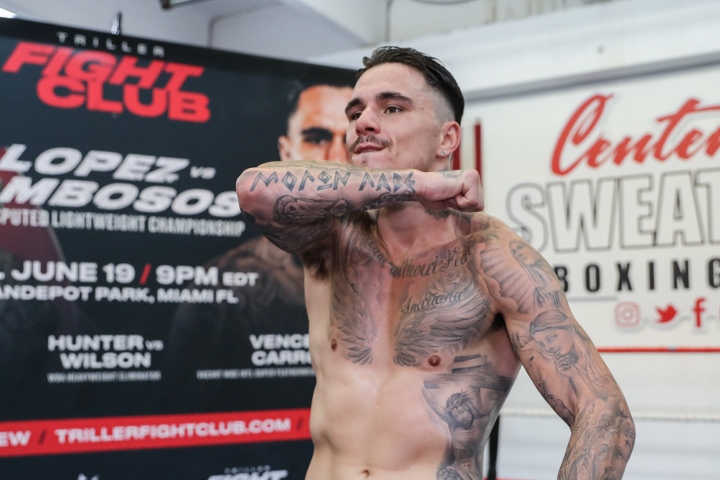 Their fight is set for Saturday, June 19 at Miami’s loanDepot Park, and live on pay-per-view.

Kambosos has accused Lopez of being a fraud.

He says Lopez consistently issues contradicting statements – and Kambosos has accused him of posing as a fighter coming out of Brooklyn.

“Lopez is a fugazi, a fraud, a fake. He’s got a fake persona filled with contradictions. Two months ago, he was talking about how gone Pacquaiao was, now he’s all over him because of the Spence fight announcement. What you see with me is real and what you get is real,” Kambosos said.

‘I’m more Brooklyn than Lopez is. He’s not from Brooklyn, he’s from here in Davie, FL where he went to school. It’s just a fake persona saying he’s from Brooklyn.

“The tremendous support I get from the American boxing fans is due to them wanting me to beat Lopez. They can see right through his fake persona.”

Lopez is predicting a very brutal knockout next month – and he plans to do it early.

Kambosos doubts that’s going to happen – believing that he’ll outbox Lopez for as long as their fight lasts.

“Whatever they’re saying, three rounds this and four rounds that. I’ll be laughing at him, coming forward and blasting away every round and after the third round, he’s in very big trouble,” Kambosos said.

“We’ve got a great game plan. When I fight its full tunnel vision and there’s no way I’m not coming out victorious. I won’t be over emotional at what he’s said leading up to the fight. I don’t care what his Dad says about me, he’s never had a fight in his life. If he’s got a problem my Dad is here too and they can have a crack.”

Thomas “Cornflake” LaManna to face Saul Roman in Atlantic City
Chris Small: Drawn to Boxing
The 10 best fights to make at cruiserweight
The Man Behind the Art
Bunce Diaries: The fortunes of the island boys at the Commonwealth Games