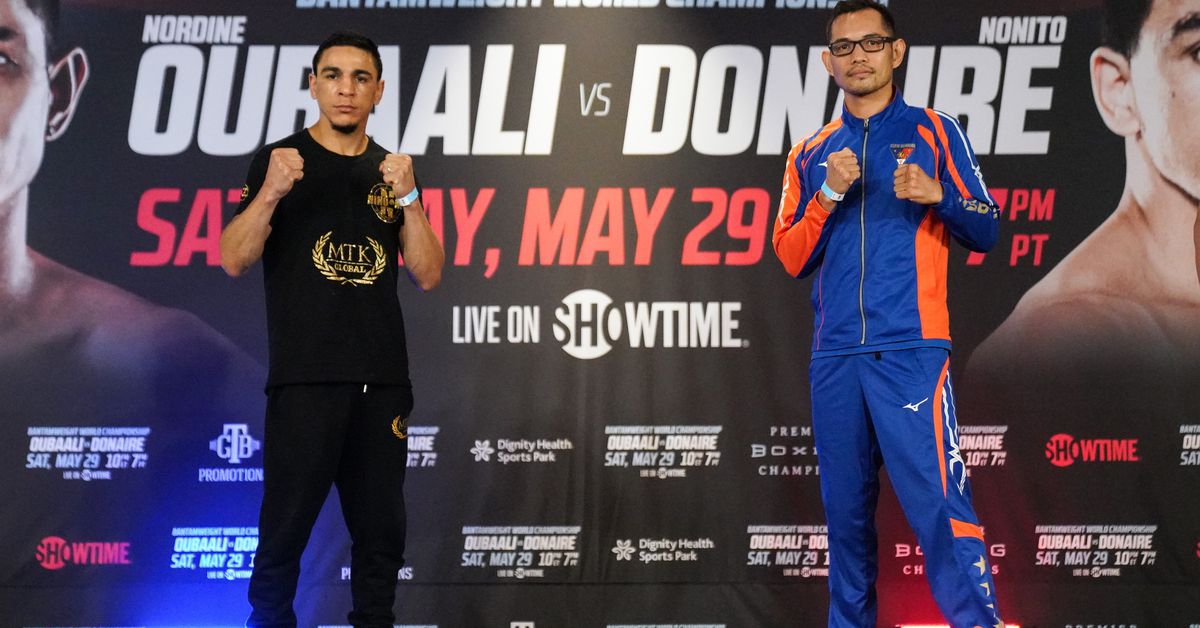 Saturday night on Showtime, Nonito Donaire will attempt to make further history in his already Hall of Fame-bound career, as he looks to take the WBC bantamweight title from Nordine Oubaali and become the oldest bantamweight titleholder ever.

Can he do it, or does Oubaali get the win and possibly send Donaire into retirement?

I’ve become an increasingly big fan of Nonito Donaire over the last — wow, nearly 14 years. I still remember the feeling he came basically out of nowhere to knock Vic Darchinyan out on Showtime, ending Darchinyan’s dominant and rather arrogant run as IBF flyweight champ. Darchinyan had been a surprising cornerstone of the Showtime boxing brand for a minute, and Nonito was expected by most to be another victim. He was anything but.

Donaire has not just been a great fighter across multiple weight classes — flyweight to bantamweight, very good at junior featherweight, still pretty solid as a featherweight if obviously fighting too high — but a gentleman and a credit to the sport. I have no idea what he’s got left here, really. Nobody but Donaire and his team really do, I suspect. He was terrific last time out, but that was a year-and-a-half ago and he’s a 38-year-old bantamweight now. Furthermore, Oubaali is no joke — he’s a skilled, accomplished fighter with some pop. I think this one winds up gritty and hard-hitting, and I’m going to pick Nonito, but not without controversy. My heart is leaning that way, my head leans to Oubaali. Donaire MD-12

How to Watch Oubaali vs Donaire

Nonito Donaire has shown something of a resurgence recently. Even in his loss to Naoya Inoue, Donaire proved he’s still got the talent and ability to go toe-to-toe with the best in the world, but at age 38 the question is more about consistency – as in can Donaire consistently get himself up to perform at that elite level. Personally I think that can be a tough question because athletes always feel like they’ve ‘still got it’ in their minds even after their bodies can no longer keep pace, but I think Donaire’s last performance has really inspired him. By that I mean going that close with Inoue has proven to him just how close he really is to regaining world title status, and I think he might parlay that inspiration to get over the hump here. Donaire might be the underdog in this outing but I think Donaire has the dimensions and experience to give Oubaali a tougher fight than some expect. I’m going to take Donaire to pull off the upset. Donaire UD-12

The thing is, I can actually see Donaire pulling the upset here; Oubaali leaves his right hand dangerously low when he bursts in and can linger too long in the pocket. A vintage Donaire could absolutely find a home for that left hook and knock Oubaali’s block clean off, and in some of his better moments against Naoya Inoue, I see enough of “The Filipino Flash” to give me hope. Then I see the slow feet and defensive lapses and away goes my conviction to call a Donaire knockout. Oubaali’s speed and control of range will sorely limit Donaire’s chances of landing the killer blow, and even if Donaire does find the mark, I’m not convinced the 38-year-old can end elite bantamweights with one punch anymore.

And if he can’t, Oubaali’s more than capable of landing enough power shots of his own to offset the occasional nasty counter.

That said, both men are coming off of lengthy layoffs and bouts with COVID, so there remain a lot of lingering questions. Even with that uncertainty, though, I say Oubaali’s in-and-out attack allows him to outland Donaire for a competitive decision victory. Oubaali UD-12