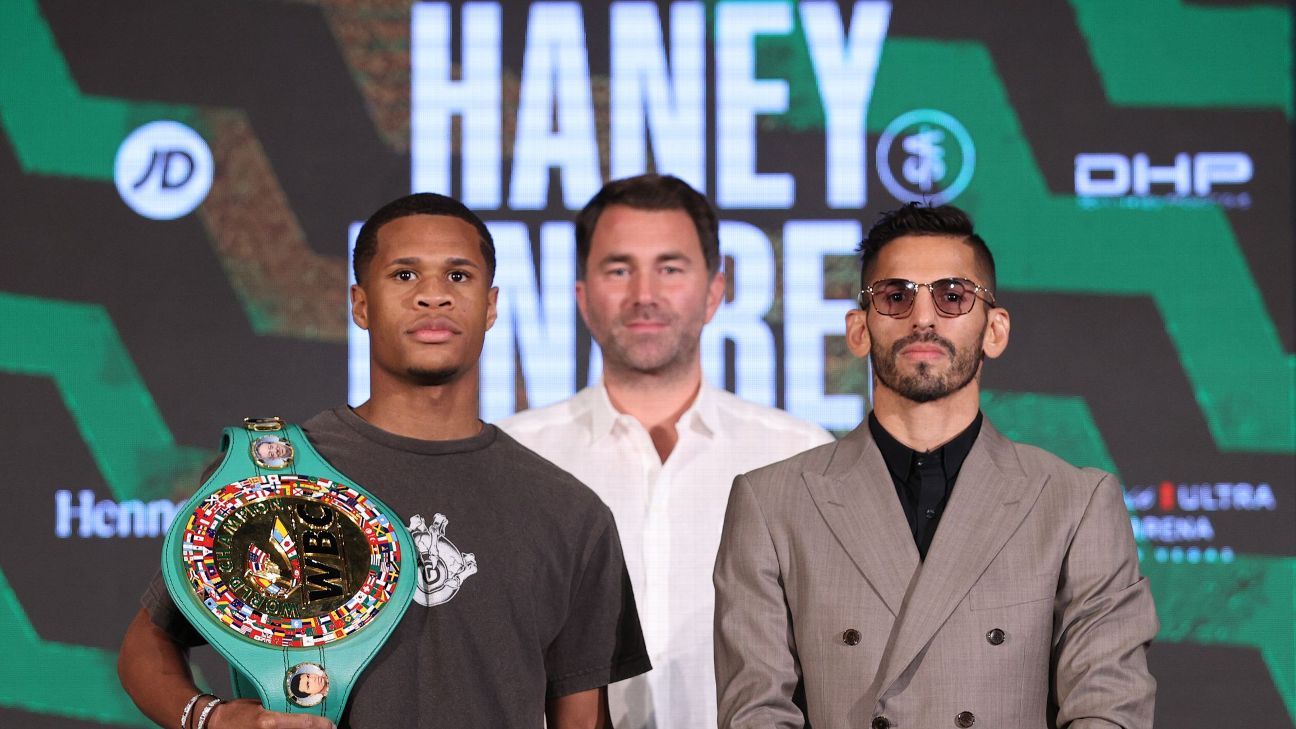 It’s hard for Devin Haney to find the right words.

After months of training and preparing for his fight Saturday, the undefeated WBC lightweight titleholder would much rather express himself by using his fists than his mouth.

At 135 pounds, a lot of attention has been paid to three-belt champion Teofimo Lopez, interim WBC world titlist Ryan Garcia and WBA secondary belt holder Gervonta Davis over the past year. And although Haney views his third title defense against Jorge Linares as his hardest bout yet (DAZN, 10 p.m. ET), it’s also helped him enter a mindset that he hasn’t yet experienced as a young professional — one that he believes will be valuable down the line when he finally crosses paths with the other big names at lightweight.

“This training camp, just everything has been different. It’s hard to explain, but just mentally, I’m just on a whole ‘nother level,” Haney told ESPN. “I needed a guy like Linares, or somebody like him, to bring it out of me.

“Hopefully in the next fight it’ll be somebody better, or whatever the case may be on paper, and it takes me to the next level.”

At 22 years, 199 days, Haney (25-0, 15 KOs) is the youngest world champion in all of boxing. He’s coming off an impressive unanimous decision victory over Yuriorkis Gamboa in November but despite the victory, Haney didn’t consider that to be one of his best performances. However, he was happy to prove a point to himself by outlanding Gamboa in every round of the fight.

“It just showed me that I definitely belong at this top level. I am one of the top guys,” Haney said of his last victory. “Sometimes it’s hard to knock the guy out that doesn’t want to be knocked out. Some types of guys, they come into a fight to try to survive and that’s the type of fighter that Gamboa was. He was a guy that went in there to survive, but a guy like Jorge Linares is different. He’s coming to win and he’s going to take chances in the fight, and that’s going to lead to a better performance from me.”

Like Gamboa, Linares, 35, is a veteran who is a three-division world titlist. He has nearly two decades of experience as a professional, and enters this bout against Haney — the 53rd of his pro career — not lacking any self-confidence.

“This is my moment to show the world that I still have a lot more to give at 135 pounds,” Linares said. “Devin Haney is a talented and quick-handed young man, but when I was his age, I had already become a world champion by snatching the title away from a real world champion like Oscar Larios. And now you can imagine how much more experience I have at an age where I feel stronger and better than ever.

“Without a doubt, it will be a tremendous fight, but I will demonstrate that Haney made a big mistake by accepting a challenge that he is still not ready to overcome.”

Linares (47-5, 29 KOs) is currently ESPN’s seventh-ranked lightweight, but a victory over Haney, currently No. 5, would certainly be an upset. Haney has outlanded opponents for 53 consecutive rounds, per ESPN Stats & Information. In fact, the last time an opponent landed more punches in a round against Haney was in September 2018, the second round of his fight against Juan Carlos Burgos. Haney also lands 40.8 percent of his power punches, according to CompuBox (10.2 per round) while opponents only land 8.2 punches per round, which is half of the lightweight average.

“[Linares] has experience and that’s one thing that he’s banking on, but if experience mattered so much [there] would be no new champions, boxing would never evolve and it would never be no one,” Haney said. “At one point, he was a young guy and he fought an older champion and he beat him. So, that’s how he became who he was. So, at the end of the day, the youth will take over in this fight with my skill set and everything that I bring to the table will show.”

So what’s next if Haney wins? Despite lots of talk between the big names at 135 pounds, nothing of significance has come together since Lopez’s victory over Vasiliy Lomachenko in October. For now, Haney is focused squarely on what’s standing directly in front of him.

“Of course, I’ve been saying I want the best, the biggest fights. I want to make the biggest fights happen but at the end of the day, my main focus is Jorge Linares right now. Without a victory [against] him, those [bigger] fights don’t happen.”

As long as he takes care of business against Linares, those big fights should come. And when they do, Haney will be ready to take advantage of the opportunity and get better with each victory.

“I don’t think that I’m even close to my prime yet,” Haney said. “I’m still 22 years old. I think around 30 years old, like around Canelo’s age, is when I’ll enter my prime. I’m still growing, I’m still getting better and better every day. I still don’t think that these guys can beat me right now, so just imagine when I’m in my prime.”

There’s also another world title on the line Saturday night in Carson, California. Nonito Donaire, 38, returns to the ring for the first time in more than a year and a half, following his war for the ages against Naoya Inoue in the World Boxing Super Series final. He’ll challenge WBC bantamweight world titlist Nordine Oubaali to try and win back the belt he previously held (along with the WBO version) in 2011.

In the 47th fight of his professional career, Donaire, a four-division world champion, looks to add another line to his Boxing Hall of Fame résumé. It will be the biggest challenge to date for the 2012 French Olympian Oubaali, who sports an undefeated 17-0 record.

Over the course of his career, Donaire has gone up against the best fighters from 112 pounds all the way up to 126. He had the fight of the year in November 2019 against Inoue, who needed almost a year before he got right back in the ring. This is Donaire’s first fight since that war with Inoue, too, and he was certainly not untouched.

In the Inoue fight, Donaire proved he certainly wasn’t past his prime, and despite the damage he took, I don’t think he’s done just yet. Donaire has to be coming into this fight with the momentum and confidence that came from his last performance.

As far as styles go, Donaire is a great counterpuncher. He can be a hunter, meaning that he can come behind the high guard and attack you. He can also fight off the back foot, if need be. Donaire has hand speed, and his experience carries him a long way. Honestly, Donaire can do a little bit of everything.

The last thing to go for a fighter at the tail end of their career is punching power and Donaire absolutely has that in his left hand. He throws beautiful hard left hooks.

Oubaali hasn’t fought anyone like Donaire. He beat Rau’shee Warren twice — once in the 2012 Olympics and again to win the title he’s defending against Donaire on Saturday. He faced Michael Conlan at those Olympics, too, and lost that fight. But he hasn’t been in the ring with anyone, to this point, who has the kind of pop that Donaire carries. And as far as big fight experience, and being in the ring with someone as experienced, knowledgeable and dangerous as Donaire, this is a new level for him in his professional career.

There are questions that a fighter can only answer against someone with the kind of strength Donaire carries. Can Oubaali take a shot, or a series of vicious punches? We will see.

Oubaali is a rhythm type of fighter. He’s a great counterpuncher. He stays close enough to try to make you miss, and then makes you pay. He’s a guy that’s always in motion. He likes to stay close, he moves just enough to get out of range, but he likes to counter.

Oubaali is able to find ways to work, even though he’s often the shorter guy. He’s able to find ways to land often, and at 5-foot-3, he’s punching up on these taller guys most of the time. A lot of his work is gonna come from underneath and over the top — look for the big left hand over the top and also the uppercut — especially if Donaire drops his head a little bit. His uppercut is a sneaky one — it’s the lead uppercut that Oubaali likes to throw.

As much as the uppercut can be an equalizer for Oubaali, it could also prove vital to Donaire. I believe Donaire can time Oubaali on the way in and catch him as he’s lunging forward. Watch the lead-hand or back-hand uppercut, depending which stance Donaire’s in.

One thing that throws Oubaali off is the jab. Donaire has a beautiful jab. That’s one of the key punches that Donaire should be looking to land. If Donaire can control Oubaali with the jab, he can break Oubaali’s timing and rhythm.

Another thing to think about, and it could be something that works in Oubaali’s favor, is Donaire’s previous struggles with shorter southpaws who are active. He lost to Guillermo Rigondeaux (5-foot-5) and Jessie Magdaleno (5-foot-4).

It’s going to be a very entertaining fight. It’s going to be fast-paced, but it’ll be a chess match in the beginning. I don’t think Oubaali’s going to try to outbox Donaire, but instead he will try to pick his spots to be aggressive with his combinations. Oubaali will look to place his shots and swarm Donaire, trying to bewilder him in spots. And he will have some success. Any time Donaire makes a mistake, or gets himself out of position, you’re gonna see Oubaali try to attack him in those areas.

The champion is extremely motivated. He’s undefeated, and when fighters like this get to this point in their pro careers, with as much of an amateur background as Oubaali has, they are extremely confident. They go in with the mindset that they can’t be beaten, and it just makes things really tough for anyone trying to take their belt from them.

Even though Donaire is 38, I think he’s going to be victorious. I don’t know if it’s going to be a knockout win, but I just think that he has more tools in his box than Oubaali.

Tale of the Tape

Braekhus targets title fight with Jonas, eager to become champion at 154
Boxing pound-for-pound rankings: Beterbiev wins but doesn’t impress; where does he land?
Emmanuel Navarrete Looking To Get Past Liam Wilson
Navarrete Gets Off The Canvas, Stops Wilson In Thriller
If Joshua can’t get a title fight, he’d consider Ngannou