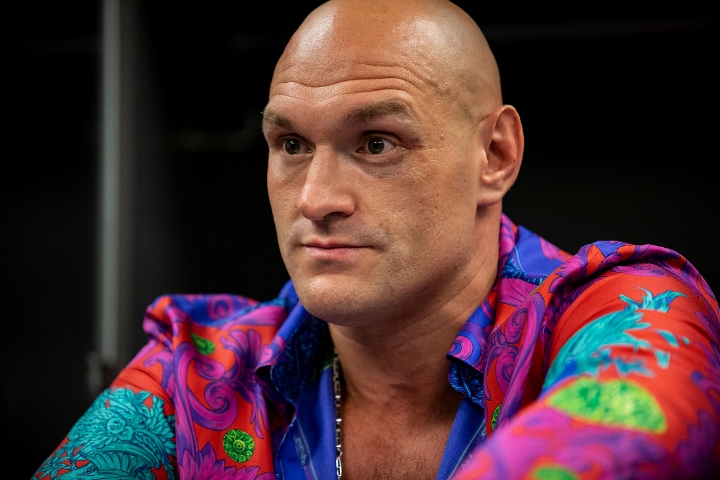 John Fury, the father of WBC heavyweight champion Tyson Fury, is very upset with the series of events which led to his son being forced to move forward with a trilogy fight against Deontay Wilder.

Last weekend, Fury was close to finalizing a deal to face IBF, IBO, WBA, WBO champion Anthony Joshua in a full division unification – which both sides had agreed would take place on August 14 in Saudi Arabia.

But then last Monday, an arbitrator issued a ruling which ordered Fury to honor his rematch clause with Deontay Wilder.

The contractual obligation stems from their February 2020 rematch, which saw Fury stop Wilder in seven rounds to capture the WBC title.

Fury and Wilder are now scheduled to collide on July 24th in Las Vegas, while Joshua is heading in the direction of a mandatory defense against Oleksandr Usyk.

John Fury would have liked to see his son throw away the WBC title and move forward with Joshua. But, what the elder Fury fails to realize, is the rematch clause calls for a third fight with or without the WBC title. In other words, Fury is unable to face anyone other than Wilder next.

Fury’s father blames his son’s team for the recent developments.

The boxer is co-promoted by Bob Arum of Top Rank and Frank Warren of Queensberry. And he’s managed by MTK Global.

“This is what happens when you get to the top; there’s a lot of leaches out there, a lot of hangers on. You can see what’s happening in America with him – appalling work to be honest with you. It’s diabolical isn’t it. You’re geared up to fight one man, and all of a sudden on the 11th hour it’s all sorted in 24 hours. He’s signing contracts in a whole other boxing venue. They’re around him like locust. I’m thinking to myself ‘how can he think straight’.

“He can blame his team, no one else. Anything rushed is no good and that’s been rushed. He was fighting AJ; I wanted him to fight AJ – I had no interest in Deontay Wilder. I told him in a phone conversation to chuck the belt in the bin, let him [Wilder] have it and fight AJ on August 14 as was planned.

“I’m concerned whether Tyson can raise his game for Wilder. Whether he gets complacent, makes a mistake. It’s got a good chance of going wrong out there. The danger point is getting fair play out there. At the minute, the American boxing fraternity has been embarrassed from the last escapade.

“Why wouldn’t you take a $20 million step-aside without fighting and a guaranteed shot at the winner, when you’re fighting for a lot less money and you’re risking getting your skull caved in again. It doesn’t make sense, so obviously the powers that be in America are involved, they’re calling the shots and trapped them both.

“Everybody seems to be doing as Bob Arum says. It’s not cricket is it? I mean no harm to Bob, he’s probably got his intentions right. But it’s all about money. All this is benefiting the Americans, because they never wanted the Saudi fight. This arbitration could have been squashed in December, but they didn’t – they ran out of time. Why didn’t they squash it when they knew this big fight was happening? I could rattle on about this all day, but the public know, they’re not fools. What can I say about it? Total garbage.”