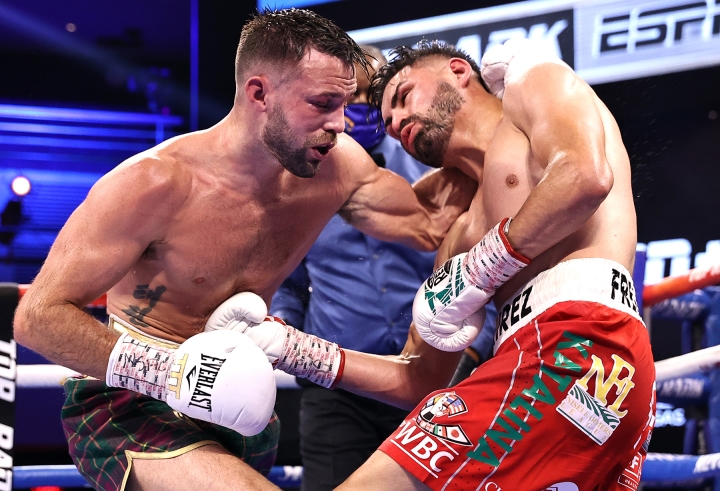 Subriel Matias has sensed for a while that his first career world title shot would come against Josh Taylor.

That feeling carried into last weekend’s undisputed junior welterweight champion, which pitted the unbeaten Scot versus Jose Ramirez (26-1, 17KOs) in a battle of unified titlists.  Taylor prevailed by unanimous decision in their memorable battle this past Saturday at Virgin Hotels Las Vegas, joining Terence Crawford as just the second fighter ever in the division to win all four major titles (WBC/WBA/IBF/WBO).

“I wasn’t surprised by the outcome,” Matias told BoxingScene.com, taking in the fight as an interested observer given his current career path. “In fact, Ramirez did (better) than I expected him to do.

“Josh Taylor is a great fighter and If I get the chance to face him one day, the facts will speak in the ring.”

Matias (16-1, 16KOs) had to overcome his first career defeat in order to claw his way into contention. The Puerto Rican knockout artist recovered from an upset points loss last February to overwhelm undefeated Malik Hawkins in a 6th round stoppage win last October. The win put Matias on the path to one day challenge for the division’s top prize, though he will have to survive a four-man tournament as ordered by the IBF to determine the sanctioning body’s next mandatory challenger.

The first step on that path for Matias comes this weekend, as he faces Batyr Jukembayev (18-0, 14KOs), a Kazakh southpaw based out of Montreal. The two meet this Saturday, as part of a Showtime tripleheader which airs live from Dignity Health Sports Park in Carson, California.

“I can’t count my eggs before they hatch,” Matias said of looking beyond this weekend. “My promise is to bust up my opponent. My focus is on Jukembayev right now, he is a stone in my shoe and I need to get rid of him.”