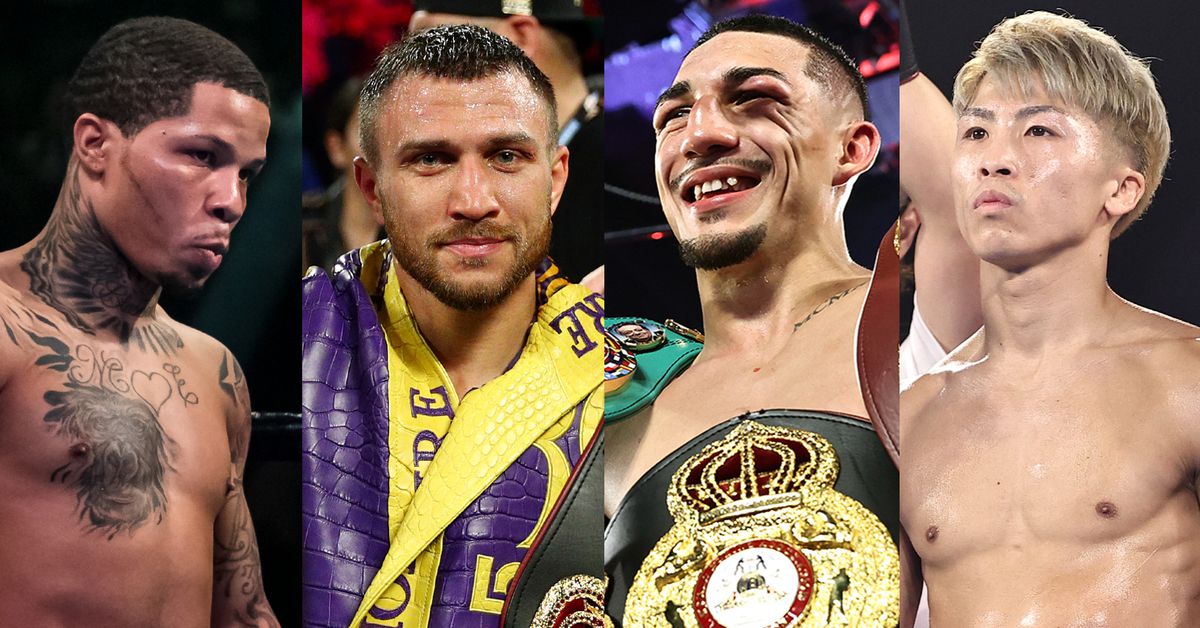 June has a lot of fights to choose from for a top 10 of the month’s boxing offerings.

Definitely a lot of fights to choose from.

Are they a good lot of fights to choose from? Well, there’s the rub.

Boxing’s had a good start to 2021, believe it or not (if you don’t want to believe that, you won’t), but while we have plenty of names in action in June, the matchups are largely left wanting for competitiveness, at least on paper.

Boxing’s biggest commercial event of the month will absolutely be the June 6 Showtime PPV main event featuring Floyd Mayweather and Logan Paul. Note that I am not calling it a “fight,” or am I saying it’s “between” them. It is an entertainment event featuring them. It is an exhibition, it has been said over and over that this is “entertainment,” which is also what WWE calls their programming.

I’m fine with it existing. But it’s not a fight.

One that will be a real, sanctioned fight if it happens is the June 19 PPV matchup between Julio Cesar Chavez Jr and Anderson “Spider” Silva. Silva is a mixed martial arts legend, one of the greatest of all time in that sport, and 1-1 in his career as a boxer, fighting once in 1998 and once in 2005, both times in Brazil. For years, he and Roy Jones Jr talked about doing a fight, but it never happened. Still could, I suppose, given how stupid boxing has gotten in different ways.

But Silva is 46 years old now and hasn’t even won in MMA since 2017, and that victory over Derek Brunson at UFC 208 was his first since 2012 (he had a 2015 win over Nick Diaz overturned for drug test failures).

This is meant to be a 180 lb catchweight, so we’ll see if Chavez bothers making weight. He’s never weighed 180 on the scales for a fight, mind you, never higher than just over 175, but it’s JCC Jr so that and him quitting with some excuse or other is always on the table. So is him pulling out of the fight late.

Stevenson (15-0, 8 KO) absolutely passes every eye test. He briefly held a title at 126, couldn’t get a good fight, moved up to 130, and now is, uh, struggling to get a good fight. This is for the interim WBO title, with Nakathila (21-1, 17 KO) his opponent, a 31-year-old from Namibia with an empty record. That doesn’t mean he can’t fight, but it means that on paper he’s a huge underdog against one of the most talented young fighters in the sport.

There remains a chance this could be for the full WBO title, as there was a contractual thing there, but it’s also possible everyone could agree to have WBO titlist Jamel Herring unify against WBC titlist Oscar Valdez, then Stevenson is guaranteed — truly, this time — the winner of that fight.

Pedraza (28-3, 13 KO) looked sharp in two Vegas “bubble” fights last year, beating Mikkel LesPierre and Javier Molina. That’s not the ace level of competition at 140, but he looked comfortable at the weight, much more so than he did losing to Jose Zepeda in 2019. But Zepeda’s a serious contender, too. Pedraza, a former titlist at 130 and 135, is still a good technician and a good fighter. Rodriguez (21-0, 14 KO) is a 26-year-old from New Jersey, taking a serious step up in class here, it’s a sink-or-swim matchup for him.

The 30-year-old Brant (26-2, 18 KO) is a former secondary WBA titlist at middleweight, who has seemingly abandoned his plan to face Ryota Murata a third time. He upset Murata in 2018, and it was a legit win, but Murata crushed him in their 2019 rematch inside of two rounds. The plan originally, as spoken then, was for Brant to take a tune-up and then fight Murata a third time. Didn’t pan out, in part due to COVID, but still hasn’t.

Brant looked good last we saw him, though, dominating against Vitalii Kopylenko in Aug. 2020. Alimkhanuly (9-0, 5 KO) is a Kazakh southpaw, 28 years old, has looked good as a pro but like Rodriguez against Pedraza, this is a serious step up on paper, he’s going in with a proven guy who can fight.

Inoue (20-0, 17 KO) is the No. 1 bantamweight in the world, one of the top pound-for-pound fighters in the world, and a true “must-see” guy. He is appointment viewing. He’s someone you have to watch fight.

Sadly, he’s stacked up on an absurdly busy boxing night, because no one thought June 18 might be good to do instead of being one of five (5) cards on Saturday, and his opponent, Dasmarinas (30-2-1, 20 KO), is not expected to be a challenge. The Filipino southpaw — nicknamed “Hot and Spicy,” which rules — is a mandatory challenger whose 2019 win over Kenny Demecillo has gotten him a fight that may go very badly, but at least might end very quickly. His best win was really over Karim Guerfi back in 2018, and he’s never faced anyone at actual world level.

This fight is here because Inoue is that good and that worth watching.

Melikuziev (7-0, 6 KO), aka “Bully Bek,” was recently given a four-year ban by AIBA for violating anti-doping rules in 2019, but the amateur boxing governing body doesn’t have any bearing on his professional career, so this fight is going ahead.

The 25-year-old Uzbek southpaw was meant to face Sergey Kovalev in January, but Kovalev failed a drug test, so Melikuziev is having an eventful year of headlines, really. He fought on Feb. 13, smashing an over-matched Morgan Fitch in three, and gets a better matchup here, one that I actually like a lot for what it is.

Rosado (25-13-1, 14 KO) gave up having a pretty record a long time ago, but the 35-year-old has classic Philly qualities — he’s tough, gritty, smart, and usually has a good plan. Rosado’s no great fighter or anything, but he’s a good test for Bek, and a better fighter than his record. Melikuziev should win it clearly if he’s the real deal, but if he’s got flaws for Rosado to expose, Rosado will expose them, even if he gets the short end of the stick in the end.

Munguia (36-0, 29 KO) is a former titlist at 154 and along with Ryan Garcia (for now) and Vergil Ortiz Jr, one of three fighters giving Golden Boy Promotions a pulse at the moment.

Munguia is a flawed fighter, but it’s also easy to forget he’s still only 24 years old. He’s never going to develop into being some great technician, he’s never going to suddenly develop better hand speed or airtight defense, but he’s someone who with the right coaching can absolutely maximize what he is, which is a fun fighter to watch with a “Mexican style” and some star quality. He won’t be Canelo Alvarez. He could absolutely be a less villainous Antonio Margarito.

Sulecki (29-2, 11 KO) can be a bit inconsistent, but Munguia had a horrible time with Dennis Hogan once, and it wasn’t that Hogan was some marvelous, world class championship contender. If you can fluster Munguia and get him to make mistakes, you can be a problem. Sulecki has had four fights of real note: A solid win over Jack Culcay in 2017, a competitive loss to Daniel Jacobs in 2018, a narrow win over Gabriel Rosado in 2019, and a shutout loss to Demetrius Andrade in 2020. Like I said, inconsistent results there — his best all-around performance might have actually been against Jacobs — but he’s the right sort of opponent for Munguia at this time.

Lopez (16-0, 12 KO) defends his WBA, IBF, and WBO lightweight titles against IBF mandatory Kambosos (19-0, 10 KO) in a fight that’s such a blockbuster that it got bullied off of its original June 5 date by Mayweather-Logan Paul deciding to take June 6.

Like Inoue-Dasmarinas, most aren’t expecting much here. Kambosos talks some good trash and will tell you all about his 32,000 rounds sparring with Manny Pacquiao. But it’s not like he went out and beat the crap out of Mickey Bey or Lee Selby in the two wins that got him here.

Also like Inoue-Dasmarinas, this features a “must-see” A-side, and I do think that if Kambosos is gonna go, he’s gonna go on his shield throwing everything he’s got at Teofimo. I cannot say I see the same coming from Dasmarinas, who frankly might not last long enough to find his shield.

You could argue this as the actual best matchup of the month. Lubin (23-1, 16 KO) is still probably best-known (he wouldn’t say “best”) for his first round KO loss to Jermell Charlo back in 2017.

But Lubin was a 22-year-old prospect rushed into that fight ahead of schedule. He wanted it and took the crack, and it was a mistake. Since then is what really counts to me, just as an observer. He accepted the L, brushed himself off, and got back to work. He’s since become a better, smarter fighter, someone who is starting to deliver on the promise he had going into that Charlo bout. He’s won five straight since then, and has continued to get sharper and more mature in the ring.

Rosario also fought Charlo in 2020, and while he had his moments in the fight, he was over-powered and knocked out in the eighth round. It’s a chance for either of these guys to chase down a Charlo rematch and try to even that score. This is must-win for both if they want to get there soon.

This one could wind up fascinating stylistically. Lomachenko (14-2, 10 KO) reportedly came into this Oct. 2020 loss to Teofimo Lopez with a bum shoulder, didn’t do anything for six rounds, and lost the fight. He’s not taken it very well, and has also since had shoulder surgery.

Lomachenko carries a sincere arrogance that has done a lot for him as a fighter, but also may have been his downfall against Teofimo, as he fought for half the fight like he figured it’d all just come to him and open up before him at any moment. It never really did, though he narrowed the gap late unless you were Julie Lederman.

Loma is also 33 years old and small at 135 lbs. Nakatani (19-1, 13 KO) is a very big lightweight, tall and rangy, with punching power and the ability to take good shots and recover even if he gets hurt. He went a full, hard 12 with Teofimo back in 2019, and came back to score a really impressive stoppage victory in his last bout in December against Felix Verdejo.

Lomachenko should absolutely be the favorite here, and clearly, but this one might be a bit of a tactical mistake. On the other hand, it’s a chance for Lomachenko to go out and really try to dice up a big, strong lightweight and put on more of a show doing it than Teofimo did.

This probably won’t be No. 1 for a lot of you, but I’m legitimately intrigued by this fight.

Davis (24-0, 23 KO) is a damn good fighter, someone whose skills I believe in, I think he’s the real deal. But Tank is going to be an absolutely tiny junior welterweight, which is where he’ll be fighting Barrios (26-0, 17 KO).

That said, I think it’s a very calculated risk, and maybe a smart one. Barrios is tall, he’ll have four or five inches on Davis, but he also started his career at 122 and first really settled in at 130 before moving up for good in 2017.

Still, it’s a lot of size, and Barrios has fought at this weight for years now, he’s filled out and is very comfortable now at 26. He’s also a tough kid who has been tested against Batyr Akhmedov and came through it. Davis has great power, fast hands, is really explosive offensively — at 126 and 130. He did not look quite so explosive at 135 against a shot and also one-legged Yuriorkis Gamboa in 2019.

Like I said, calculated risk. We’ll see if it pays off. In a month with no clear-cut top fight, this gets the nod for me.