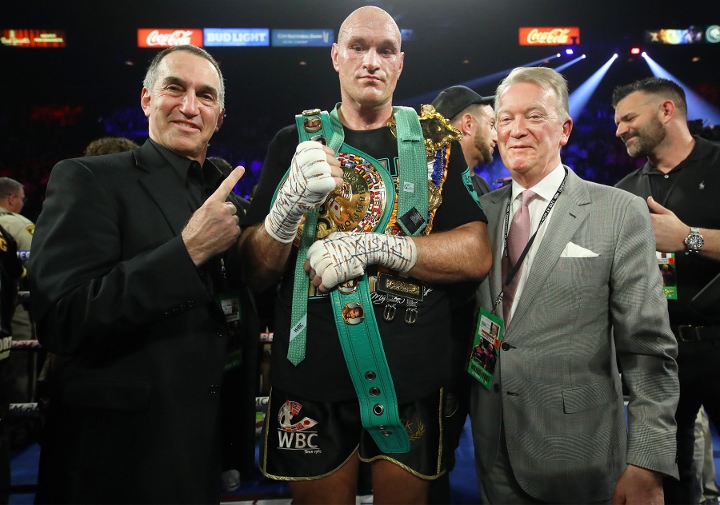 Frank Warren has admitted that the process that led to the breakdown of an undisputed world heavyweight title fight between Tyson Fry and Anthony Joshua was “a mess” but he does believe that the fight can happen in December.

Fury-Joshua was scrapped when a US judge ordered Fury to face Deontay Wilder instead, a fight that looks set to go ahead on July 24. John Fury, Tyson’s father, put the blame on Fury’s “team” in an interview on BT Sport, claiming he had “20,000 yes men around him”.

He also said he had told Fury to drop the belts and face Joshua instead, but Warren, who is Fury’s co-promoter along with Top Rank, said that had not been an option. While it had been down to Top Rank to enforce a reported cancellation clause last December, which could have seen Fury buy himself out of the return, instead of going to arbitration.

“It’s easy to say throw the belt in the bin, but it has no bearing whatsoever on the judgement cast in the arbitration case,” Warren said. “The judge ruled that Tyson must face Deontay Wilder a third time, title or not.

“In terms of this reported December cancellation clause, that is a question for Top Rank, who contracted with Wilder’s promoters as it was a US fight.”

Warren says he believes there were faults on both sides, as both Eddie Hearn, Joshua’s promoter, and Bob Arum both broke an agreement on confidentiality during the negotiations.

“The whole process has been a mess,” Warren said. “Hearn started breaching the agreement within 24 hours and, let’s be honest, our side has been just as bad. It would have been better if everyone had kept quiet until it was all signed and over the line.

“Instead we got stuck in a cycle where their side said something and our side had to respond. Too many agendas and egos took over. Boxing needs to learn from this process.

“The situation is the situation, everyone is frustrated but we are bound by the arbitration ruling so Tyson has to fight Wilder, and be at his best, forget the BS, get the win and then knock out AJ in December.”

Warren though said there was nothing suspicious in the Wilder fight being signed so quickly.

“And, for anyone asking why this fight was so quickly arranged… the terms of the fight were agreed in the contract for the second fight,” he said. “This was as simple as signing the paper.”

Astrolabio Eager For Statement Win Against Potapov in IBF Eliminator
Canelo Alvarez On Soccer Star Lionel Messi: “He Better Pray To God That I Don’t Find Him”
“I walk it like I talk it” Dennis McCann had full confidence he would become the new champion
Tyson Fury and Dereck Chisora hold their final press conference ahead of fight on December 3rd
Unsung 20th Century Fights: Shane Mosley vs John John Molina