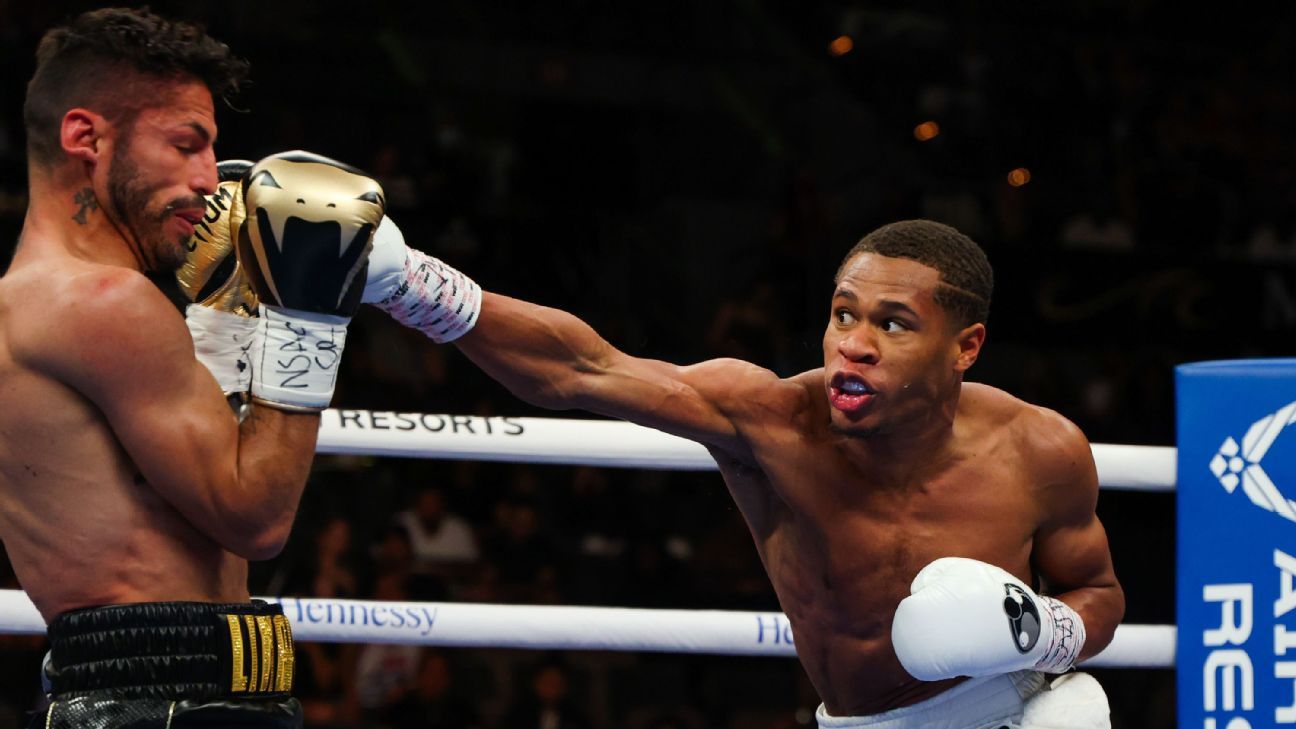 All it takes is one punch to spoil a good night.

Devin Haney’s Saturday night was going perfectly until Jorge Linares caught him with a big right hand in the 10th round. The moment that punch landed, the biggest test of Haney’s career became significantly tougher.

But the final six minutes and the fan reaction following his victory showed the dilemma Haney faces in his budding career. Even on a night when he did everything he could to show he was an exciting fighter worthy of the biggest matchups, Haney received a mixed reaction of boos and cheers.

Haney (26-0, 15 KOs) was dominating Linares up until the final seconds of the 10th round. Right before the bell, Linares (47-6, 29 KOs) wobbled Haney with a straight right hand. The champion walked on shaky legs back to his corner while Linares swung his arms to the side to make sure Haney knew where he was headed.

That type of punch was almost inevitable given Haney’s approach against the former champion. In Haney’s previous bout, he defeated Yuriorkis Gamboa in a unanimous decision that was both dominating and relatively unexciting. Against Linares, Haney opted to stand in front of the 35-year-old who still carried significant power and looked to throw power punches at the risk of getting caught with a big punch.

“That’s what the fans wanted to see — if I could go in there and walk my opponent down and hit him with him some big shots,” Haney said in the post-fight interview on DAZN.

After the fight, Haney denied he was hurt but his body language said otherwise. He spent the beginning of the 11th round trying to regain his footing. He held on to Linares and smothered the late rally, which the crowd booed with increasing ferocity over the final two rounds. At one point in the 12th, Haney lunged in from a distance to wrap Linares up, a signal that Haney was more than ready for the fight to be over.

It was the type of finish that made those inside the Mandalay Bay Resort and Casino forget the risks he took in the first nine rounds to put on the type of show to boost his career. Leading into the fight, the 22-year-old complained that other young stars in the division — names such as Teofimo Lopez and Ryan Garcia — were not willing to fight him.

After Garcia beat Luke Campbell earlier this year, Garcia didn’t mention Haney as potential opponent in his post-fight interview even though it made logical sense. If Haney looked great against Linares, it could create more pressure for other fighters to face the WBC champion and grow a fan base in a crowded division.

“The special fighters make a statement,” Matchroom Boxing promoter Eddie Hearn said in a DAZN interview a week before the fight. “And if [Haney] can make a statement against Jorge Linares, next week, it makes my job a lot easier with the broadcasters because they will be saying, ‘We want Lopez against Haney, we want Haney against Garcia.'”

For nine rounds and 170 seconds, Haney dazzled against a quality opponent. It was the exact performance he was looking for. But the finish might have undone all of his good work.

In the post-fight interview, Haney acknowledged how the deck might be stacked against him. Unlike former unified champion Vasiliy Lomachenko, Haney didn’t go down when he was hit with Linares’ best shot. Garcia overcame an early knockdown to defeat Campbell via TKO. Yet the vulnerability Haney showed against Linares could be counted against him.

“We saw other fighters in the lightweight division get dropped,” Haney said to DAZN. “The world praised them. I get hit with a big shot and they act like it was something. It was nothing.”

No matter how Haney got there, he escaped the Linares fight with his undefeated record and WBC belt intact. Haney said he still wants a bout against Lopez (16-0, 12 KOs), who holds the other three major belts in the 135-pound division.

Haney said he believed he made the statement he was looking for on Saturday night. That might depend on what fans remember the most from his victory over Linares.