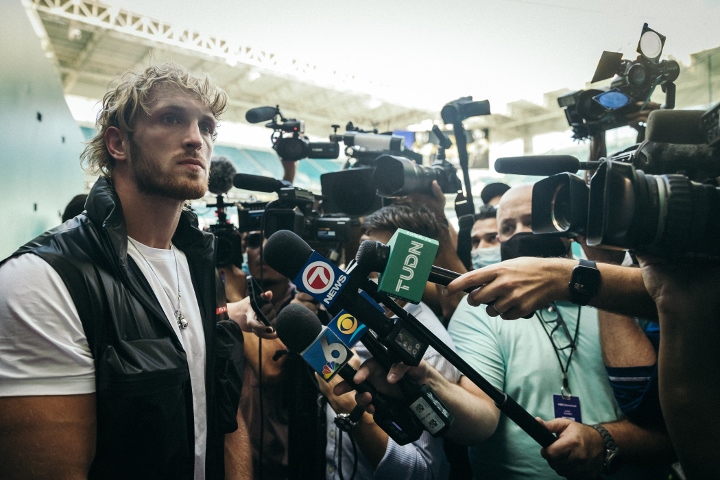 Logan Paul has drawn up a master plan ahead of his exhibition match against Floyd Mayweather Jr. on June 6 at the Hard Rock Stadium in Miami Gardens, Florida on Showtime pay-per-view ($49.99).

“Exhibition my ass. This is an eight-round fight, three minutes each. 10-ounce gloves,” Paul said on Showtime’s “Inside Mayweather vs. Paul” show.

“I’m going to knock him out and become the greatest boxer on the planet. Then I’m going to retire and not give Floyd the rematch … He doesn’t know who he’s getting in the ring with. He really thinks I’m a YouTuber. He really thinks I’m a fake fighter. I get it. Everything that I’ve portrayed online says the same thing. But we’re really about this life now. Floyd underestimating me is going to hurt him, I think.

“If you think about it, this truly is one of the most special, historic events ever. You have one of the greatest boxers of our generation, fighting, uh, me.”

Mayweather and Paul’s promotional tour took an ugly turn when both camps got into a brawl during a kickoff press conference.

Punches and unpleasantries were hurled, and Mayweather even threatened to kill Jake Paul following the hat histrionics.

Paul said the people should not be surprised that the event has been surrounded by pomp and circumstance during the build-up.

Diary of the Games: Watching the 2022 Commonwealth Games from ringside
Terence Crawford On Errol Spence Negotiations: “We’re “Working To Get It Done For Y’all”
Michael Conlan-Miguel Marriaga Preview
Hopkins Expects Canelo To Beat Down Golovkin, Stop Him in Sixth or Seventh
Jake Paul to pay undercard fighters 50 percent of purses for canceled event