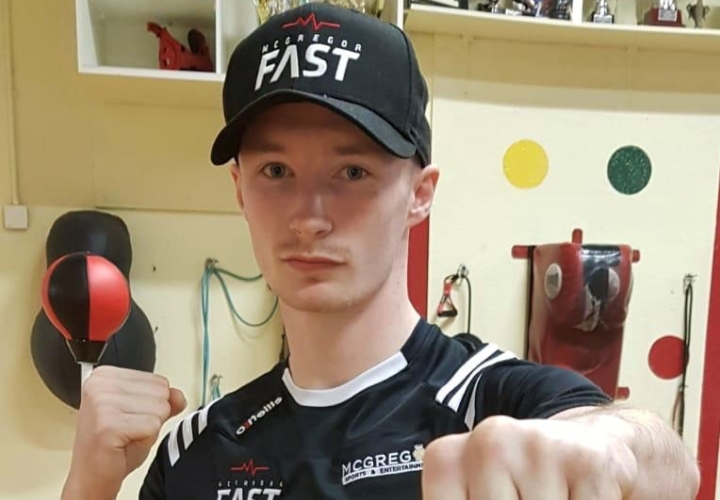 NEW QUEENSBERRY RECRUIT Willo Hayden proved earlier this year that he is more than ready to retaliate if he gets caught up in any social media crossfire.

The 19-year-old – unbeaten in 45 championship amateur fights in his native Ireland – was drafted in to help his great friend and fellow Crumlin native Conor McGregor prepare for his UFC 257 collision with Dustin Poirier in January.

Following McGregor’s defeat in Dubai, the unbeaten MMA superstar Khabib Nurmagomedov stuck the boot in on the Crumlin crew and its youngest member took exception to the accusation that the Notorious one was undercooked.

“This is what happened, when you change your team, leave the sparring partners who made you a champion and sparring with little kids, far away from reality,” wrote the Russian on Twitter, provoking a furious response from Hayden.

“Khabib, who is obviously Conor’s nemesis, they had a fight and Khabib won,” recalled Hayden, taking up the story. “After his last fight, which Conor lost, Khabib put out a tweet where he was blaming it on him changing his sparring partners, saying he was sparring little kids and training with little kids.

“I was the youngest on the team, so I took that personally. Who else could it have been aimed at?

“I took to Twitter, basically calling him out, saying if I am a little kid then he should have no problem sparring or boxing me and I would meet him anywhere in the world.

“I also told him that I am 100 percent confident I would destroy him in the boxing ring.”

Khabib, who only lost a single UFC round in his career, decided against replying.

“The tweet actually got taken down later that day because it said it went against the guidelines for inciting violence! The language was perfect, but it got reported by people.”

Moving back up to date, with Hayden poised to launch his professional career at light welterweight, he admits that having McGregor as a close associate will bring greater spotlight upon his own progress, but hopes that it’ll also help as he’s seen how to deal with the fame game.

“Of course, Conor is an inspiration and a role model,” considered the 11-time national champion.

“He has made mistakes, but to see someone who comes from the same area as me turn into the superstar that he is, shows me that it is possible and that anyone can do it.

“I don’t want to copy him though because I am my own person and I want to make it in my own way. You couldn’t copy him anyway.”

John Ryder believes his experience will see him take the gold against Zach Parker
Dillian Whyte: “People Are Thinking I’m A Wounded Lion”
Ryder: Parker’s Been Perfect So Far… I’m a Different Animal; I’m ‘The Gorilla’
4,000 punches and counting: How we got to Chocolatito-Estrada 3
PODCAST: Estrada-Chocolatito and Fury-Chisora previews, more