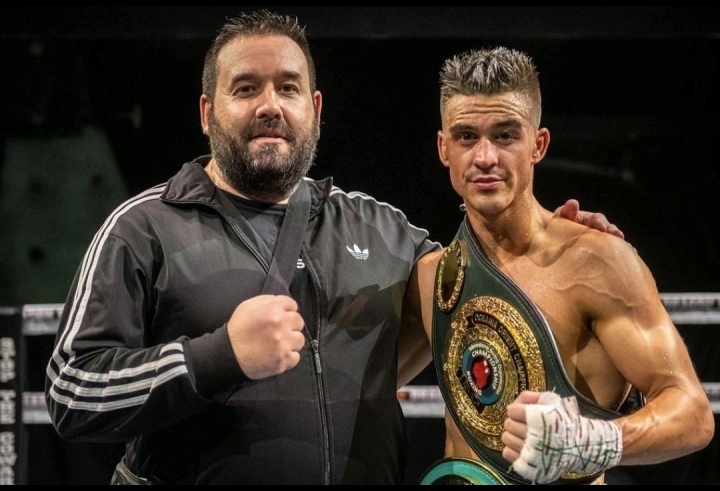 Mishra competed strongly in the opening rounds before England captured the vacant WBC Asia super featherweight championship, with a sixth round TKO stoppage.

Mishra started well winning the first round but by the third he was in trouble being hit with England’s hard body shots.

In rounds four and five, England’s combination body punches and upper cuts had Mishra reeling, and the fight ended in round six when Mishra could not continue.

IN OTHER NEWS: MTK Global has announced the signing of exciting youngster Adam Carberry ahead of his plans to turn professional.

Carberry had plenty of success as an amateur, winning several regional championship titles and Box Cup golds, and now heads to the paid ranks under the tutelage of former multiple-time world title challenger Martin Murray.

The duo have been working together in St Helens for a number of months, and Carberry feels that signing with MTK Global allows him to show off the skills he has learned under his trainer.

Carberry said: “I’m absolutely buzzing to be signing with a huge team like MTK Global. There’s not many bigger names in UK boxing, and I think they will provide a great platform for me to show people what I’m about.

“To be part of a team with fighters like Tyson Fury, Billy Joe Saunders and Josh Taylor is massive for a young fighter like me and just shows how big this platform is and as a new professional that’s amazing.

“As an amateur I won a few regional championship titles and a couple of box cup golds, I have always been proud of everything I’ve achieved, but the plan was to have a really good last season as an amateur. I think I should really have won more than I have, but obviously COVID put the breaks on that so now I’m just looking forward to unlocking my full potential as a professional.

“I’m actually enjoyed the transition from amateur to professional. It’s a lot of solid grafting which I’ve always enjoyed anyway, and learning the technical stuff from somebody like Martin Murray who has world level experience means I’m improving every day.

“I’ve been working with Martin for a couple of months now and we get on really well. He’s from the same area as me so he’s always been somebody I’ve looked up to so it’s great to be able to work with him. With the level Martin has operated at during his career and working with Oliver Harrison and Jamie Moore he has a lot of knowledge to pass on so I really do learn and improve every session.

“In the next 12 months I’m looking to get as many fights in as possible, and gain as much experience as I can.”

Ryad Merhy May Move Up in Weight, Fight With Makabu is Now Off
The 10 best fights to make at cruiserweight
Russell vs Barthelemy HIGHLIGHTS: July 30, 2022 | PBC on Showtime
Oleksandr Usyk Arranges For Rematch With Anthony Joshua To Be Broadcast In Ukraine For Free
Hopkins Expects Canelo To Beat Down Golovkin, Stop Him in Sixth or Seventh