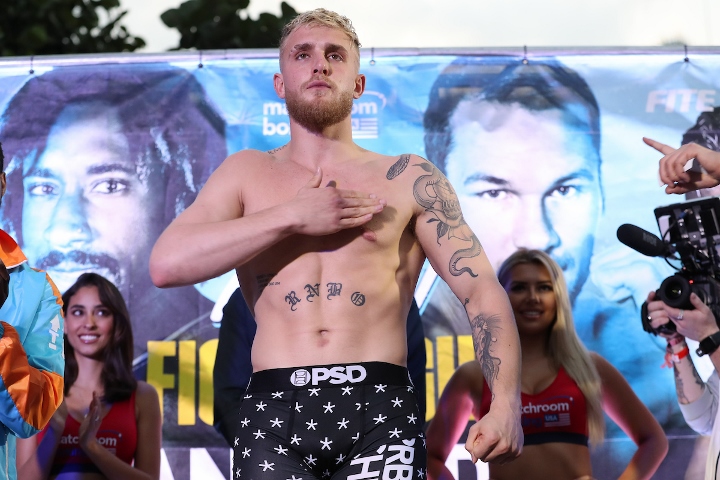 Jake Paul will fight former UFC welterweight champion Tyron Woodley in an upcoming Showtime pay-per-view boxing match, but it was another former MMA champion that had original dibs on fighting the YouTuber-turned-KO artist.

Former UFC middleweight champion and Hall of Fame fighter Michael Bisbing admitted that he passed on the opportunity to fight Paul shortly after Woodley surfaced as Paul’s opponent.

“I’m happy for him,” Bisping said Sunday on his podcast “Believe You Me.”

“I don’t know what [Woodley is] going to get paid, but I’ll tell you right now. I was offered $500,000 to fight Jake Paul, so I would assume it’s probably more since the fight’s happening. So good for him. He might go out there and might be getting $1 million, and I couldn’t be happier for Tyron, because he really deserves it.”

Now a commentator for the UFC, the 42-year-old former middleweight titleholder Bisping (30-9) has remained retired since 2017.

Paul (3-0, 3 KOs) is coming off an impressive KO win in April over former ONE champion Ben Askren.

Bisping believes his fellow MMA fighter with a wrestling-heavy background has a chance to beat Paul.

“This is a more interesting matchup [than the Askren fight], because before, everybody knew,” said Bisping. “Everybody didn’t know. Everybody f—— kissed Ben Askren’s a– and said he was going to wipe the floor. There was one person that was smart enough, and I’m sorry to say, it was me. I knew it was going to happen. But Tyron Woodley, I still think … he could put on a fight.”

“Fair play to Jake Paul as well. You can’t blame the f—– guy. He’s being an entrepreneur. He’s taking his fan base and parlaying it into a way of making money in the boxing world because he’s got a passion for combat sports. He’s taking on a real fight. Tyon Woodley is a proper fighter. It’s not a walk in the park.”

“Honestly it’s one of the best things I ever did.” 😊 Amir Khan is loving life outside of the ring
Parker: I’ve Wanted To Fight Ryder In Same Sense I Want To Fight All The Top Super Middleweights
Ryder eyes Alvarez after win via injury stoppage
Curtis Harper: I’m Gonna Go Toe-To-Toe With Jalolov & Do My Best To Take Him Down
BN Verdict: For John Ryder, the emotions of an anticlimax are becoming familiar ones