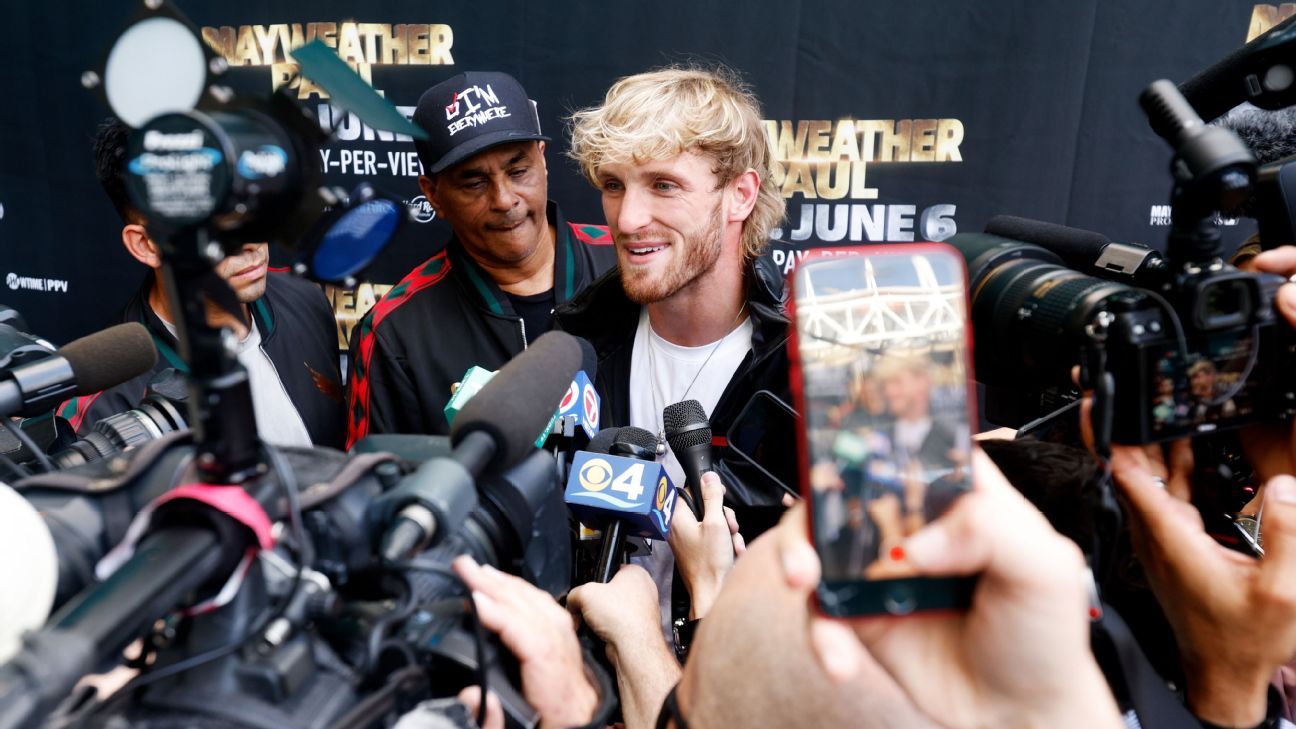 It was 10 days before his fight with Floyd Mayweather, and YouTube star Logan Paul was asked during a phone call about the rules of the exhibition boxing match scheduled for Sunday in Miami’s Hard Rock Stadium.

Will there be judges? Will knockouts be allowed? Will there even be a winner announced at the end?

The reason Paul didn’t know — or particularly care about — those details at the time was probably because none of that really mattered in the big picture. For the record, there will be eight three-minute rounds, 12-ounce gloves, no judges and no headgear.

And while knockouts are not prohibited, there won’t be an official winner declared. But the truth is, Paul was a winner as soon as Mayweather signed the contract.

“When you have an opportunity to do an event like this, you do it,” said Paul’s adviser, Guadalupe Valencia, who also works with rising boxing star Ryan Garcia.

Here’s what victory looks like for the 26-year-old Paul, who will enter the ring with an 0-1 professional boxing record — and with over 23 million YouTube subscribers.

If it makes dollars, it makes sense

Stephen A. Smith commends Logan and Jake Paul for bringing excitement back to boxing but questions why Floyd Mayweather accepted the match.

The Showtime pay-per-view costs $49.99, and it’s assumed Mayweather and Paul will each get a percentage of PPV units sold, as well as a base purse, with Mayweather expected to earn much more on both counts.

Paul said on his Impaulsive YouTube channel that he would have taken the fight for free, because it’s an “iconic opportunity. This is some legacy s—.

“But no, I didn’t take it for free. I’m going to probably make a good amount of money.”

“My goal is to be the biggest entertainer on the planet. And putting on big fights and big shows as a freelance fighter is a good way to do that.”

“I have no interest in being cruiserweight champ of the world,” Paul told ESPN. “I don’t care. My goal is to be the biggest entertainer on the planet. And putting on big fights and big shows as a freelance fighter is a good way to do that.”

Mayweather’s goal is to make easy money, especially since he retired from boxing nearly four years ago. When intriguing financial opportunities present themselves, he capitalizes.

“We all know that Floyd is one of the smartest entertainers in the sport of boxing,” Valencia said. “There’s a reason he’s fighting Logan.”

A degree of legitimacy

The 44-year-old Mayweather, 50-0, is one of the greatest fighters in boxing history, and Paul will not outbox his opponent Sunday. But just being in the ring with Mayweather will confer a measure of legitimacy on someone with almost no boxing credentials.

Paul has spent nearly two months in Puerto Rico training for the bout, sparring quality boxers such as Jean Pascal and Patrick Cora. Paul’s coach, Milton Lacroix, told ESPN that he would consider going the distance with Mayweather a victory.

“If you’re going to do eight rounds with a world-class fighter and you’re saying it’s an exhibition? This ain’t an exhibition. We have to take this very serious.”

Paul said on his YouTube channel that it’s the coolest thing in the world to grace the ring with one of the best boxers of all time and attempt to take his head off, but that’s not likely to happen. The beauty for Paul, though, is it doesn’t matter who’s considered a “winner,” because it’s a no-lose situation.

“If I win, it’s the greatest upset in the history of combat sports,” Paul said. “Time stands still. The Earth stops revolving on its axis. It’s the genesis.

“If Floyd Mayweather wins, nothing happens. No one cares. Congrats, bro, you beat a YouTuber. You want a cookie? Move on.”

Mayweather is the biggest pay-per-view draw in boxing history and an accomplished promoter. The YouTube video of Logan’s brother, Jake Paul, snatching Mayweather’s hat during a May 6 promotional event for Sunday’s fight generated millions of views.

“Jake Paul wanted some attention, and he got it,” Mayweather said at the time. “And so did I.”

The confluence of Mayweather’s star power as a boxer and the social media stardom of the Paul brothers is creating more buzz than nearly every boxing main event in recent years.

“Nobody is throwing away money,” Valencia said. “The fact that Showtime is getting involved tells you that a lot of smart people who are in the boxing industry have analyzed this and believe this is valuable entertainment that is going to bring money to the sport. They’re not doing it for any other reason.”

Jake Paul signed with Showtime last month. His next bout will be a Showtime PPV headliner against former UFC welterweight champion Tyron Woodley on Aug. 28. Logan Paul said after Mayweather he plans more big fights, both exhibitions and officially sanctioned boxing matches — and perhaps a crossover to MMA down the line.

Three years ago, when Logan fought fellow YouTuber KSI in an amateur bout, all of this seemed like a joke or fad. Now? Some still might find it to be a mockery of “real” boxing, but the truth is it’s one of the hottest things in combat sports. And the presence of Showtime and Mayweather has made the event — and to an extent Logan Paul’s brand — mainstream.

“Eventually, we’ll be significant enough in this vertical that people will have to put respect on our names. And those people will feel silly that they felt the opposite at first. I believe it takes an evolved person to put their bias aside and see what Jake and I are doing. Unfortunately, not a lot of people are living in that high-frequency, evolved state. And that’s not my f—ing problem.”