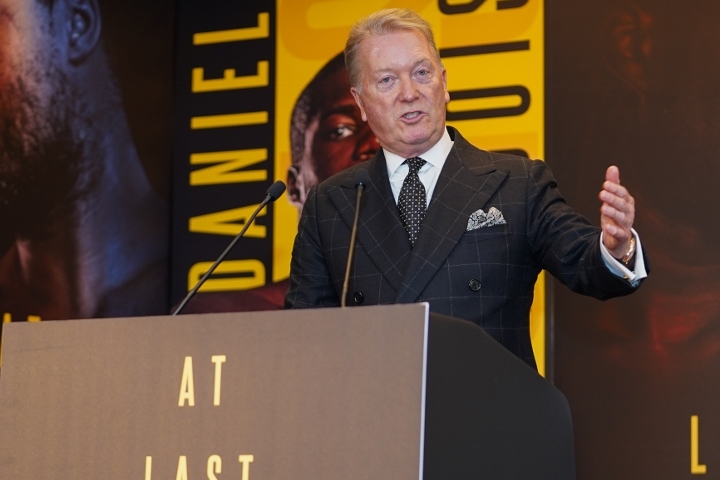 Last month. the fight was nearing an agreement for August 14 in Saudi Arabia.

However, an arbitrator ordered Fury to honor a rematch clause that was due to Deontay Wilder.

The contractual clause stems from their encounter in February 2020, when Fury stopped Wilder in seven rounds to capture the WBC title.

Their third fight is now set for July 24 in Las Vegas.

John Fury, father of Tyson, recently conducted an interview with BT Sport – where he blamed his son’s promoters, Warren and Bob Arum of Top Rank, for failing to finalize the deal with Joshua.

But, both sides were well aware that Wilder had an active legal action to enforce the rematch clause.

Warren explains that everyone should have stayed quiet – and strongly felt that Joshua’s promoter, Eddie Hearn of Matchroom, had a breached a confidentiality agreement by discussing the negotiations on a weekly basis.

If everyone had stayed quiet, says Warren, there would not have been such a strong backlash when Fury-Joshua fell apart.

“I don’t accept any blame at all. So don’t come dumping anything on my doorstep. Everyone’s frustrated, but I’m sick to death of talking about the same bullsh-t all the time,” Warren told IFL TV.

“[In future] just keep your mouth shut until something is signed. With a fight of this magnitude, until it’s signed and all the obstacles are cleared, why make statements about it?”

Boxing TV schedule for Aug. 11-13
Jake Paul to pay undercard fighters 50 percent of purses for canceled event
Russell vs Barthelemy HIGHLIGHTS: July 30, 2022 | PBC on Showtime
Michael Conlan: If Not Leigh Wood, I Want Any Other World Champion
Jake Paul To Pay Undercard Fighters 50% Of What They Would Have Earned On August 6th Card