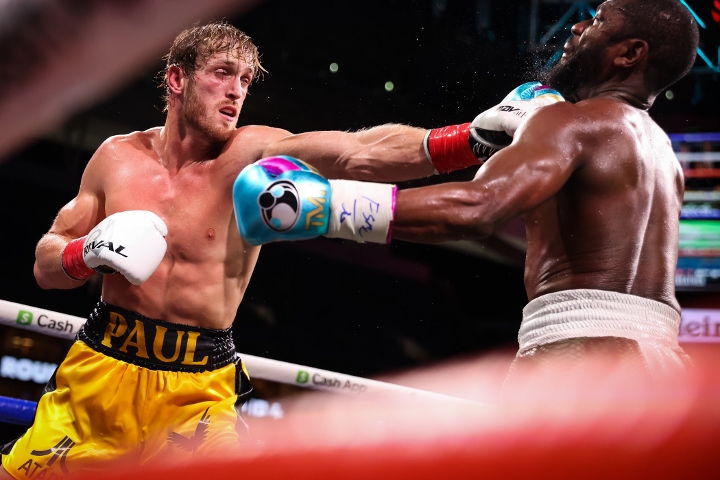 Paul was surprised, though, that the 44-year-old Mayweather wasn’t as quick as he expected during their unofficial fight. The bigger, younger Paul felt like Mayweather capitalized on virtually every mistake he made, but the social media and YouTube superstar realizes he didn’t face anywhere near a prime Mayweather.

“I mean, this goes without saying, but he’s definitely the most skilled fighter that I’ve ever went against,” Paul said during a post-fight press conference. “Any little error I made, he capitalized on. And, you know, I felt that immediately. It’s an honor. It’s an honor, but I can’t say, you know, I wasn’t prepared. He’s a little slower than I expected. I imagine his age is finally kicking in a little bit. ‘Father Time,’ even a specimen like Floyd Mayweather, I imagine he could feel it a little bit. I saw some of his hooks [coming]. … He blessed me with this opportunity, and I’m happy about that. And I don’t wanna sit here after the fact and, you know, talk sh!t. But I think his age like finally came into play. Like, I could see it. You know, he was coming forward, he was putting the pressure on me. And then, he started breathing a little heavier in round five and six, stopped coming forward, you know? And I had a second wind.”

Paul probably out-weighed Mayweather by 50-plus pounds once they entered the ring for their Showtime Pay-Per-View main event at Hard Rock Stadium. Mayweather landed most of the cleaner punches during a bout that didn’t produce an official result because judges weren’t assigned to score it.

The 26-year-old Paul appeared exhausted by the middle rounds and often held his lighter, older, shorter opponent to avoid absorbing flush punches. Paul said he was never hurt by any of Mayweather’s shots, yet he didn’t seem to agree with his younger brother, Jake, who claimed that he “wobbled” Mayweather.

Mayweather, meanwhile, realizes that this was far from his most memorable performance.

“Of course, at my age, I’m not going to perform like when I was 19,” Mayweather said. “I don’t supposed to. It’s all about growth and aging. You know, is my hair gonna be all black forever? Absolutely not. When I get older, it’s gonna turn all gray. I understand that. That’s a part of life. Am I gonna be able to fight like I fought when I fought Diego Corrales or Arturo Gatti? Absolutely not. And I understand that.”

Roy Jones Jnr and the post-fight blame game
“I will be the complete fighter,” says a defiant Anthony Yarde
Beterbiev, Yarde Deliver The Goods: Weekend Afterthoughts
Beterbiev Stops Yarde In Eight
Richardson Hitchins Believes He Should Be Headlining His Own Shows