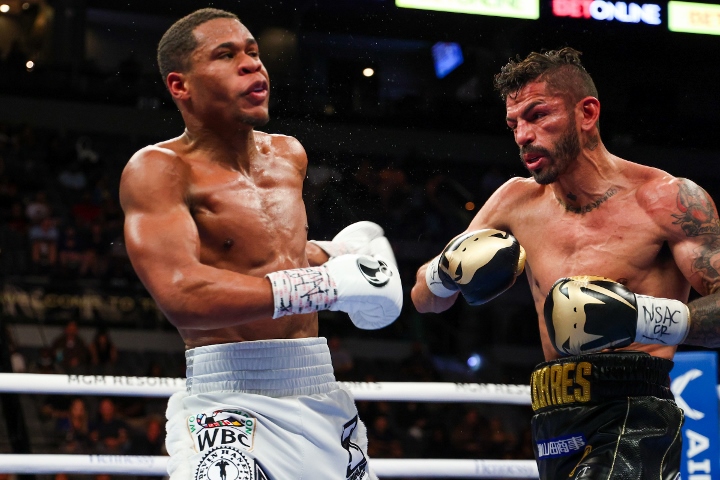 Joseph Diaz has more pressing tasks at hand, but he could not help but think of what he would do to Devin Haney after Jorge Linares buckled him in the 10th round of their lightweight title fight last month.

Haney (26-0, 15 KOs) was pitching what looked to be a shutout in his WBC lightweight title defense against Linares (47-6, 29 KOs) on May 29 in Las Vegas, but he ran into some trouble when the Venezuelan veteran tagged him with a right-left combination right before the end of the 10th round. Haney noticeably stumbled as he made his way back to his corner. Linares, however, was not able to capitalize on his momentum in the next two rounds. Haney would recover and fight back – albeit, amid plenty of holding – en route to a unanimous decision.

That missed window of opportunity had Diaz clicking his tongue from his living room sofa.

“I feel like Jorge Linares didn’t take grasp of the opportunity,” Diaz (31-1-1, 15 KOs) told SnowQueenLA. “He has all the opportunity in the world but when he had Devin Haney hurt, man, he should have went in for he kill.”

Diaz is slated to fight Javier Fortuna (36-2-1, 26 KOs), in what would be his lightweight debut, on July 9, at the Banc of California Stadium in Los Angeles. Diaz is coming off a tepid draw against Shavkatdzhon Rakhimov in February, a fight in which he missed weight and ended up having to relinquish his IBF featherweight belt, which he had originally wrested from Tevin Farmer last year.

“If me and Devin Haney end up fighting it’s going to be a lot tougher fight than what he fought against Jorge Linares that’s for sure,”  I’m still young, I’m 28 years old, I’m still hungry and I got a lot of skill level as well.”

When asked if he thought he would stop Haney if they fought, Diaz responded, “I think I will, I think I will. My pressure and my body shots, and my experience in that ring is a big factor with these young and upcoming fighters.”

“These upcoming fighters are very, very talented but they haven’t experienced the pro level yet, the elite level yet,” continued Diaz. “With Jorge Linares, that was a very good test for Devin Haney. Linares is old and going out of his career but he’s an experienced and smart and strong fighter [from whom] Haney was going to learn a lot. And he did. [Haney] was able to box and control his distance, he got hurt, but he was able to survive and get the ‘W.’ But with a guy like me, I have more grit, I have more hunger, I have more balls, when I see someone hurt, I’mma go for the kill.”