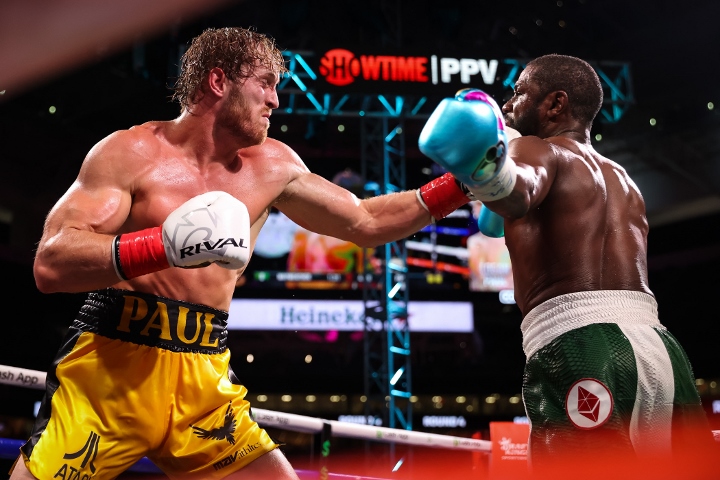 Tyson, who retired from boxing in 2005, returned to the sport to fight four division champion Roy Jones Jr. to a draw.

Their event generated a tremendous buyrate of 1.6 million pay-per-view purchases.

Since then, there have been a number of exhibition encounters placed on the schedule – including last Saturday’s eight round fight between five division champion Floyd Mayweather and Youtube star Logan Paul.

Mayweather, 44-years-old, was giving up youth, a lot of size, reach and height to the muscular Paul, who stands at 6’2 and weighed nearly 35-pounds more at Saturday’s official weigh-in.

Tyson believes Mayweather made a big mistake by fighting a 26-year-old opponent who is so much bigger.

If Mayweather ever decides to fight again, it should be against boxers his own size, says Tyson.

“I think Floyd should keep on trying. I don’t think he should fight a f—ing cruiserweight. I think he should continue fighting guys his own weight. What the f— is he doing? Fight Pacquiao again or something, keep in shape. Now that I think about it now, he should have had Paul lose a lot of weight. I was surprised [he didn’t do that]. A smart fighter would have made him suffer, made him starve. It was harder than Floyd anticipated, I believe,” Tyson told Zab Judah during their Instagram interview.

“Was he boxing a cruiserweight? How did he train for this? With experience? I believe when [Logan] was hitting him, he was hurting him a little bit because he’s not a 160-pound guy. [Logan is] a 190-pounder. I think that’s a heavyweight. 190-pounds to me is a heavyweight. I think [Mayweather] can learn from this one, fight guys more in his own category as far as weight is concerned.

“I think he’d make more money if he fought Pacquiao again. Floyd didn’t make the guy chase him. You make the big guy chase you. He needs to fight a guy at more of his weight division, 155-pounds or 160-pounds.”

PODCAST: Zepeda vs Prograis preview, Tank vs Garcia a done deal, MORE!
‘SAM GILLEY, I RATE HIM but I’m confident of beating anyone’ – SEAN ROBINSON
Curtis Harper: I’m Gonna Go Toe-To-Toe With Jalolov & Do My Best To Take Him Down
Team USA Clinches Three More Medals at 2022 Youth World Championships
”The sky is the limit… I want to touch the stars” Liam Davies on emphatic Baluta win 🏆 |