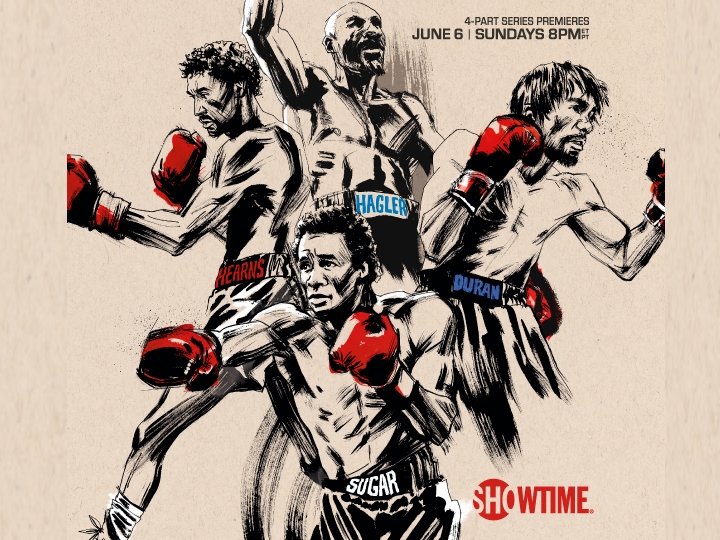 As cool under pressure as one of the four fighters he featured in the Showtime documentary series The Kings, director Mat Whitecross didn’t expect to feel any nerves creeping in as episode one premiered last Sunday night.

That cool comes with experience.

“Personally, I think my philosophy has changed over the years,” Whitecross laughed. “In the early days, particularly because most of the things I did were cinema, you get really nervous. We would have a ritual of going with family and friends on the opening night and we’d all sit in the back row and that kind of thing. And with my first couple of films, I would read all the critics and try and find that time to enjoy that process. But then I’d only believe the people telling you that you suck. (Laughs) So I stopped doing that pretty quickly. When it comes to this, I feel like I’ve gotten to that point where you enjoy it for what it is, and everything else is icing on the cake. Otherwise, you’ll go crazy. All the bits you can’t control, you’re at the mercy of other people being into it or not into it. Then you go nuts and you’ll never make anything. So I try to ignore that kind of thing.”

Well, he may be ignoring it, but he shouldn’t, as the reviews have been pretty near perfect for the four-part series, which focuses on the journey of The Four Kings – Roberto Duran, Marvin Hagler, Thomas Hearns and Sugar Ray Leonard – as well as the moment in time in which their epic round-robin of fights took place. For those who were there, or at least watching, it’s the perfect capture of an era in boxing that we may never see again. Forget the battles between Duran, Hagler, Hearns and Leonard; all throughout the sport in the 80s it was a Golden Age where the best fought the best, and when there were competitive fights on free television every weekend. But The Four Kings were the ones who garnered the headlines and mainstream attention in the post-Muhammad Ali and pre-Mike Tyson era. Add in the fact that they were unique personalities and polar opposites to their opponent on a particular night, and this was a natural for a series like this.

“Any one of these guys could easily support a ten-part miniseries, so then the idea of trying to squeeze them all in and try to get them to play off each other and play off that time, on the one hand that was a little bit scary because it’s very ambitious, which was great, but there’s a huge possibility that I screw up,” said Whitecross, who is a familiar name to those who enjoy documentary filmmaking as a whole, but not to those in boxing. Add in the fact that he’s a Brit making a series about three Americans and one Panamanian who fought all their bouts (save one in Montreal) in the United States, and you could say Showtime was rolling the dice with him at the helm. But not really, as his critically acclaimed films and resume proceeded him.

Yet while Whitecross was in search of a new project, nothing really hit the mark in discussions with previous collaborators Asif Kapadia and James Gay-Rees.

“Every single time they came back to me, it was either bad timing or it didn’t feel like a good fit to me,” he said. “And then James sent a hilarious email to me – ‘I know you don’t want to work with us and I know you hate all our projects and our ideas, but we had this opportunity presented to do something with Showtime, and we don’t really have a take on it at the moment other than we want to look at these four guys, the Four Kings, who are considered by people who are more informed and smarter than me, as four of the very greatest boxers of all-time and we want to do something on them, but we want to extrapolate from that and see the bigger picture behind that of America during that hugely important decade, and use their stories as a way to try and look back at the past and maybe what that moment in time meant.’”

That’s all it took. Whitecross was in, even though he was used to films about Oasis and Coldplay and not prizefighters.

“This isn’t really my world and I was too young to appreciate it at the time,” he said. “I was alive, but only just. Like a lot of people, I watch the big fights and I get excited about them and talk about them and everyone’s an expert, obviously, outside the ring, so we all talk about our favorite fighters. I’m not someone who watches boxing regularly, I don’t know that world that well, and I liked the idea of it.”

It was the perfect leap for someone whose favorite peers are those who have their own stamp that they take from project to project, while keeping their choices eclectic. And if Whitecross wanted eclectic, he came to the right sport.

“From my perspective, I always admired filmmakers and writers who did different things each time, so I loved the golden age of Hollywood, where those guys would finish a comedy on a Friday and start on a western on the Monday,” Whitecross said. “And a lot of directors who I admire, they have a signature style maybe, but they keep on challenging themselves. Not that I’m putting myself in this pantheon, but I worked a lot with Michael Winterbottom, he’s a British director, and every single film he does is very different from the last, but they’re all him. And the same with (Steven) Soderburgh, (Stanley) Kubrick, Paul Greengrass, all those people I really admire. I’ve done a few music projects, not deliberately, it’s just that every time you finish one, then there’s always gonna be people who want you to do the same thing because you’ve done it and they trust you to do that. But I was always looking to do other stuff.”

With Whitecross on board for The Kings, the Londoner now had three months to “try to do my PhD on boxing,” and while that required a lot of reading, watching and talking, the finished product does justice to the boxers, the era and the sport, a trifecta that isn’t easy to achieve. The only problem was that the series was running long – real long – when Showtime’s Stephen Espinoza and Vinnie Malhotra checked in for an early look seven months in.

“Stephen and Vinnie came over and watched an early cut that I had been doing of episode one, which is about two hours long, and we were only supposed to be doing three one-hour episodes at that point,” he said. “And Vinnie was like, ‘Listen, all my favorite bits are when you suddenly go off on a tangent and you’re discussing Ray Arcel or going into the promoters. How are you going to keep it in? You haven’t got enough screen time. You obviously need more screen time, and more actual time and you need more money. Let’s see if we can figure something out.’

A week later, Whitecross got a call.

“That’s completely unheard of, but they were great, they championed it.”

It’s no surprise when you watch the entire series, especially if you binge the whole thing and see it as one cohesive film, and yeah, the diehards among us hope there’s a Director’s Cut out there somewhere. But what about the million dollar question…how did Whitecross feel about spending two years in a business that can be, let’s say, unseemly at times?

“It’s funny because I’m from film and TV, which when I contrast it to other worlds and industries, it feels pretty messy, and there are a lot of unscrupulous people,” he said. “And then I always dip my toe into music, and you go, ‘Oh wow, this is so dysfunctional, it makes film look like it’s been run by choirboys.’ (Laughs) And then to step from music into boxing, it’s a whole new thing. (Laughs) But we were lucky for the most part.”

So it was a good experience, then?

“I’ve enjoyed the plunge,” said Whitecross, who concluded the project seeing the good, bad and the ugly of a sport promoter Don Elbaum once told writer Thomas Hauser was “a beautiful sickness.”

“I asked every single person we met to sit down and give me five, ten minutes of their thoughts,” Whitecross said. “Let’s give boxing its day in court and tell me everything you love about it and everything you hate about it, and why does it exist, and should it exist, and what has it done to the people you know and what’s it done to you? And I was amazed at people’s honestly. And every single person, from promoters to boxers to trainers to pundits, were all like, ‘I feel very, very conflicted about it. I love it, and it’s been my life, but I also see the dark side of it.’ So that was really interesting to me because I think there’s an honesty there that doesn’t exist in a lot of other industries.”

PAYBACK! – Artur Beterbiev “HE’S SLOW! NOT ME” after STOPPING Anthony Yarde | BT Sport Boxing
No Filter Boxing 🔥 A Night To Remember For Artur Beterbiev & Anthony Yarde 👏 Behind-The-Scenes
When you see a fighter fall face first, you know he got hit with a BIG punch 😳. #LenierPero
Nacho: Tank-Garcia is a Very Attractive Fight – It Should End By Knockout
Why we might have to wait until 2024 to see Artur Beterbiev vs. Dmitry Bivol in a must-see matchup