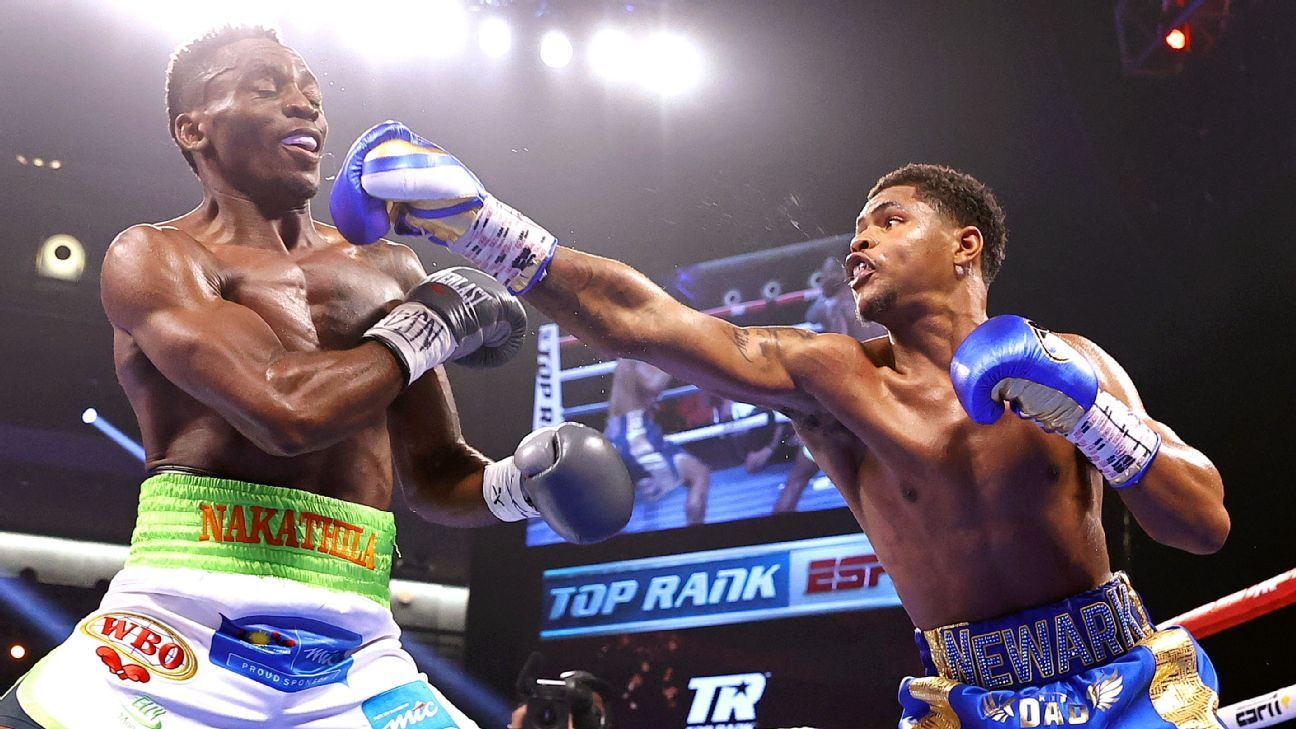 LAS VEGAS — Shakur Stevenson did everything well Saturday night except finish Jeremiah Nakathila for a knockout.

Instead, Stevenson (16-0, 8 KOs) dominated every second of the fight cruising to a shutout unanimous decision victory to win the WBO interim junior lightweight title.

All three judges scored the bout 120-107 in favor of Stevenson, who scored a knockdown of Nakathila (21-2, 17 KOs) in the fourth round from a short right hook.

But still there was a lingering feeling that it wasn’t quote the showcase that the 23-year-old rising star from Newark. wanted to put on in front of a supportive and active crowd at Virgins Hotel Theatre.

“To be honest, I didn’t really like my performance. I felt I could’ve performed a lot better,” Stevenson said. “You had an awkward fighter throwing hard punches, and he knows how to grab and get away. He was a real awkward fighter.”

“I tried to {get him out of there} a little bit, but I started getting hit with some solid shots. I ain’t really like it, but next time I’m going to work on moving my head a little bit more and step it up a little more.”

Stevenson outlanded Nakathila 114-to-28 in total punches. He also landed 46% of punches, compared to Nakathila’s 12% He appeared to have him hurt several times in the early rounds but failed to finish him.

“I was being real careful because he has power. But he was real scary. He was throw one punch and go in a shell,” Stevenson said. “I got the best defense in boxing. But I’ll be better in my next fights.”

This was the first Top Rank card fully opened to fans since before the covid-19 pandemic. It wasn’t a sellout, but a rough estimate was the arena which holds 2,100 people was about 75-80% full.

The 31-year-old Nakathila, of Namibia, was overmatched seemingly counting on one punch – his right hook – to land all night. He spent most of the night swinging widely and missing. He was hurt several times, and down once, but showed heart to finish all 12 rounds.

Stevenson hasn’t come close to losing a fight thus far in his career, but the lingering question for him remains his power and whether he can finish damaged opponents. This fight didn’t help his cause there.

But overall, Stevenson continues to be one of boxing’s stars of the future with some viewing him as a potential pound-for-pound king.

Stevenson is already looking ahead to his title opportunity which should come in his next fight. He’s the No.1 contender for both the WBO and WBC, and he’s been the mandatory challenger for the WBO title for several months now.

Top Rank has paperwork already drawn up for Stevenson to return to the ring in late fall or early winter 2021 against fellow southpaw WBO junior lightweight champion Jamel Herring for his title. “If I had the choice, I’d take Oscar Valdez, but if I have to beat up Jamel to get to it, I’ll do that, too,” Stevenson said. “Jamel can’t beat me. He knows what it is.”

Herring (23-2, 11 KOs) is coming off a knockout victory over Carl Frampton, and the added intrigue in that fight is both Herring and Stevenson train with WBO welterweight champion Bud Crawford.