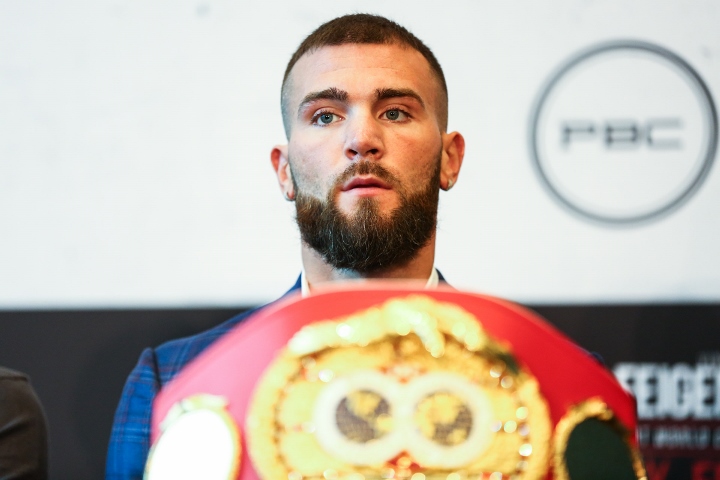 A childhood dream is well within reach for Caleb Plant.

Negotiations are due to begin for a potential superfight with pound-for-pound king and unified WBA/WBC/WBO super middleweight titlist Saul ‘Canelo’ Alvarez. Plant holds the IBF super middleweight title, with the winner of such a fight becoming the division’s first-ever undisputed champion in the three- or four-belt era.

“I’ve seen that movie 100 times,” Plant told BoxingScene.com of his lifelong vision of wearing such a crown. “I know by heart how it ends.”

To date, just two fighters in the 40-year history of the super middleweight division have held three belts. Guadalajara’s Alvarez (56-1-2, 38KOs) joined Hall of Fame former two-division champion Joe Calzaghe on that short list following his 8th round stoppage of England’s Billy Joe Saunders (30-1, 14KOs) on May 8 at AT&T Stadium in Arlington, Texas.

The fight marked the third in less than five months for Alvarez, whose run began with a 12-round win over previously unbeaten Callum Smith last December to claim the WBC and WBA super middleweight titles. The win over Saunders added the WBO belt to the collection, with Alvarez keen on next pursuing history in becoming the first-ever Mexican boxer to win all four major titles.

Plant (21-0, 12KOs) did his part by clearing a mandatory title defense from his slate following a 12-round shutout of Caleb Truax this past January in Los Angeles. The fight was the second straight mandatory for the 28-year-old Las Vegas-based Tennessee native who planned it that way to avoid such an obligation standing in the way of making boxing history.

Talks are expected to begin by month’s end, with hopes of reaching terms for a targeted September 18 fight date.

“I know our teams will sit down real soon and get this thing worked out,” believes Plant. “I have a great team around me. I don’t feel like anyone in this business does it better than Al Haymon. I have the best manager in the sport in Luis DeCubas. They have both been doing this at the highest level for a long time. I know that Canelo has a good team around him as well. I’ll leave that to them.”

Esparza: I Think A Rematch With Seniesa Estrada Will Be Bigger Than Taylor-Serrano
Hopkins Expects Canelo To Beat Down Golovkin, Stop Him in Sixth or Seventh
Jake Paul: I Was Ready To Go To 205 To Fight Rahman; These Guys Are Con Artists
Canelo: “Crawford Is A Better Fighter” Than Spence
Ortiz vs McKinson: Live updates and results, 9 pm ET