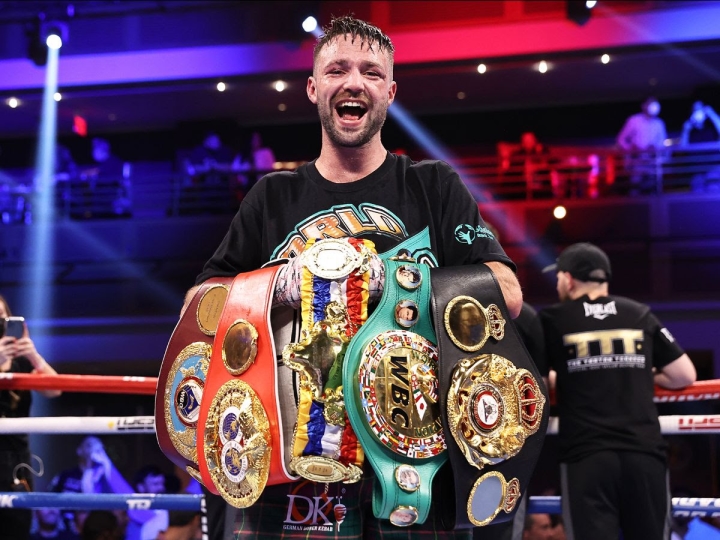 IBF, WBC, WBA, WBO junior welterweight champion Josh Taylor is still undecided when it comes to his next career move.

The big move would be a jump in weight to 147-pounds – where there are numerous options for Taylor. The easiest welterweight fight to put together would be a collision with Top Rank stablemate Terence Crawford, who holds the WBO title in the weight class.

Taylor will have to decide soon, before the sanctioning bodies begin to order his mandatory defenses.

“I have to decide soon,” he told BBC Scotland’s Euros Breakfast Show. “The ball’s in my court but I can’t take too much time because all the sanctioning bodies are going to start ordering me to fight the mandatory challengers. If I don’t fight them, I’ll get stripped of titles.

“I would like to go up and have the really big fights against Terrence Crawford, Errol Spence, my hero Manny Pacquiao and guys like that. They are real big fights and I call the 147 welterweight ‘the sexy division’. It’s a huge, deeply talented division.

“They are big-money fights as well, I’m coming to that point in my career now where I’ve worked hard so should get rewarded for it.”

If he decides to remain at 140, Taylor owes a mandatory defense to the WBO’s top man, undefeated Jack Catterall of England.

“I have a few good fights at 140 as well,” said Taylor. “I have my mandatory with Jack Catterall from Manchester coming up, I’ve got that option too.

“So I’m in a good position. I’ve got all the cards and a good hand. I’ll make the right decision when I’m ready.”