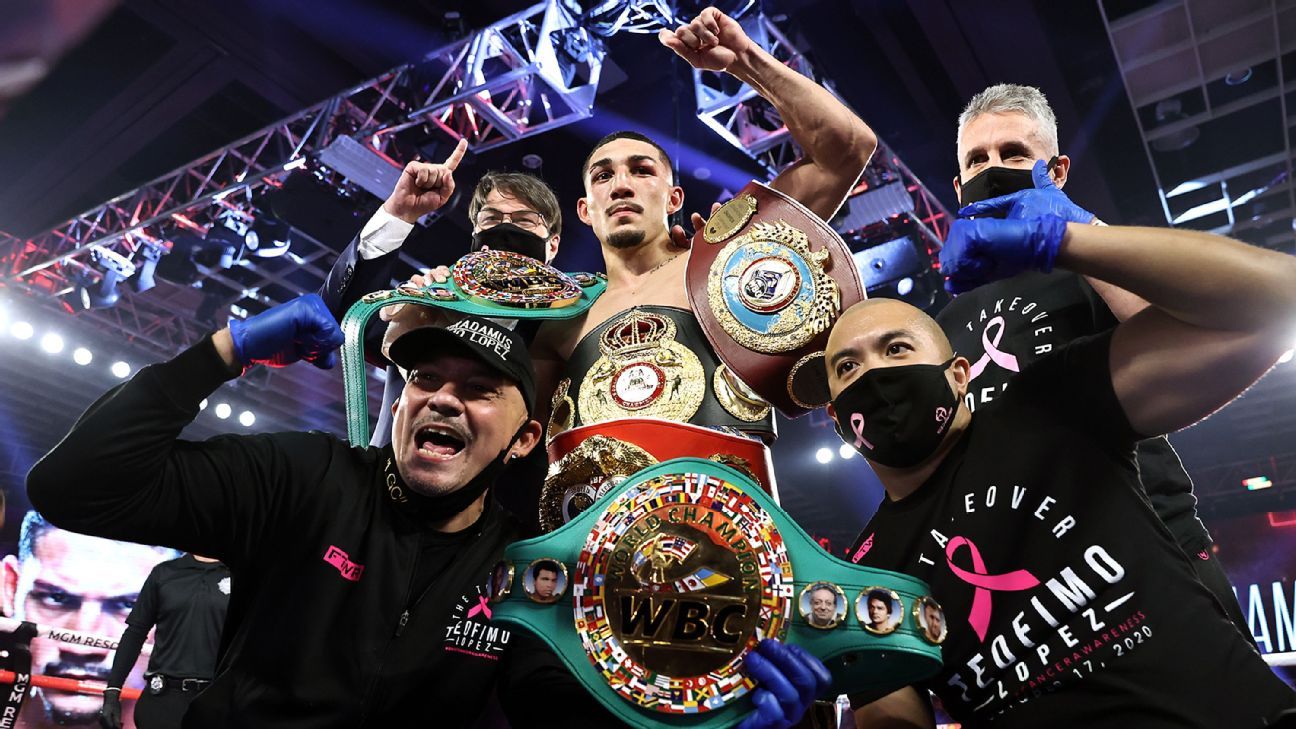 Multiple title fights. Famous names in exhibitions. A bunch of younger fighters in bouts that could push their careers forward.

Saturday, for a moment, might feel like boxing used to before the pandemic. There were times in the last year and a half where there were surely questions about when a day like this might again happen.

So here we are, with boxing cards on the books across the world and multiple major title bouts on different fight sheets all at once. It’s a sign the sport is busy again, that boxers might be able to make a living and schedule fights regularly if they want to.

Trying to catch all of these fights will be a challenge, but here are the fights — in order — that I believe you’ll want to watch.

The skinny: Lopez (16-0, 12 KOs) is an emerging star in the sport, and this is the chance to see if he’s ready to carry a pay-per-view card — something few fighters in today’s boxing world are able to do. The fight gained enough attention, and questions, that it ended up in a purse bid, where Triller came in with a big offer of more than $6 million to stage its largest non-exhibition, non-sideshow card to date. It’s a fight Lopez should win, after defeating Vasiliy Lomachenko to unify titles, but Kambosos (19-0, 10 KOs) can put up a challenge for the 23-year-old.

The skinny: While there are other interesting fights for Charlo (31-0, 22 KOs) to take down the road, this is one that should give him a good bit of work as he waits to take on another top middleweight. Montiel (22-4-2, 22 KOs) has won three of his last four fights, but he was knocked out in the second round of perhaps his most notable fight to date — against Jaime Munguia in 2017.

The skinny: Inoue (20-0, 17 KOs) is an impressive fighter who continues to handily beat anyone thrown in his way. He knocked out Jason Moloney in the seventh round last October, Emmanuel Rodriguez in the second round in 2019 and earned a difficult unanimous decision win over Nonito Donaire in 2019 to win the World Boxing Super Series tournament. Dasmarinas (30-2-1, 20 KOs) won a title eliminator in a decision over Kenny Demecillo in 2019 to reach this point, but he hasn’t faced many top fighters, and this should end up as a main event showcase fight to build Inoue’s profile in the United States.

The skinny: Mayer (14-0, 5 KOs) makes her first-ever title defense after beating Ewa Brodnicka last Halloween to win the crown. While her initial plan entering 2021 of only fighting unification title bouts didn’t pan out, Mayer instead will face Farias (26-4, 10 KOs), who is used to big-time fights. The former WBC junior welterweight titlist’s four losses have all come in title fights (Delfine Persoon in 2014, Cecilia Braekus in 2017 and Jessica McCaskill in 2018 and 2019).

The skinny: In a world where MMA fighters have been crossing over into boxing matches and YouTube stars are creating some of the more buzzworthy fights — rightly or wrongly — in boxing, this is an underrated one to watch. Silva (1-1, 1 KO) is an MMA legend now stepping into a boxing ring, where he hasn’t fought since 2005. Chavez (52-5-1 1 NC, 34 KOs) hasn’t won back-to-back fights since 2015-16 and is coming off a win over Jeyson Minda last November. He’s lost three of his last five fights, including to Canelo Alvarez in 2017.

The skinny: This fight isn’t getting a lot of attention, but it should be a competitive one that might pose a problem for Crews-Dezurn (7-1, 2 KOs) in this unification bout — Cederroos holds the WBA and IBF belts, Crews-Dezurn the WBC and WBO titles. Cederroos (8-0, 4 KOs) has power and might be Crews-Dezurn’s toughest fight since her debut, when she had her only career loss to Claressa Shields.

The skinny: Abdukakhorov (18-0, 10 KOs) has started to show up in bigger fights, and a win here could help propel the 27-year-old into the next class at welterweight, where maybe a big-name fight awaits. Barrionuevo (35-4-2, 25 KOs), from Argentina, lost a lopsided unanimous decision to Yordenis Ugas in 2018 — his only fight in the United States. He could offer a decent look for Abdukakhorov, but this feels like a showcase fight for the undefeated fighter from Uzbekistan.

The skinny: This is a supremely interesting non-title fight between young boxers who have gotten big chances and suffered losses. Dogboe (21-2, 15 KOs) is 26, Lopez (15-2, 6 KOs) is 25 and the winner might put himself in a good place to push for a bigger fight the next time out. Both of Dogboe’s losses came to Emanuel Navarrete, including a close unanimous decision defeat in 2019. One of Lopez’s two losses came against now-WBC junior lightweight champion Oscar Valdez in 2019 when he stepped in as a late replacement. This is a good one.

The skinny: This fight was initially going to be more interesting for the 24-year-old Munguia (36-0, 29 KOs), as he was supposed to face Maciej Sulecki. But Sulecki pulled out, leaving Munguia needing an opponent. Szeremeta (21-1, 5 KOs) steps in; in his last fight in December, he was outclassed and suffered his first loss at the hands of Gennadiy Golovkin. This won’t be the fight it could have been for the former WBO junior middleweight titlist as he continues transitioning to a new weight class.

The skinny: If you’re not familiar with either fighter, you’re likely not alone. Esparza (9-1, 1 KOs) won bronze in the 2012 Olympics and was last seen outclassing Shelly Barnett on the all-women’s Claressa Shields pay-per-view card in March. Zamora (32-6, 12 KOs), the flyweight titlist, has never fought in the United States. She’s won her last five fights, and the only bout she’s lost since 2013 was a split decision to Esmeralda Moreno while defending her junior flyweight title in 2017.

The skinny: Chavez (107-6-2, 86 KOs) and Camacho’s father, the late Hector “Macho” Camacho, fought in 1992, a bout Chavez won by unanimous decision. Now the 58-year-old Chavez is fighting Camacho’s 42-year-old son. Should this fight happen? No, probably not, but considering that in the last year there have been returns to the ring for Mike Tyson, Roy Jones Jr. and Floyd Mayweather in exhibitions and there are scheduled returns for Evander Holyfield and Oscar De La Hoya, why shouldn’t Chavez Sr. and Camacho Jr. (58-7-1, 1 NC, 32 KOs) get involved?

Crawford vs Avanesyan undercard: Cris Cyborg, more set for Dec. 10
Parker: I’ve Wanted To Fight Ryder In Same Sense I Want To Fight All The Top Super Middleweights
Jean Pascal Arrested On Suspicion of Drunk Driving in Montreal
The BN Preview: Tom Farrell aims to provide Harlem Eubank with the first test of his pro career
Panel: What sort of chance does Anthony Yarde have against Artur Beterbiev in January?