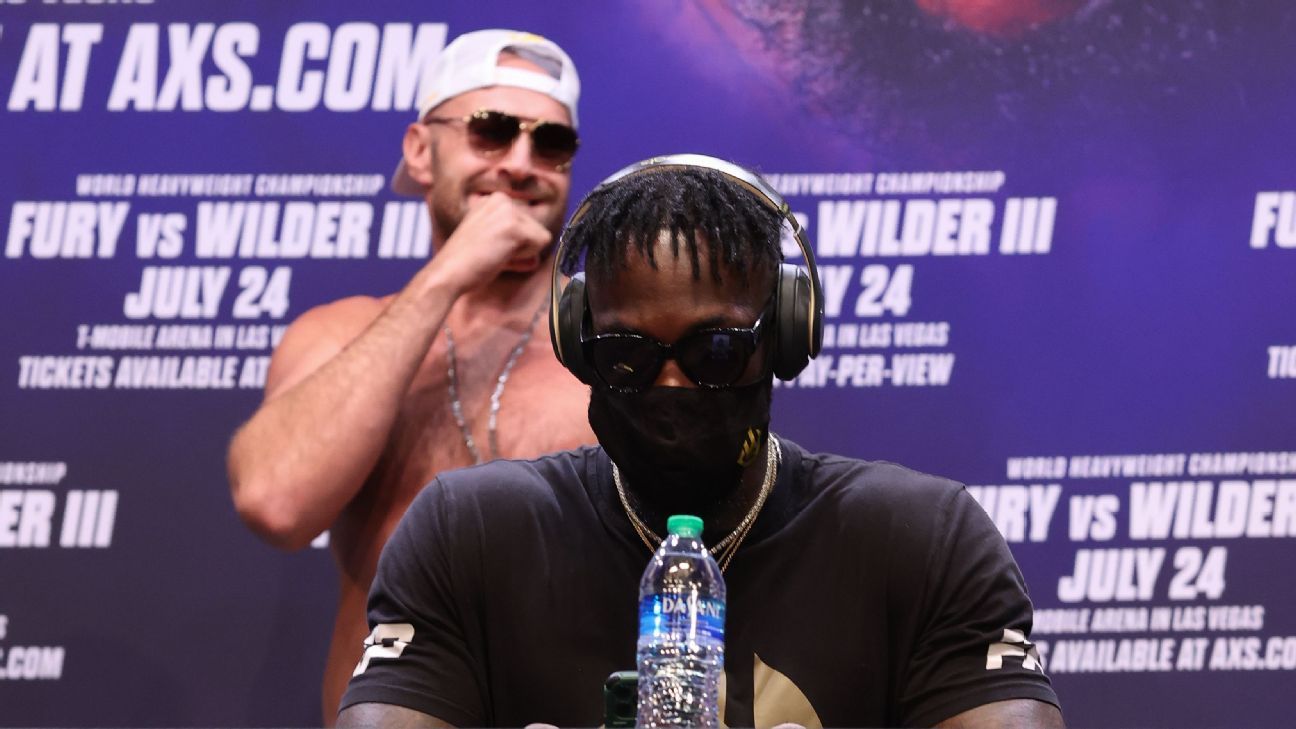 LOS ANGELES — Deontay Wilder, clad in dark sunglasses and wearing headphones with music blaring into them, stared straight ahead during Tuesday’s news conference when emcee Crystina Poncher, sitting to his right, addressed him with a question.

That was Wilder’s afternoon in a nutshell. The heavyweight boxing star gave an opening statement at the start of the event, and that was the last time Wilder spoke. He did not take any questions from Poncher or the media Tuesday during the promotional news conference for his trilogy bout with Tyson Fury at The Novo in Downtown LA, nor did he explain why.

When Fury broke from the dais to do scrums with print and TV reporters, Wilder and his team stood on stage, went backstage and then eventually left the theater. Fury and Wilder are scheduled to fight for the third time July 24 in Las Vegas. The first bout, in December 2018, went to a split draw. The second, in February 2020, was won by Fury via seventh-round TKO.

“It’s crazy,” said Fury, an England native. “He’s letting himself down, letting his fans down. Letting the people of America down, the American media. People have come here to interview him, to see what he’s got to say and promote the fight. … I’ve done my end, and it’s up to him to do his bit.”

Last year, Wilder accused Fury of altering his gloves or even loading his gloves with something heavy during the second bout. He also made comments that the weight of his entrance costume caused him to have cardio issues. But Wilder did not address either of those things — or anything else — at the first news conference with the two men Tuesday.

“He’s just not feeling it, man,” Wilder trainer Malik Scott told ESPN. “What I could say is he’s in a very violent mood. He’s been like that in training camp. He shuts down. And honestly, I don’t mind it. I think this fight sells itself. I think him not saying nothing is selling itself. Boxing is quirky. Boxing is weird.”

Fury said he doesn’t believe Wilder is “mentally, physically or emotionally involved in this fight.”

Bob Arum, Fury’s co-promoter with Top Rank, joked that maybe it’s sometimes best for fighters not to speak or they’ll get in trouble. But Arum added that the last time he remembers something like this happening was when he promoted Muhammad Ali against Leon Spinks in February 1978. Ali didn’t speak at the news conference, Arum said, and ended up losing a split decision.

“If the guy isn’t going to speak, I think he’s digging his own grave,” Arum said.

Fury and Wilder did have a staredown — one of the longest in the history of combat sports. The two were locked in on each other for more than five minutes until security and Wilder’s team finally separated them. Fury (30-0-1) is the lineal heavyweight champion, holding the WBC and The Ring titles. He said he plans to bulk up to 300 pounds for the fight and knock Wilder out with one punch. Wilder (42-1-1), one of the most feared knockout punchers in boxing history, is the former WBC heavyweight champion.

Panel: What do you want to see Derek Chisora do now following his punishing loss against Tyson Fury?
Ryan Garcia: Tank Davis is scared, never asked for early VADA testing
Fury vs. Chisora: The Timeline (Or: How did we get here?)
Clavel vs Plata unification rescheduled for Jan. 13
Chocolatito On Gonzalez-Estrada 3: “It’s Going To Be A Great Fight, A War”