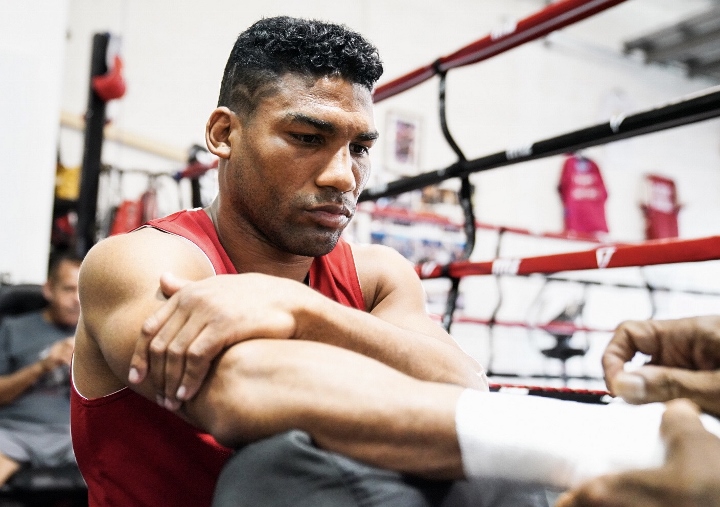 BoxingScene.com has learned that Yuriorkis Gamboa has suffered a rib injury and a lesser heel injury while training in Las Vegas and will not be able to challenge Colbert for his WBA interim super featherweight title two weeks from tonight. Premier Boxing Champions’ matchmakers are in the process of finding a replacement on short notice for the 39-year-old Gamboa.

Whoever steps in for Gamboa, Colbert’s bout will headline a “Showtime Championship Boxing” broadcast from Dignity Health Sports Park in Carson, California, over Fourth of July weekend.

The show will also include a 12-round WBA lightweight elimination match between the Dominican Republic’s Michel Rivera (20-0, 13 KOs) and Spain’s Jon Fernandez (21-1, 8 KOs). A replay of the Gervonta Davis-Mario Barrios bout, a Showtime Pay-Per-View main event scheduled for June 26 at State Farm Arena in Atlanta, also will air the night of July 3.

Brooklyn’s Colbert (15-0, 6 KOs) produced perhaps his most impressive performance in his most recent fight – an 11th-round stoppage of Panama’s Jaime Arboleda (16-2, 13 KOs) on December 12 at Mohegan Sun Arena in Uncasville, Connecticut. The 24-year-old Colbert won the WBA interim 130-pound crown in his previous appearance, a 12-round, unanimous-decision victory over Jezreel Corrales (24-4, 10 KOs, 1 NC) in January 2020 at Temple University’s Liacouras Center in Philadelphia.

The Cuban-born Gamboa (30-4, 18 KOs) is a former champion in three divisions, but the 2004 Olympic gold medalist is well past his physical prime.

In Gamboa’s previous bout, Gervonta Davis (24-1, 23 KOs) stopped him in the 12th round of their fight for the then-vacant WBA world lightweight title in December 2019 at State Farm Arena.

Despite losing his last two fights at the lightweight limit of 135 pounds, Gamboa is ranked fifth among the WBA’s 130-pound contenders.