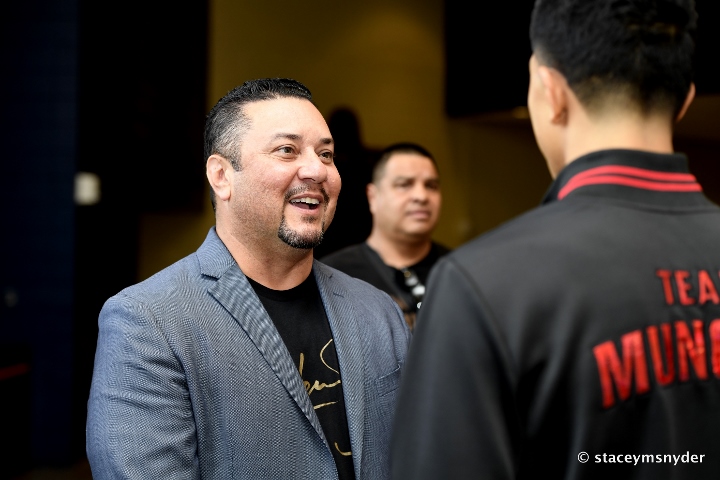 More than 20 years after Oscar De La Hoya brought big time boxing to El Paso, Jaime Munguia has the confidence of his Hall of Fame co-promoter and the Golden Boy staff of establishing his own presence in the border town.

“We have a rich history here in El Paso,” Eric Gomez, the longtime president of Golden Boy noted during Thursday’s press conference in the John J. Pershing Ballroom at Hotel Paso del Norte near the fight venue. “It started in 1998 with Oscar (who was with Top Rank at the time). For Golden Boy, we’ve had so many great champions pass through here—Marco Antonio Barrera, Abner Mares and many others.

“For us, there’s always something about Texas. Back when Oscar fought here in 1998, a little piece of his heart stayed here. [More than 45,000] people in the stands at The Sun Bowl. It’s a special place. The fans here truly appreciate boxing. I don’t know if it’s being so close to Juarez or just something in the water. But we want to keep bringing boxing here.”

That leads to its continued investment in Munguia (36-0, 29KOs), the always entertaining Mexican slugger who enjoyed a jam-packed WBO junior middleweight title reign before moving up in weight. Saturday’s fight is Munguia’s third in Texas, all coming under the guidance of co-promoters Zanfer Promotions and Golden Boy.

The previous in-state appearances for Munguia took place 50 weeks apart, outpointing undefeated Takeshi Inoue to defend his WBO title in their January 2019 thriller at Toyota Center in Houston. The bout was the third of five successful title defenses before moving up to middleweight, where he earned an 11th round stoppage of Ireland’s Gary ‘Spike’ O’Sullivan last January at Alamodome in San Antonio.

Now comes the trifecta this weekend, which is hoped to serve as a springboard to a world title shot along with further establishing a presence in the Lone Star State.

“I’m very excited to be here in El Paso,” notes Munguia. “It’s been a longtime dream of mine to fight here, where so many legends and great fighters have appeared before me. It’s an honor and privilege to be able to fight here.”

Boxing TV schedule for Aug. 11-13
Frampton: Joshua needs to bully Usyk, not sure he can do it over 12
Top welterweight contender Ortiz stops McKinson
Thomas “Cornflake” LaManna to face Saul Roman in Atlantic City
Esparza: I Think A Rematch With Seniesa Estrada Will Be Bigger Than Taylor-Serrano