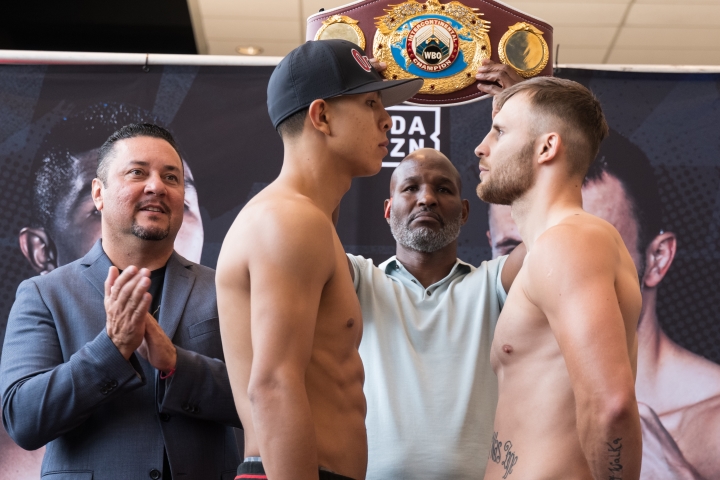 There was a time when Jaime Munguia was the sport’s most active fighter, at least at the title level.

The coronavirus pandemic and a series of postponements has slowed down his ring activity, although the former WBO junior middleweight titlist has never stopped preparing as if his next fight was around the corner.

“All I’ve been doing is working and training,” Munguia told BoxingScene.com of what is now his fourth full training camp with Hall of Fame former four-division champ and current head trainer Erik Morales. “For this fight alone, we wound up in camp for like 14-15 weeks. It was a long and tiring process but it’s always worth it.”

The 24-year-old Tijuana native—who enjoyed six title wins at junior middleweight in just a 16-month span prior to moving up to middleweight—has a chance to show it this weekend. The current middleweight contender faces Poland’s Kamil Szeremeta (21-1, 5KOs), a former title challenger who enters as a late replacement for countryman Maciej Sulecki. Their bout takes place this Saturday afternoon, headlining a four-fight DAZN telecast live from Don Haskins Center on the campus of The University of Texas at El Paso (UTEP).

“I’m going to look to really fight with [Szeremeta],” vows Munguia. “I want that knockout finish, I want to deliver for my fans.”

Munguia (36-0, 29KOs) was initially due to face Sulecki (29-2, 11KOs) this past April 24, only for the Polish middleweight contender to withdraw due to a reported elbow injury after having publicly voiced his displeasure of receiving the fight offer on roughly five weeks’ notice. Replacement opponent D’Mitrius Ballard also wound up suffering an injury late in training camp, resulting in the show getting pushed back to June 19 and with Sulecki back in the mix.

Those plans were once again compromised when Sulecki once again withdrew, this time without any offered reason. The news never truly bothered Munguia since he was able to continue training without breaking stride.

Still, there was a part of him looking forward to settling their differences in the ring after having the better part of two training camps preparing for that very style.

“I [didn’t] want to hear any excuses,” Munguia noted. “I’ve been training for a long time. We started in Tijuana, then moved camp to Otomi to concentrate more and get in shape. He [had] more time to train as well. No excuses. He should [have been] at his best and I [wanted] to beat him at his best.”

Instead, he gets a former title challenger in Szeremeta, who is coming off of a seventh-round stoppage loss to two-time and reigning IBF middleweight titlist Gennadiy Golovkin (41-1-1, 36KOs). All that can be done now for Munguia is to take care of present day business.

“We are on the rise and it means we have to keep doing things better each fight,” acknowledges Munguia, who is coming off of a seventh-round stoppage of Tureano Johnson last October 30. “We have to raise our game from the last fight. We have a great opponent in front of us in Kamil Szeremeta. All of my focus is on beating him. I am not looking past him.

“I expect an opponent who will give 100% and I have prepared at 100%. What I can guarantee is that I will deliver a tremendous performance and put on a great show for all of my fans.”

Donaire Vows To Continue Career, Eyes Chocolatito and Ioka Fights
The 10 best fights to make at cruiserweight
Frampton: Joshua needs to bully Usyk, not sure he can do it over 12
Esparza: Vergil Ortiz Is An Amazing Fighter, I Know I Gotta Hold My Ground On a Show Like This
Ortiz: I’m not concerned about keeping KO streak intact against McKinson,