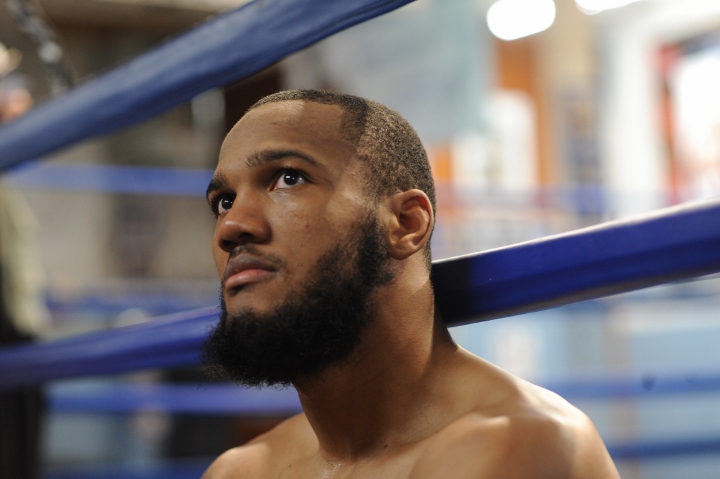 Julian Williams will have to wait yet a little longer for his comeback bout.

BoxingScene.com has learned that Williams has suffered an unspecified injury while training that has forced him to withdraw from his upcoming fight against Brian Mendoza. Philadelphia’s Williams (27-2-1, 16 KOs, 1 NC) and Albuquerque’s Mendoza (19-1, 13 KOs) were supposed to meet in a 10-round junior middleweight match Saturday night on the Showtime Pay-Per-View undercard of the Gervonta Davis-Mario Barrios bout at State Farm Arena in Atlanta.

Williams, 31, hasn’t fought since he suffered a surprising fifth-round, technical-knockout defeat to Jeison Rosario in January 2020 at Temple University’s Liacouras Center in Philadelphia. The former IBF/IBO/WBA 154-pound champion was consistently listed as a 30-1 favorite to defeat the Dominican Republic’s Rosario in that optional title defense.

Williams changed trainers after that defeat, from BoxingScene.com contributor Stephen “Breadman” Edwards to Javan “Sugar Hill” Steward. He has been training with Steward since November in Las Vegas.

Williams was supposed to fight Mendoza in a FOX Sports main event December 26 in Los Angeles, but Williams contracted COVID-19 and his return to the ring was delayed.

It was unclear at the time this story was posted Sunday afternoon if a suitable substitute could be found for Mendoza on such short notice for the pay-per-view portion of Saturday’s card (9 p.m. EDT; $74.99).

Rosario will try to bounce back from losing the titles he won from Williams to Jermell Charlo (34-1, 18 KOs). Houston’s Charlo knocked out Rosario in the eighth round of Rosario’s last fight, which took place September 26 at Mohegan Sun Arena in Uncasville, Connecticut.

Anthony Joshua Hopes Tyson Fury Clash Happens at Some Point in 2023
Astrolabio Eager For Statement Win Against Potapov in IBF Eliminator
Chris Eubank vs Liam Smith official for January 21 in Manchester
Fury: If Usyk not ready to go in Feb., bring on Joyce at Wembley
Dillian Whyte: I Won Clearly, So Why Would I Consider A Rematch With Jermaine Franklin?